The Liberal government is borrowing another $20 billion to finance its latest budget, tabled this afternoon in the House of Commons. 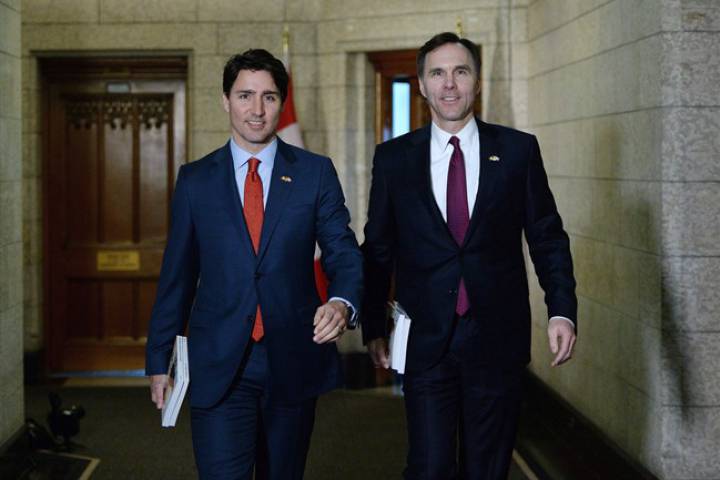 The Liberal government is borrowing another $20 billion to finance its latest budget, tabled this afternoon in the House of Commons.

The promise that Investing In The Middle Class: Budget 2019 breaks, however, is Trudeau’s previous assurance made after his government’s first, $19 billion-deficit budget in 2016: that his final fiscal plan would leave nation’s finances balanced before the country went to the polls.

Asked about this failure to keep that promise during a press conference held earlier in the day, Finance Minister Bill Morneau shrugged it off.

“I think the most important promise that we made to Canadians is that we would invest in their future,” said Morneau, whose address and Q&A was an extended supplication to the middle class, voters Liberals hope to sway to stay in power.

If they hand Trudeau a second mandate later this year, paving the way for full implementation of this Budget 2019, proposed spending therein would increase the national debt to $705 billion. More than 10 per cent of this red ink  – $72.7 billion – has been spilled under the Liberals’ watch.

And servicing this debt does not come cheap. According to Investing In The Middle Class, on top of $329.4 billion in program expenditures, the federal government would also pay $26.2 billion to service accumulated debt, or nearly eight cents of every dollar collected in revenue.

“When I think about debt issues in the country, I think about the challenge of household debt,” Morneau said before referencing his government’s changes to the income tax regime. “That’s why I am pleased that people have $2000 more in their pocket this year.”

Morneau then imagined how a typical middle class breadwinner might view his government’s track record and shared it with reporters.

“What do i hope, I hope Canadians will look at what we’ve accomplished,” said Morneau before speaking about his government in the third person. “‘These people promised to make investments into the success of my family … my family actually has more money, I have a sense of increased optimism.’”

“‘And by the way, I might actually be able to afford buying a home,’” Morneau continued.

Among the goodies contained in Budget 2019 for middle class Canadians to achieve home ownership is a “shared equity mortgage” whereby Canadian Mortgage and Housing Corporation assumes half the value of a downpayment, to be repayed at the close of the mortgage or at sale.

The budget also proposes to spend $1.7 billion over five years to establish a Canada Training Benefit for people interested in advancing their fields and others forced to seek different employment due to an evolving and volatile job market. The benefit would come in the form of an accrued credit that individuals could claim against training or tuition fees, up to $5000.

Addressing prescription drug spending that has skyrocketed from $2.6 billion in 1985 to $33.7 billion in 2018, the budget stops short of implementing national pharmacare program. Instead it promises to establish the Canadian Drug Agency to facilitate bulk-buying of pharmaceuticals that could conceivably lower costs to uninsured Canadians.

Faced with additional questions about consecutive deficits his government produced, Morneau took a swipe at the previous Conservative government.

“Their idea is to balance the budget at any cost,” he said. “If we had taken that approach we’d be in a very difficult spot.”