After Yelp announced plans to place alerts on businesses accused of "racist behavior," an Antifa group responsible for organizing the violent Portland riots is now compiling a blacklist of pro-police and anti-Black Lives Matter companies. 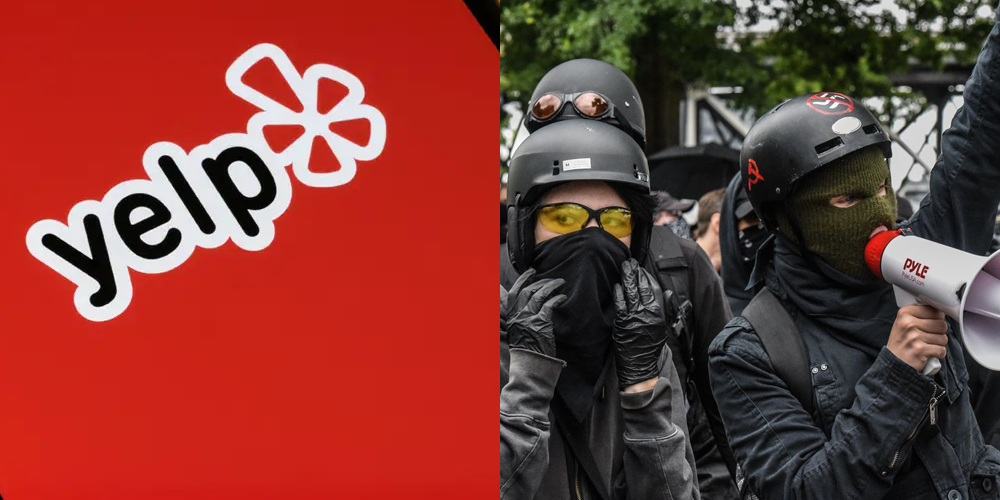 After Yelp announced plans to place alerts on businesses accused of "racist behavior," an Antifa group responsible for organizing the violent Portland riots is now compiling a blacklist of pro-police and anti-Black Lives Matter companies.

@safePDX, an abolitionist collective "keeping protesters safe from state violence," declared Thursday that the organization is moving to compile a list of "non-friendly" businesses in Portland that is "hanging blue lives garbage in their store or anything else that's anti the BLM movement." Then the private account solicited more than 6,000 followers to "[d]rop them below" in the replies.

Portland Sound Bloc—known as "Rob" in a Portland Monthly article who blasts nightly music with his speakers—reported Brothers Cannabis Dispensary for "pro-cop sh*t in the windows."

To which, the alleged minority-owned business with a majority of minority employees defensively responded to the accusation: "What Pro-cop thing are you talking about? Are you referring to this portland police alarm permit we are required to display since day one?" According to the city's website, Portland requires business owners with alarm systems to maintain an annual permit.

Then Small Pharaoh's Falafel was targeted, a downtown Middle Eastern stand that sports a giant "Trump 2020" poster littered with phrases on both sides of the political aisle such as "We support our Portland Police" and "Black lives matter. Muslim lives matter. All lives matter."

"F**k the racism, f**k the media, f**k the press," the sign reads. "If we are looking for peace and justice, we should have some respect and morals."

One Twitter user pointed a finger at Hollywood Beverage and Liquor, self-described as the "oldest liquor store" in all of Oregon, tracing the 5,000 square-foot store's lineage back to 1934—just after the repeal of Prohibition. On the company page, operator Dan Miner reportedly expresses his state pride by introducing his customers to local products and seeking out local craft beers and wines to stock his shelves.

Another user responded: "Really? Sh*t. They are the best liquor store near me. Oh well." The "vehement antifascist" added, "Bye bye to them."

Hollywood Beverage and Liquor was previously "exposed" over two weeks ago by @86dlistPDX on Instagram, a snitch social media account that screenshots "racist" posts and anecdotes testifying discriminatory allegations as evidence against the accused. "86'd" is slang in the restaurant industry for ejecting customers from the premises based on their behavior.

An aircraft-sized Trump flag is cited in the manager's office. In June, Miner posted a mask selfie that boldly emblazoned an American-designed skull donning President Donald Trump's signature blonde hairstyle. "The sole redeeming aspect of the oppressive mandate to wear a mask is the great number of times a day I pull it off and appreciate the smell of freedom." In addition, a photoshopped image of Trump's head on a rockstar brands the owner's Facebook profile picture.

Then in April, Miner called liberalism and the victim mentality "mental disorders" in accordance with a Land O' Lakes meme that criticized "how American" it is that leftists "got rid of the Indian and kept the land."

The week of the expose, Miner wrote "hard pass" to climate change mitigations in his daily life. Days later, Miner sent his quarterly taxes to the "commie government" with a post-it note attached: "Please direct all funds to the police so I can stop being burgled!"

"Get your booze elsewhere. F**k D*nald Tr*mp," the anti-fascist 86 the Abuse captioned the smear campaign of Miner.

Conservative columnist Rita Panahi commented: "Businesses are going to be coerced into supporting certain groups to avoid being targeted. It’s tantamount to extortion."

This is akin to business owners writing "black-owned" on their storefront as widespread looting ravaged their hometowns. Burglars called theft "reparations," while hard-working residents feared for their livelihoods dismantled by the mob.

Still over the summer, protesters in Kenosha set "much of the black business district" ablaze when rioters rampaged over the white-on-black police shooting of Jacob Blake.

During the first and only vice presidential debate Wednesday night, Vice President Mike Pence named his guest, the owner of a Minneapolis hair salon shop that was destroyed amid the Minneapolis riots. In the wake of George Floyd's death, her shop was torched even though "Black owned" was spray painted on the exterior.

Flora Westbrook, the owner of Flora's Hair Design, showed the wreckage to Pence and Ivanka Trump while on their last month trip to promote Trump's law-and-order message in Minnesota.

"Just a few weeks ago, I stood at what used to be her salon that was burned to the ground by rioters and looters. And Flora is still trying to put her life back together," Pence explained.

This comes as Yelp—a crowd-sourced platform for reviews—released a new consumer alert system "against racism" on Friday. "In the last few months, we've seen that there is a clear need to warn consumers about businesses associated with egregious, racially-charged actions to help people make more informed spending decisions."

"Now, when a business gains attention for reports of racist conduct, Yelp will place a new Business Accused of Racist Behavior Alert on their Yelp page to inform users, along with a link to a news article where they can learn more," Yelp's official Twitter account wrote, linking a blog post that further elucidates its pandering to the BLM movement.