Chants of "USA" could be heard from the pro-police crowd. Antifa responded to the group by chanting, "Death to America." 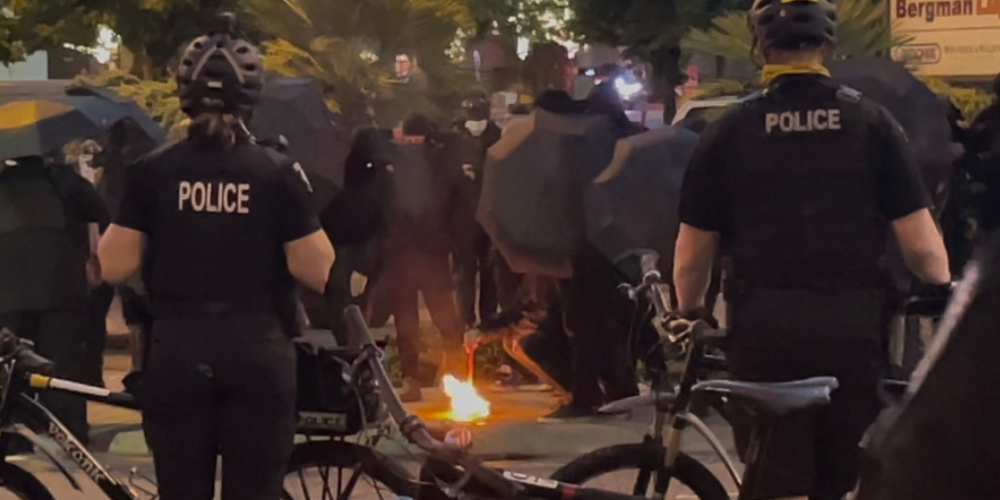 Multiple groups, including Antifa, organized protests for the event which prompted the Bellevue Police Department to take quick action to prevent criminal lawlessness from happening in their city.

BPD sent out an alert to the community on Twitter. "ALERT: We’ve learned of a planned protest in Downtown Park on Tuesday, May 11th at 7:00 pm. Currently, we're unsure how large or if they plan to remain peaceful. There’s a strong possibility the group may leave the park. We will update this info as we learn more."

Antifa met at the Downtown Bellevue Park around 7pm, just blocks away from the Hyatt Regency where the law enforcement appreciation dinner was being held.

During the time Antifa was meeting at the park, pro-police groups rallied outside the Hyatt Regency to show support for law enforcement and their families as they attended the event.

Around 8pm, Antifa left the park and began marching in oncoming traffic towards the Hyatt Regency Hotel. BPD bike officers and patrol vehicles trailed closely behind them, leaving the group no room for crimes to be committed.

Officers with the Seattle Police Department CRG Task Force were also on the ground assisting the Bellevue Police Department with the protest. Earlier in the evening as SPD arrived in Bellevue, an individual assaulted an SPD bike officer. The suspect was promptly arrested at the scene.

As Antifa continued marching through Downtown Bellevue, BPD ordered them to remain on the sidewalks (which they refused) and questioned why they had umbrellas given rain was not in the forecast.

"It’s a clear night. There’s no rain. In past events umbrellas have been used to conceal criminal activity like vandalism. Vandalism will not be tolerated in the City of Bellevue. Neither will acts of violence," BPD announced. "You have the right to exercise your first amendment rights in a peaceful manner, but again, we will not tolerate acts of violence or property destruction."

The group of activists made their way back to the Hyatt Regency and attempted to confront the pro-police crowd, but officers intervened and separated the two groups thus preventing them from clashing.

Outside the Hyatt Regency, chants of "USA" could be heard from the pro-police crowd. Antifa responded to the group by chanting, "Death to America." According to witnesses a female employee from the nearby restaurant Earl's Kitchen, joined with Antifa in shouting "F*** the police" and other insults against the police.

Antifa militants shielding themselves behind umbrellas began to vandalize an American flag then proceeded to light it on fire.

The law enforcement officers monitoring the protest dispersed from the scene shortly after. Antifa militants marched over to the pro-police group which forced the police to return and separate the two crowds.

The protest ended after law enforcement officers asked the pro-police group to leave in an attempt to get Antifa to go home for the night.

Despite threats of violence and multiple planned protests, law enforcement officers across the state attended the appreciation dinner with their families and told The Post Millennial that they "had a great time."