A militant Antifa doxxer is soliciting the public for identifying information of those who participated in the peaceful "Trump Boat Parades" that took place across several US states over the weekend. 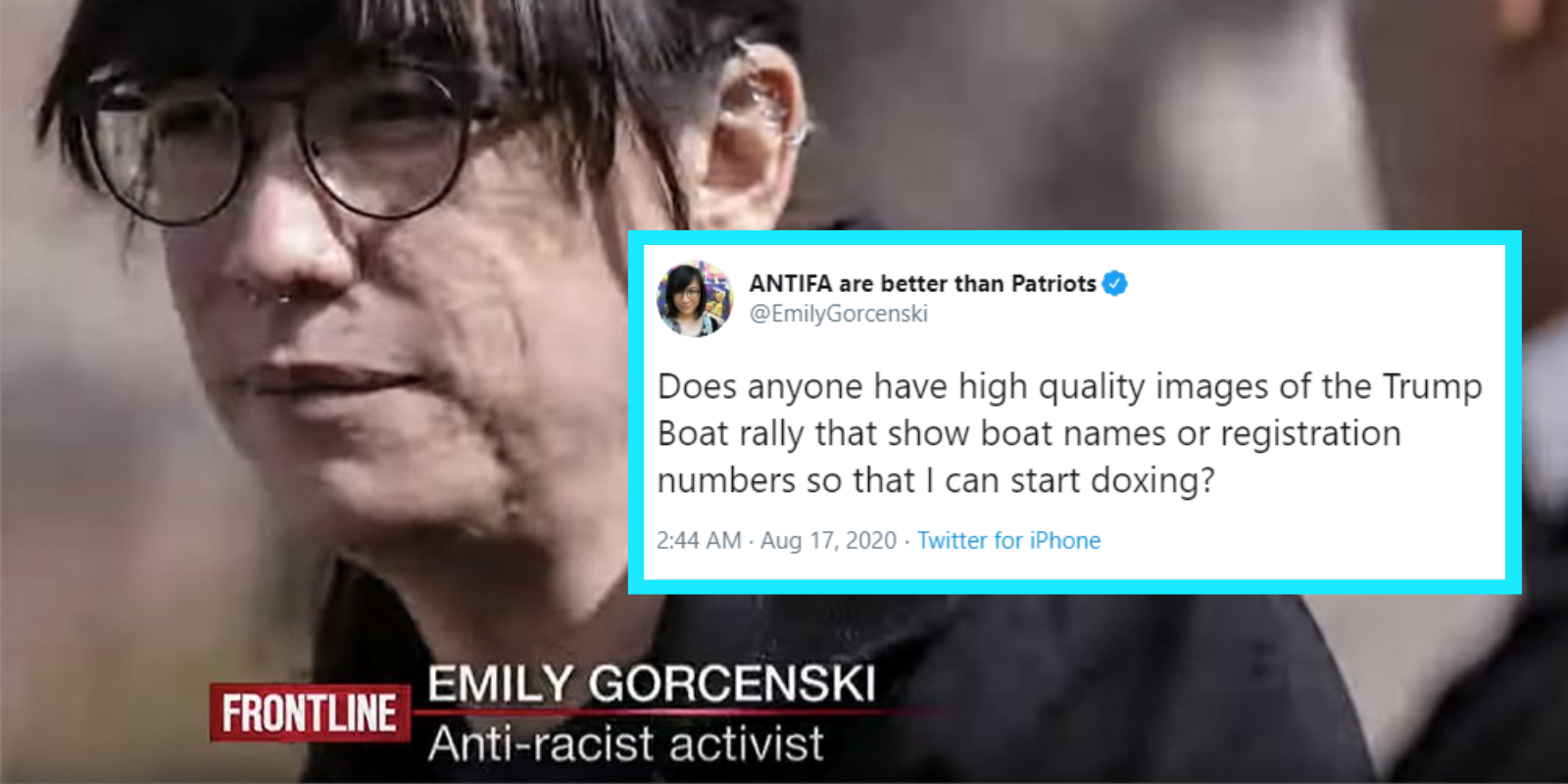 A notorious Antifa doxxer was soliciting the public for identifying information of those who participated in the peaceful "Trump Boat Parades" that took place across several US states over the weekend.

"Does anyone have high quality images of the Trump Boat rally that show boat names or registration numbers so that I can start doxxing?" Emily Gorcenski—who once attracted the support of the 2019 Dayton mass shooter and Antifa sympathizer Connor Betts—asked her extremist fanbase late Sunday night.

Reportedly more than 1,810 boats filled with President Donald Trump supporters had set sail in Clearwater, Florida, on Saturday, attempting to break the 2014 Guinness World Record for largest boat parade. On Sunday, an estimated 20 boats flying Trump 2020 flags sped down the Willamette River in Portland, Oregon. The large waves formed had reportedly caused a nearby boat to sink with passengers onboard, The Independent reported.

Gorcenski, an American, previously fled to Germany, which ironically has strict privacy laws given its Cold War past with the Federation of Antifascists, a communist regime accused of spying in the East.

"I live in *Germany* you dim f**king lightbulbs," Gorcenski told 4chan users attempting to dox her back.

"Congratulations on using whitepages dot com, tho, you incompetent nitwits," she taunted from overseas.

A Twitter user speculated that this "crime laundering" tactic is "a technique used by Antifa to frustrate [law] enforcement by exploiting the international nature of the Internet."

Another asked Twitter's official safety account as well as its co-founder and CEO Jack Patrick Dorsey: "Are we just going to allow this Blue check mark to threaten people with doxing?"

She responded, "he probably is," including a screenshot of Dorsey's profile picture alongside the "Follows you" tag.

Community members also filed a complaint against her profile biography, which still reads: "Rude to racists. Opinions only mind."

Twitter admins responded with the same conclusion as before. "Accordingly, we have not taken any action at this time. Sincerely, Twitter," moderators signed off.

The Post Millennial reached out to Gorcenski for comment on the solicitation incident. She replied: "There was no doxing and no doxing instigation."

"I will be extremely careful to point out that since no doxing happened, no twitter rules were broken, so none of the reports were successful, and they accomplished nothing more than proving that right wingers are afraid of the antifa bogeyman," she added and then tweeted out the full direct message conversation.

Gorcenski tweeted earlier that she "trolled the entire right wing" and wrote about it in a blog post.

"Recently, I decided to prank the American right," she began, inserting the doxxing inquiry.

"They insisted that doxing is illegal while linking to a page that says quite explicitly that it is not. They called out to the FBI and the CIA. They cried to Jack, the CEO of Twitter. When they found out that Jack follows me on Twitter, they cried that Twitter is biased against conservatives," Gorcenski continued, mocking users' so-called "double-down on playing the victim card."

"They reported me multiple times to Twitter—none of them succeeded, because despite their desperate cries for victimhood, my tweet wasn't against the rules, the law of any nation, or even basic morality," she concluded.

The misgendering charge levelled against Zuby was cited under Twitter's "hateful conduct policy."

"You may not promote violence against or directly attack or threaten other people on the basis of race, ethnicity, national origin, caste, sexual orientation, gender, gender identity, religious affiliation, age, disability, or serious disease," Twitter admins told the rapper.

When Zuby appealed, Twitter's support team determined that "a violation did take place" and therefore refused to overturn the decision.

Emboldened, Gorcenski went on a reporting rampage, screenshotting her Karen-like actions. "I’M ENFORCIN’" she captioned the collage, adding that "I can truly do this all day long."

In February 2019, Gorcenski doxxed an innocent man whose reputation was allegedly dismantled in a twisted case of "deep identity theft."

"Ok, it's time for this. I've confirmed the id. This one isn't pretty. This one might get me killed," she prefaced the doxxing thread.

However, she admitted that "[t]his work" was not hers. "A comrade pointed me to this dox," Gorcenski clarified.

The first clue to Vanguard's identity was the head unit that read "[REDACTED]'s Galaxy S7." His first name was further corroborated by screenshots of the the top right browser, presumably revealing his last name as well.

Gorcenski explained how his post history detailed "extensive content" about his studies as an M.B.A. student at the time, experiences as an undergraduate, and father's degree.

She claimed that Vanguard outed himself with a particular image, who captioned it "might be doxxing myself."

"Indeed sir, you are," she chastised. Then she shared a self-posted picture of Vanguard's truck and his house.

"But most importantly, he mentioned an op ed about campus carry at his university that he wrote. And that seals it," she emphasized. Gorcenski linked the speculated article that overlapped his years of attendance at the university.

Moving on to Vanguard's other social media platforms, Gorcenski connected that one of Vanguard's Facebook posts was timestamped within minutes of one of his posts on Discord.

Mid-thread, Gorcenski admitted that she "cannot say conclusive that [REDACTED] is Vanguard."

"But the amount of correlation here is uncanny, and the timestamps of extremely unique content suggest that either it is him or someone very close to him trying to impersonate him," she continued, calling both subjects "threats to national security."

Gorcenski then posted Vanguard's house for a second and third time, captioning: "That ['godd*mn underground'] lair is being used for some sh*t."

Continuing, she revealed where he currently worked, accusing him of "using his white nationalism connections to hire more people..."

"You are so strong Emily. Be safe," a fan commented on the doxxing thread.

Later on, Gorcenski reportedly spoke with the subject of interest, who provided her with information that indicated he was "likely the victim of a deep identity theft, and there are some credible details to suggest that this is true."

Vanguard was someone who had deep access to the victim's details, using his alleged military experience to cultivate the assumed identify for over a year, Gorcenski wrote.

"I apologize to [REDACTED] for the mistaken identity. We both share concerns that his identity can be so deeply stolen. I've spoken to him and his wife and they are both gracious people (as always, don't contact them!)," she backtracked in a follow-up tweet.

Fortunately, the victim was able to reconcile with his employer at his guard base.

"There are reasons why I always say 'do not contact family or employers,'" Gorcenski retraced and justified her actions.

"I'm doing this for public safety, not revenge," she concluded.