On one of the dark web's most malicious sites, Antifa doxxed the black Trump supporter, who was stabbed by an Antifa militant and convicted pedophile in a Portland riot, and his entire family. 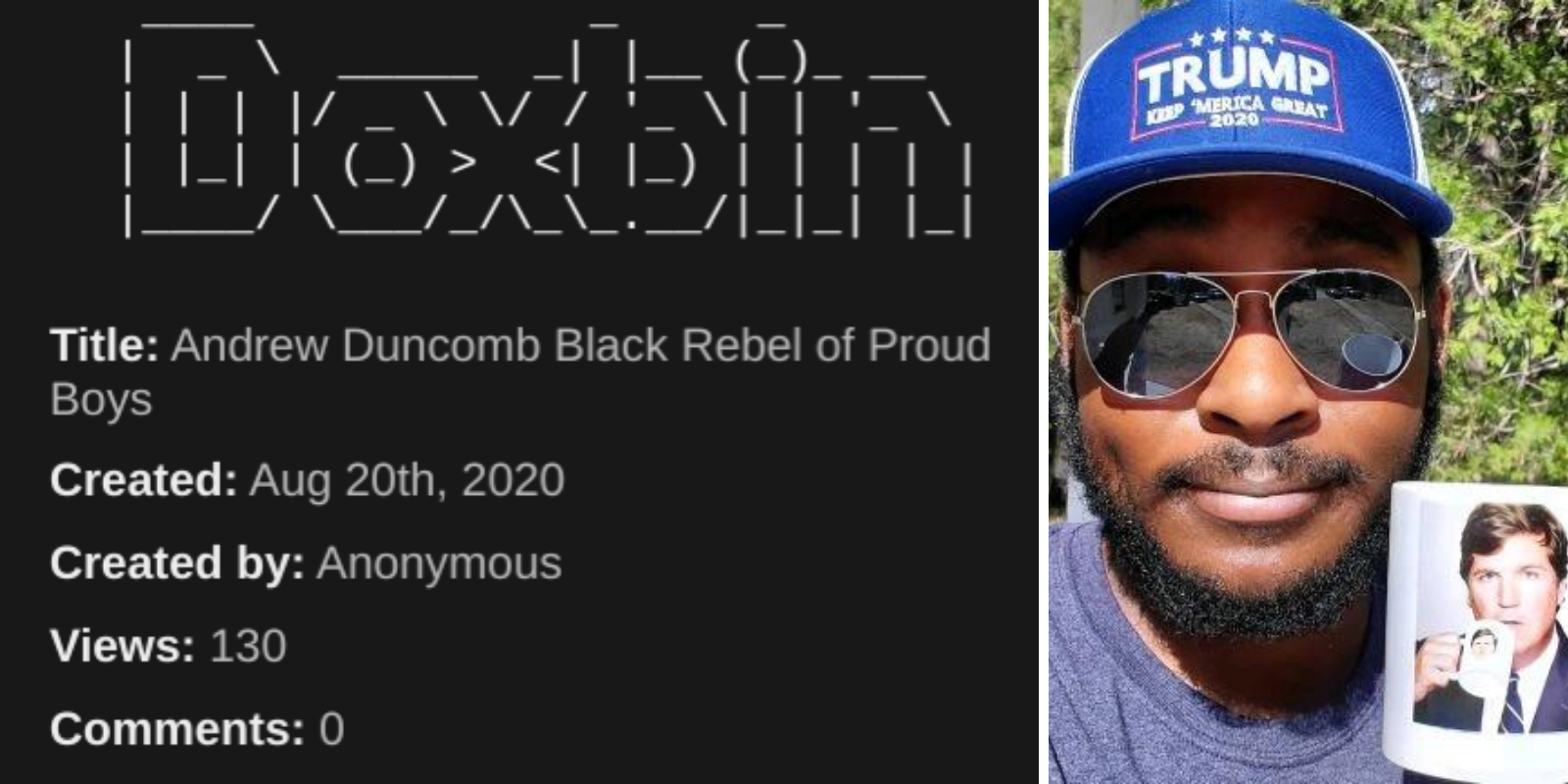 On one of the dark web's most malicious sites, Antifa doxxed the black Trump supporter, who was stabbed by an Antifa militant and convicted pedophile in a Portland riot, and his entire family.

Doxbin invites users to contribute personally identifiable information, or "dox", of any person of interest. It was previously operated on the darknet as a Tor hidden service. Then an international police initiative, titled "Operations Onymous," seized Doxbin as well as other sites publishing social security numbers, bank routing information, and credit card information. Since its takedown in 2014, Doxbin is hosted on the world wide web as well as the dark web.

Anonymously created on Aug. 20, a Doxbin page with 130 views to date of Andrew Duncomb's personal information was compiled in extensive detail by Antifa agents, which Duncomb acknowledges is mostly accurate.

Citing his alias on Twitter, doxxers dubbed Duncomb the "Black Rebel of Proud Boys," which Duncomb disputes. The top of the page taunts: "What are you proud of?"

"If you read the threads from top to bottom, there's plenty good reason for DOXXING this individual," the doxxing storage site prefaces Duncomb's profile.

The Portland-based Antifa group called Duncomb a "neo-confederate slavery apologist" and "another Proud Boys hate group affiliate" who the organization claimed he participated in the 2017 Unite the Right rally in Charlottesville.

Duncomb has been present in the Pacific northwest as a conservative videographer. Rose City Antifa loosely connected Duncomb appearing at pro-Trump events organized by Sandy Backs The Blue and Alan Swinney, among "other associates of the neo-fascist Proud Boys hate group." However, the Antifa account snided that "[i]t is unknown if Duncomb ever personally associated with the group."

"My family has been doxxed by a domestic terrorist organization group," Duncomb told The Post Millennial. "I don't think anyone else in my family would vote for Donald Trump, so if they're targeting me for political reasons leave my family out of it."

"I hope someone will intervene and get that domain taken down. This is just one of their tactics for intimidation," Duncomb concluded.

Under Doxbin's frequently asked questions, paid instant removals via Bitcoin are available, but the site notes that no "valid paste" will be removed unless content contains prohibited material: third party links to underage explicit images, hit information on children under the age of 15, support of terrorism, dox requests, spam, "attempting to infect other members," requesting dox to be unindexed from Google which "doing so will result in your dox never being removed," reposting the same dox, and threatening someone physically.

"What this means is that if your info goes up, it's not coming down unless it's bad, old, inaccurate or we receive a court order from our server hosted country," Doxbin officials wrote.

Admins assert that Doxbin is "completely legal" so long as information is not obtained illegally, whether through hacking or stealing directly from an individual. "(Can anybody prove it? Not unless you brag about it)," moderators gloat.