Ricci Sergienko, a Los Angeles Antifa militant, was arrested and taken into custody by LAPD during the uprising, which a city council member compared to the Jan. 6 riot at the US Capitol. 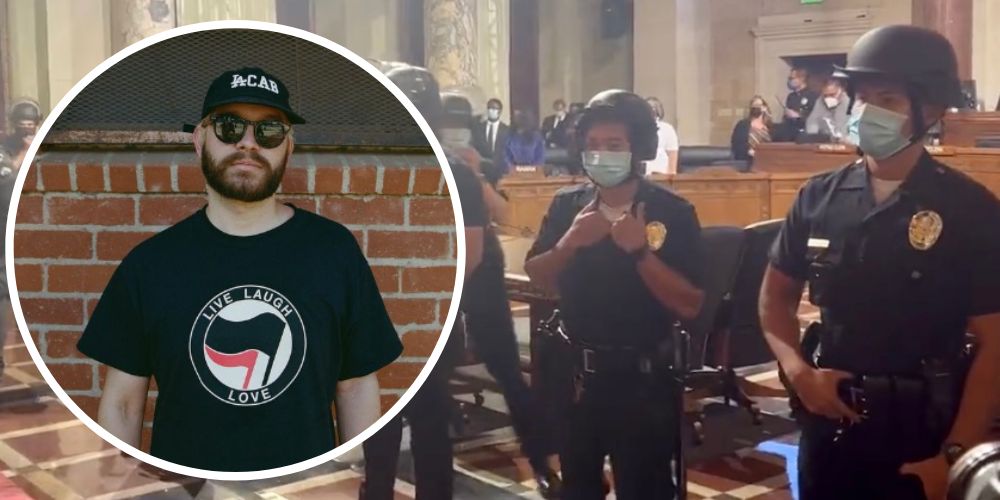 Riot police had to be deployed on Tuesday during a Los Angeles City Council meeting when far-left extremists, including members of Antifa, violently attempted to prevent city council members from voting to ban homeless encampments around schools and daycare centers.

Ricci Sergienko, a Los Angeles Antifa militant, was arrested and taken into custody by Los Angeles PD during the uprising, which a city council member compared to the January 6 riot at the US Capitol, The Post Millennial editor-at-large Andy Ngo reports.

The group of far-left extremists have been threatening the Los Angeles City Council over the vote for several weeks and attempted to shut down last week's meeting as well.

According to a video taken by Spectrum News, police detained two individuals when members of the group jumped over police barriers and charged at Martinez while yelling obscenities.

The group of unruly far-left extremists can be heard yelling, "let them go" as police removed the violent agitators from the property.

After the volatile incident, Democrat city council member Paul Kortez stood behind the podium and called out the "band of anarchists" that have been violently threatening city council to prevent the removal of dangerous homeless encampments around schools and children at daycare centers.

"We have to take some action," Kortez said, speaking on the public safety concerns surrounding the encampments. "This is the right thing to do."

"Just because Kenneth...and his band of anarchists tried to break up two different meetings...We're not going to stand for it and we're going to take the action that we need to take," Kortez said sternly.

"I've been here for a number of years and I've never witnessed anything like this. Some people that spoke earlier today were offended by the fact that we compared what happened last week to what occurred in our nation's capitol on January 6, but I do believe this is one step closer to that," Martinez explained on Tuesday.

"Jumping over a barrier and putting other people's lives at risk, that cannot be the norm around here. We cannot legislate in fear. We cannot tolerate this kind of behavior," Martinez said.

Despite multiple members of the group being taken out of the property by police, only Ricci Sergienko was taken into custody, according to Antifa Watch.