Many members of Antifa were armed with various different weapons. Reports indicate that that two members were seen with AR-15's and SKS rifles. 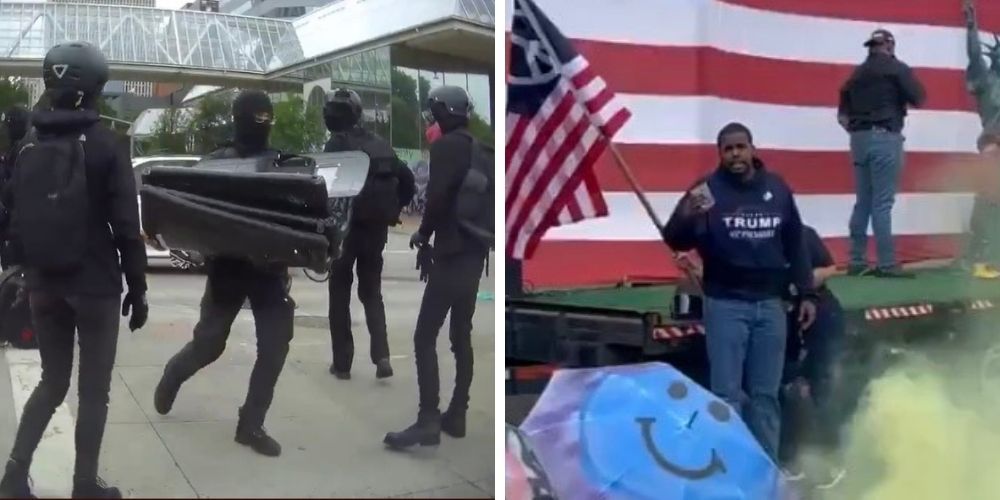 Antifa militants violently disrupted a right-wing event in Portland, Oregon on Sunday and instigated various acts of violence which led to clashes between opposing groups, according to reports.

Hundreds of black bloc Antifa arrived at Portland's Waterfront Park on Sunday to counter-protest the "Summer of Love: Patriots Spreading Love not Hate" event which was scheduled to begin at 2 PM. However, the right-wing group moved to a different location at an abandoned K-Mart parking lot in NE Portland to escape threats of violence.

Many members of Antifa were armed with various different weapons. Reports indicate that that two members were seen with AR-15's and SKS rifles. The Portland Police Bureau announced Friday in a press release that law enforcement officers would not be intervening to protect residents from the riotous activity expected to take place.

Despite changing the event location, a large group of Antifa militants dressed in black bloc arrived at the small patriotic-themed rally across town and disrupted the event. Antifa launched an attack and threw explosives into the diverse crowd upon arrival.

A white van that transported members of Antifa crashed near the right-wing rally which resulted in violent clashes in the street between opposing groups, witnesses believe the crash was an attempted vehicular assault although reports remain unconfirmed.

Though not outnumbered, Antifa eventually ran and retreated from the riot after throwing homemade explosives at the right-wing group. Members of Antifa were also seen throwing smoke bombs and firing paintball guns. Both groups released chemical spray in defense. Reports also indicated that Antifa militants damaged windows to a truck in the parking lot at the event.

In response to the van crashing near the event, members of the right-wing group busted out its windows and flipped the vehicle over in retaliation to the political violence perpetuated by Antifa.

After Antifa dispersed from the event and retreated back to the Downtown corridor of Portland, there were reports of shots fired. Video evidence shows a male suspect firing a handgun as well as bullets whizzing past him. The incident resulted in no injuries.

Portland police officers responded to the scene and made an arrest. Antifa reported that the man was firing at them. However, it appears Antifa gathered evidence that could implicate their side as police officers struggled to locate shell casings that should've been in the direction towards the male firing his handgun in the video.

In addition, Antifa committed acts of violence towards a street preacher, members of the press, and assaulted a homeless man that had a "don't tread on me" bumper sticker on his car.

Once the opposing groups dispersed, Antifa erected an "autonomous zone" at Salmon Springs Park in Downtown Portland. A vehicle arrived at the autonomous zone and passed out riot shields and gear to the group of Antifa.

The Portland Police Bureau released a statement in response to Sunday's events and said further arrests will be made once they establish probable cause that can tie specific individuals to crimes.

"There were no immediate arrests, but detectives are reviewing evidence to determine whether charges can be brought for any criminal activity. As stated before today's events, officers were not deployed to stand in between individuals intent on confronting one another. But that does not mean the crimes committed will not be addressed. Arrests do not always happen in the moment. As in past such events, we are conducting follow-up investigations, gathering evidence, and will make arrests when probable cause exists that specific persons committed crimes. Just because arrests are not made at the scene, when tensions are high, does not mean that people are not being charged with crimes later," PPB said in a statement.

Earlier this month, Antifa assaulted families and children at a Christian worship event in Downtown Portland.