Five gunshots were heard during the Medical Freedom protest Saturday afternoon. Video footage showed Samoan right-wing activist Tusitala "Tiny" Toese on the ground in pain and bleeding from his foot. 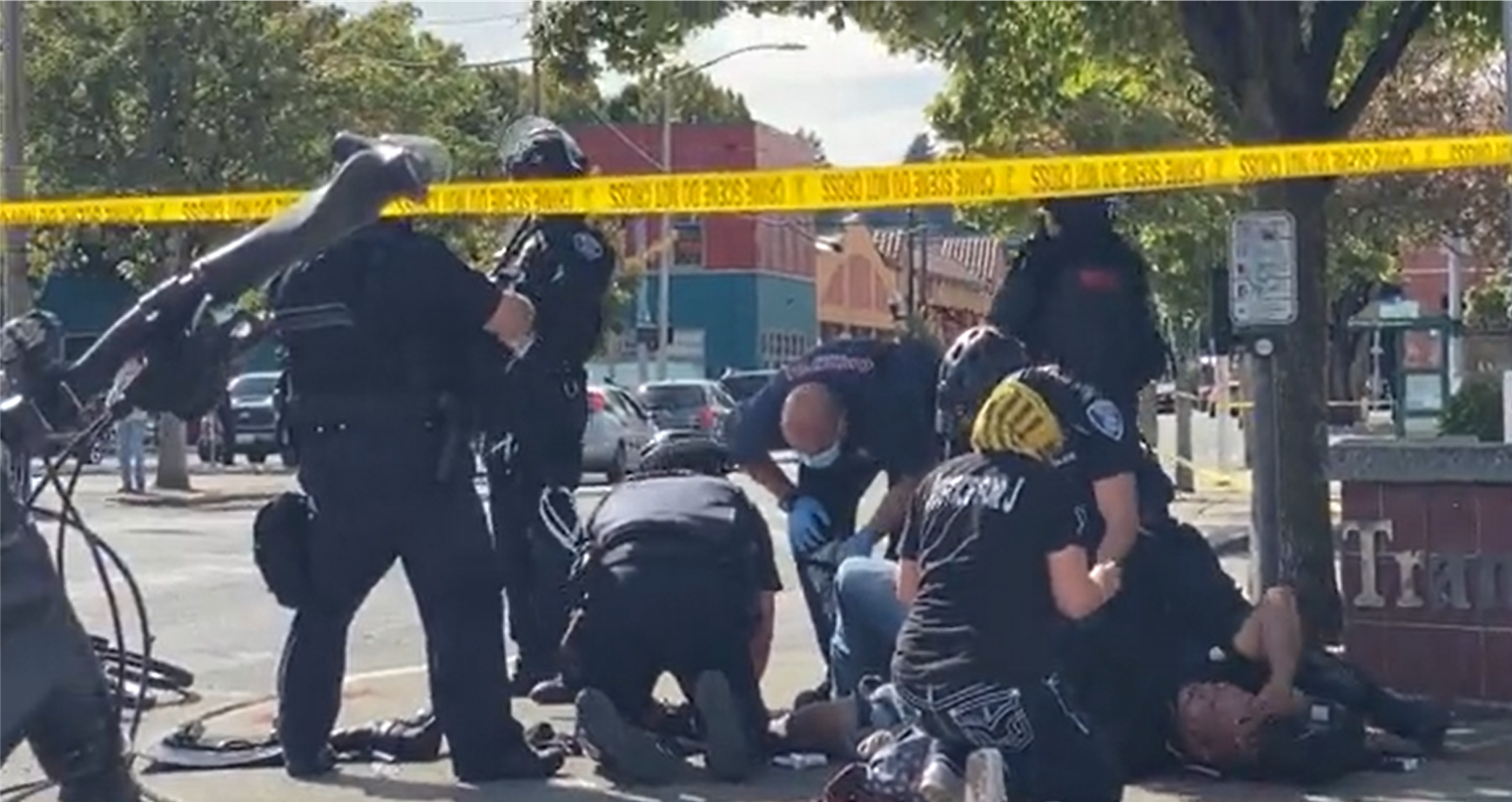 A right-wing activist was shot in the foot during a conflict with Antifa on Saturday. Antifa showed up to counter protest against a demonstration opposing Democrat Gov. Jay Inslee's COVID-19 mask and vaccine mandates in Olympia, Washington.

Ahead of the direct action, Antifa had called for comrades to appear at the Proud Boys-attended event outside the Washington state Capitol.

Five gunshots were heard during the Medical Freedom protest Saturday afternoon. Video footage showed Samoan right-wing activist Tusitala "Tiny" Toese on the ground in pain and bleeding from his foot. Fellow protestors offered assistance and can be seen taking off Toese's shoe as he lay on the sidewalk writhing in pain.

A man can be heard yelling in one of the videos, "Tiny got shot in the leg."

Protestors allegedly began searching for shell casings at the bus stop next to where the shooting occurred as paramedics arrived. Local police taped off the area.

Toese had previously been placed on Antifa's "kill list" during the far-left occupation in downtown Portland, Oregon, on Aug. 22.

Antifa propaganda accounts across social media celebrated the shooting with a meme similar to the one that mocked the death of Air Force veteran Ashli Babbitt.

Antifa member Melissa Lewis urged whoever recorded the Antifa shooting of Toese to not release it to the public. Antifa accounts had also spread disinformation on social media alleging, without evidence, that Toese shot himself.

Video before the shooting showed the event's right-wing security going toe-to-toe with Antifa before the shooting and the group marching down the streets of Olympia, chanting "F— Antifa." Witnesses and streamers claimed that Antifa shot at them while they were running and then fled on a bus.

Antifa-affiliated social media accounts claimed that during the protest, the Proud Boys chased down several protesters and assaulted Antifa member Alissa Eleanor Azar, a far-left activist who tweets about Antifa events, engages in brawls, and has been arrested for her involvement in Antifa's activities. Video footage does not show her being beaten but does show protesters yelling at her.

Following the shooting, Antifa held another event to honor admitted Antifa militant Michael Reinoehl, the suspected shooter of Trump supporter Aaron "Jay" Danielson who was killed last year after participating in a pro-Trump caravan which drove through Portland. The digital Antifa flyer advertising the separate Saturday event read, "Jay [Reinoehl's victim] got what he deserved."

Reinoehl was killed in a shootout with authorities in Lacey, Washington, when authorities arrived to arrest him for Danielson's murder. Thurston County Sheriff's Office announced in March the conclusion of its investigation into the task force that confronted Reinoehl, finding that he shot at US Marshals first.