The Associated Press admitted it "erroneously reported" based on information provided by the Mississippi Department of Health that 70 percent of recent calls to the Mississippi Poison Control Center were from residents who had ingested the ivermectin version meant for animals. 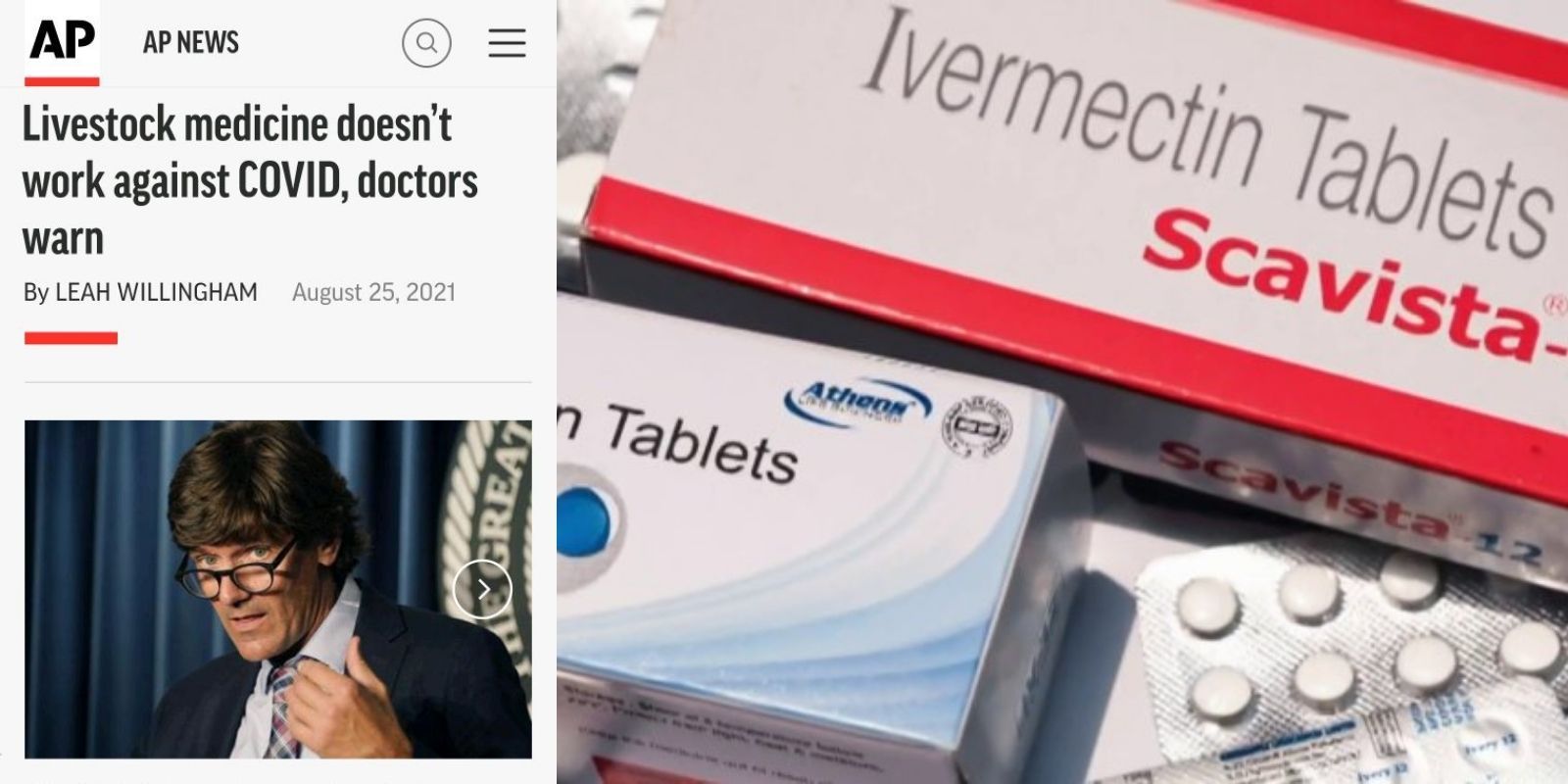 It's been revealed that the Associated Press has issued an embarrassing correction to its fear-mongering article claiming that 70 percent of calls to Mississippi Poison Control were about ivermectin ingestion. The actual number was 2 percent.

In an article published Aug. 23 about patients taking livestock medicine to try to treat the coronavirus, the Associated Press admitted it "erroneously reported" based on information provided by the Mississippi Department of Health that 70 percent of recent calls to the Mississippi Poison Control Center were from residents who had ingested the ivermectin version meant for animals.

The Associated Press updated the story on Aug. 25, entitled "Livestock medicine doesn't work against COVID, doctors warn," to correct that the number of calls to poison control about ivermectin was about 2 percent. Incorrect information provided by the Mississippi Department of Health had said the number was 70 percent, the Associated Press noted at the end of the report.

Before the correction, the Associated Press wrote that at least 70 percent of recent calls to the Mississippi Poison Control Center have been related to ingestion of livestock or animal formulations of ivermectin purchased at livestock supply centers, according to the state Department of Health officials. However, the exact number of total calls received were not specified at the time.

Now the current Associated Press report reflects that it was at least 70 percent of the 2 percent of recent poison control calls regarding the anti-parasite medicine.

Another version of the correction issued reiterated that the number of ivermectin-related calls to poison control was about 2 percent. And of those calls, 70 percent were by patients who had ingested the veterinary version of the medicine.

Based on the corrected Associated Press figures, the Daily Wire calculated Monday that a grand total of 1.4 percent of the calls to Mississippi Poison Control were from patients who had ingested the livestock form of ivermectin.

"And, as usual, the fake news from AP spread far and wide before the correction came out," commented Christina Pushaw, the press secretary for GOP Florida Gov. Ron DeSantis who has faced punishment herself from Twitter staff over another dispute in mid-August with the Associated Press's coverage.

The drama began when the wire service published an Aug. 17 story headlined: "DeSantis top donor invests in COVID drug governor promotes." The Associated Press story suggested that the GOP leader was touting an antibody treatment for COVID-19 manufactured by Regeneron as a favor to hedge fund CEO Ken Griffin, a top multimillion-dollar donor who had contributed almost $11 million to a pro-DeSantis group and whose firm owns about $16 million in shares of Regeneron.

Pushaw had lambasted the Associated Press reporter's story that insinuated that DeSantis had sought to promote the treatment to boost company profits.

The debate waged between the right-wing government official and the member of the corporate media; Twitter sided with the latter. In the Big Tech giant's eyes, Pushaw, working for the Florida governor, wasn't allowed to castigate what she saw as media misinformation. Twitter's policing force deemed it appropriate to lock out the spokeswoman for 12 hours over claims of "abusive behavior."

"None of the #churnalists corrected their stories. The lies stay up. Few people see the correction. But you're not allowed to notice. If you notice, they will call you a bully," Pushaw added in the Twitter thread blasting the mainstream media Sunday. She uploaded a screenshot of articles published by notable outlets, including ABC News, Forbes, and the Washington Post, that all picked up the Mississippi Health Department memo that the Associated Press report is based on.

The state's Health Department issued an alert on Aug. 20 to health care providers regarding the increase in poison control calls due to potential ivermectin toxicity.

State epidemiologist Dr. Paul Byers wrote in the memorandum that 85 percent of the callers had experienced mild symptoms, but only one individual was instructed to seek further evaluation due to the amount of ivermectin ingested.

"There are approved uses for ivermectin in both people and animals," Byers pivoted in the letter, but urged that patients should be advised to not take any medications intended to treat animals and should be instructed to only take ivermectin as prescribed by his or her physician.

The Aug. 25 correction issued two days after the initial report has re-surfaced on the heels of another establishment media failure that imploded over the weekend.

It follows an egregious journalism error in recent days on the subject of ivermectin and patients taking the common horse de-wormer to treat COVID-19. Big Media personalities and outlets alike treated the reporting as a ubiquitous phenomenon and justification to assail skeptical Americans, before the coverage was debunked.

Rolling Stone reported on Sept. 3 that emergency rooms in Oklahoma are overwhelmed by patients suffering from the livestock version of ivermectin overdoses, forcing gunshot victims to wait for proper care. But the Rolling Stone has also issued an update after questions soon arose in regards to the credibility of the doctor who was quoted on the conditions of the emergency rooms.

The national report by the Rolling Stone originated with local Oklahoma news outlet KFOR and was shared by MSNBC's Rachel Maddow as well as self-proclaimed Harvard epidemiologist Eric Feigl-Ding. The local story went international and was regurgitated by the BBC, Business Insider, The Independent, and The Guardian, as well as other major news sources.

KFOR interviewed Dr. Jason McElyea whose account was contradicted by a statement from one of the area hospitals that the doctor is listed as being affiliated with. Northeastern Health System Sequoyah stated on its website that McElyea is not an employee of NHS Sequoyah but he is affiliated with a medical staffing group that sometimes provides coverage for its emergency room. However, he has not worked at the Sallisaw location in more than two months, NHS Sequoyah emphasized, stressing that it has not witnessed any cases of ivermectin ingestion.

"All patients who have visited our emergency room have received medical attention as appropriate. Our hospital has not had to turn away any patients seeking emergency care," NHS Sequoyah rebutted the doctor's claims.

The Rolling Stone has since updated its report by appending NHS Sequoyah's statement to the top of the article, but there has yet to be a formal correction or a retraction of the false claim. The promotional photo used by the Rolling Stone on social media to depict the overflow of emergency room patients was also exposed as propaganda fuel. The false depiction is an image from January at a church in Oklahoma City, picturing residents waiting to receive the COVID-19 vaccine.

Local news outlet KXMX reported on Sept. 4 that ivermectin overdoses are not an issue at the Sallisaw emergency room or hospital.

Hospital administrator Stephanie Six said on Saturday that "this is simply not the case in Sallisaw," the Oklahoma-based radio station wrote.

"We at NHS-Sequoyah have not seen or had any patients in our ER or hospital with ivermectin overdose," Six told KXMX. "We have not had any patients with complaints or issues related to ivermectin." Six said, however, that she can't speak for what McElyea has witnessed at other facilities.

The Rolling Stone further responded to the media-wide backlash and NHS-Sequoyah's refutation with an overhaul of the story's headline Saturday night.

"One hospital is denying an Oklahoma doctor's claim that ERs are delaying care for gunshot victims due to overdoses of ivermectin, a drug being falsely peddled as a covid treatment," the Rolling Stone tweeted, amending its first report.

After relying upon McElyea's narration of medical backlogs in rural Oklahoma due to ivermectin overdoses that he alleged left both beds and ambulance services scarce, the Rolling Stone admitted in the revised report that it "has been unable to independently verify any such cases as of the time of this update."

However, the Rolling Stone still pushed back on the criticism, citing that, per the National Poison Data System, there were 459 reported cases of ivermectin overdose in the country in August. "Oklahoma-specific ivermectin overdose figures are not available, but the count is unlikely to be a significant factor in hospital bed availability in a state that, per the CDC, currently has a 7-day average of 1,528 Covid-19 hospitalizations," the Rolling Stone grasped at straws.

Another report from KFOR from Aug. 25 showed that there were just 11 exposures to ivermectin in the entire state of Oklahoma since the beginning of May. KFOR spoke to Scott Schaeffer, managing director of the Oklahoma Center for Poison and Drug Information, who said that most patients developed minor symptoms such as nausea, vomiting, diarrhea, and dizziness, though there's the potential for more serious side effects including low blood pressure and seizures with an overdose, as well as interactions with medications such as blood thinners.