Democrat Councilwoman Tiffany Caban has not only called for defunding the police but the erasure of policing altogether and the elimination of prisons. 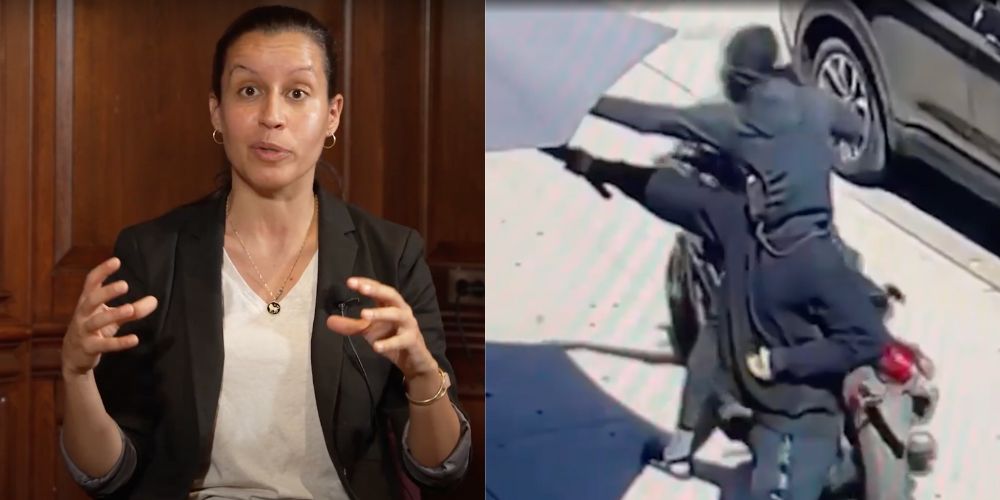 Masked gunmen on Tuesday robbed a Queens, New York coffee shop that sits across the street from the office of Democrat Councilwoman Tiffany Caban. Caban's official position is not only the defunding of the police but the entire elimination of the New York City police force, shutting down all prisons, and releasing the incarcerated onto the streets.

The New York Post reports that two "brazen thieves" draped head to toe in black, including ski masks, drove their motorcycles onto the sidewalk on 31st Street in Astoria where customers were enjoying the sunny day at the hip Under Pressure Espresso Bar.

The bandits pointed their weapons at the patrons and under pressure of gunfire made them turn over bracelets, chains, and smaller items to the crooks. The incident happened around 3 pm and the cycle robbers fled north on 31st St. No one was injured and the suspects are still at large.

An anonymous worker told the Post, "Two people came on motorcycles and they pointed their gun outside and took some chains and bracelets from some people outside." Other employees and witnesses said the robbers ordered "hands up, don't move" and if people move they would be shot.

According to her official councilwoman website, Caban says that as a public defender she protected "vulnerable communities" from "brutal system of mass incarceration."

At her CabanforQueens website, the councilwoman clearly states that she intends to facilitate "defunding the NYPD and eliminating the roles that the NYPD and incarceration play in New York City’s public safety." She articulates her "new vision" for public safety where criminals roam NYC free of police and instead incidents of crime are handled by social workers.

According to the Post, Caban criticized the NYPD in a letter she sent in February for sending an anti-gun unit to the 114th precinct which encompasses the area of the Under Pressure crime.

Caban wrote, "Our district is already home to some of the highest stop-and-frisk rates in the city. Now we will also have to contend with the unit that, despite containing roughly 5 percent of the force, committed nearly 1/3 of all police murders in the 20 years before it was [previously] disbanded." An Under Pressure employee called Caban a "clown" for her anti-police sentiment.

In response to questions over the incident a spokesperson said she was "in a meeting."

Caban is a member of many caucuses including the "Lesbian, Gay, Bi-sexual, Transgender, Queer, Intersex, Asexual Caucus" and the "Black, Latino and Asian Caucus."