Despite taking action into his own hands to help the elderly woman from being further attacked, left-wing journalists and activists targeted Masters, painting him as the villain. 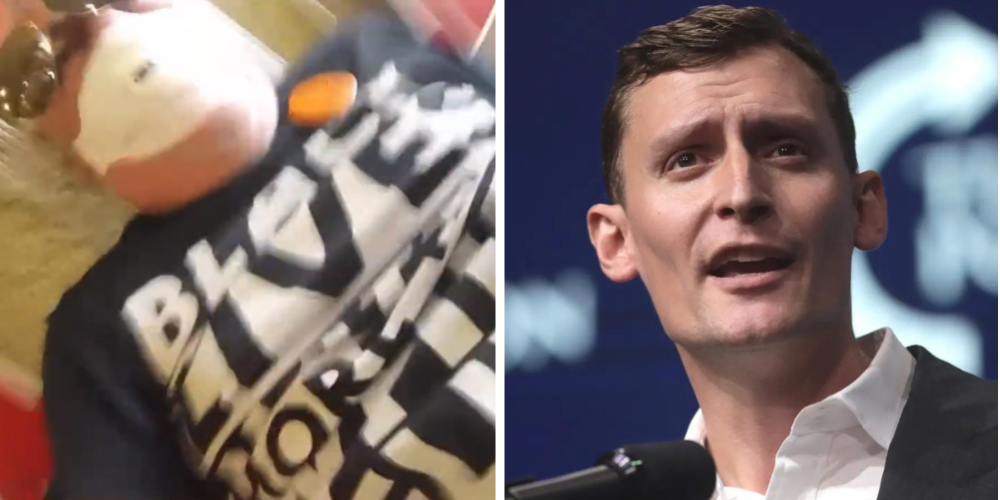 Blake Masters, an Arizona Republican candidate for the US Senate, defended  an elderly woman who was assaulted by a Democratic activist at a GOP candidate mixer on Saturday night in Green Valley, Arizona.

Despite taking action into his own hands to help the elderly woman from being further attacked, left-wing journalists and activists targeted Masters, painting him as the villain.

"Here's the video of Blake Masters pushing a 73-year-old man to the ground during a GOP event in Arizona. The man was wearing a BLM shirt, fully vaxxed sticker, and an N95 mask," an individual posted to Twitter  on Wednesday.

Masters defended his actions and said that he was acting in self-defense.

"This guy hit a woman in the jaw. I saw it, clear as day. He should not have done that!" Masters said on Twitter Wednesday.

The video showed an elderly man dressed in a Black Lives Matter shirt, wearing a N95 mask and fully-vaxxed sticker, confront an elderly woman who was recording the man as he encroached on the group, while also recording.

"Put down your phone," another elderly woman said to the man, before he assaulted the female recording.

The video showed the elderly woman reaching out her arm in what looks to be an attempt to block his camera. In return, the elderly man allegedly struck her in the jaw which resulted in escalation.

Masters, who happened to be nearby, defended the elderly woman from the aggressor, which resulted in the elderly man falling to the ground, as Masters tried to remove him from the venue.

According to journalist Benny Johnson, the man in the BLM shirt is a leftist named Peter Jackson who had previously been convicted by a federal court of sexual assault against his own daughter.

Despite the revelation, Democratic activists and journalists attempted to spin the situation and wrote headlines such as, "Masters Accosts Democrat Wearing BLM Shirt at Campaign Mixer."