The language in the new proposal also includes a patient's subjective "gender identity" as a trait that may not be discriminated against. 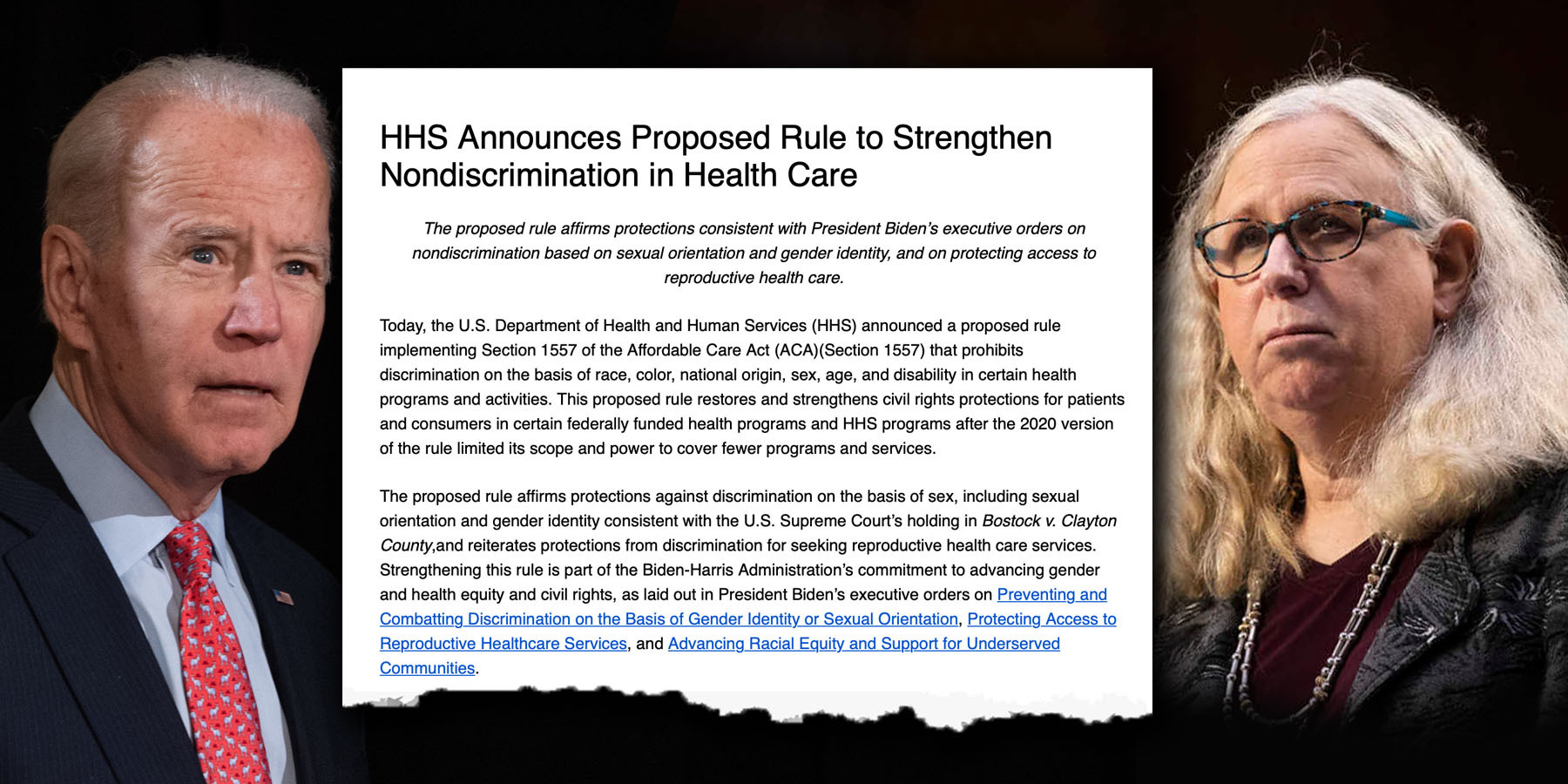 The Biden administration on Monday afternoon announced a new plan to modify the Affordable Care Act to remove safeguarding measures that currently prevent children from having easy access to sex change treatments, or as Biden calls it, "gender-affirmation" care.

These treatments include puberty blockers, cross-sex hormones and surgeries that make one’s body appear more like the opposite sex. The proposal applies to Obamacare health plans, Medicaid, and Medicare.

The proposed rule issued by the Department of Health and Human Services, headed by Xavier Becerra and Assistant HHS Secretary Dr. Rachel Levine, a biological male who identifies as transgender and backs gender transition for kids, also seeks to allow women to receive abortions by reinterpreting "discrimination on the basis of sex" to include access to "pregnancy termination" as something that would be discriminatory were it not permitted.

The language would allow people to file claims with the Health and Human Services Office of Civil Rights if they believed they had faced "discrimination" from a health-care provider based on their sexual orientation, gender identity or pregnancy.

Healthcare organizations that receive federal funding would also be prevented from "discriminating" against "gender transitions," and would be required to grant adults and children access to drugs, hormones and surgeries facilitating their sex changes. To not do so, under the new rule, would be discriminatory.

The language in the new proposal also includes a patient's subjective "gender identity" as a trait that may not be discriminated against.

This has caused some clinicians to worry that it would prevent them from being able to pursue other types of therapy that are not "gender-affirming," such as exploratory forms of therapy that may be able to address and resolve the underlying causes of a patient’s gender dysphoria.

"Today's proposed rulemaking through the Affordable Care Act is a big moment for equal protection under the law. It prohibits discrimination on the basis of race, color, national origin, sex, age, and disability in certain health programs and activities," wrote White House Assistant Health Secretary Rachel Levine on Twitter.

Genspect, an international advocacy that strives for an evidence-based approach to gender distress wrote to administration officials in April, "All we are trying to do is advocate for caution, and compassion informed by evidence and not ideology."

While the US under the Biden Administration is moving full steam ahead to allow children unmitigated access to medical transition, several European countries like Sweden and Finland have changed course to a more cautious approach.

Sweden’s National Board of Health and Welfare (NBHW) released new guidelines for treating young people with gender dysphoria. "The NBHW deems that the risks of puberty suppressing treatment with GnRH-analogues and gender-affirming hormonal treatment currently outweigh the possible benefits, and that the treatments should be offered only in exceptional cases."

Finland’s Council for Choices in Health Care (COHERE) came to almost the exact same conclusion a year earlier, saying that: "The first-line intervention for gender variance during childhood and adolescent years is psychosocial support and, as necessary, gender-explorative therapy and treatment for comorbid psychiatric disorders."

They further state that: "In light of available evidence, gender reassignment of minors is an experimental practice." Gender reassignment medical interventions "must be done with a great deal of caution, and no irreversible treatment should be initiated," COHERE wrote.

Britain’s National Health Service (NHS) also recently changed its stance on puberty blockers as being "fully reversible" to an admission that their long-term effects are unknown. The American Academy of Pediatrics is currently reviewing their policy on the use of puberty blockers for treating gender dysphoria.