"Did you defend them when they were being attacked for whipping people which they were not?" Lee pressed. 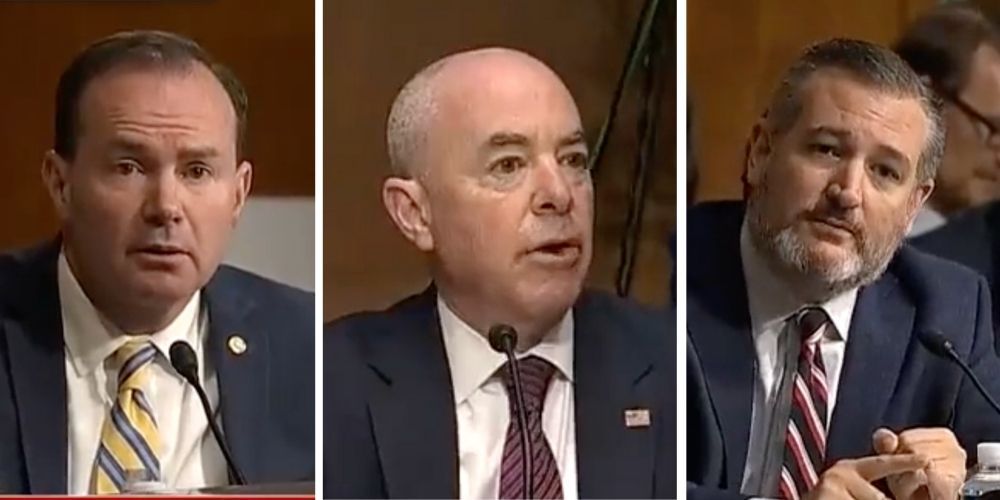 "What about the issue with your Border Patrol agents recently being accused by some folks in the media of whipping illegal immigrants, when in fact they were not? Why on earth did you not defend them? Maybe, is no one in your entire department ever become aware of how one uses split reins when riding a horse?" asked Lee.

"Well, Senator, let me let me say two things. Number one, I've put 100 percent into my work and I'm incredibly proud to do so. That's number one. Number two, I stand with the men and women of our department through and through, and I will not prejudge facts before—" Mayorkas began.

"Did you defend them when they were being attacked for whipping people which they were not?" Lee pressed.

"Senator, what I said quite clearly, is that the independent investigation will determine the facts and those facts will drive the outcome. Nothing less and nothing more," Mayorkas responded.

"Your response and your failure to defend them then, and now, is nothing short of morale crushing. If you want to maintain or obtain operational control of the border, which you do not now have, this is not a way to get there," said Lee.

Lee's questioning comes months after an independent investigation was launched after photos were published depicting Border Patrol agents at the southern border attempting to keep the Haitian migrants that were then flooding over the border out.

Media, and even President Joe Biden, accused the agents of using their split reins, which are used to steer the horses, as whips against the migrants.

The photographer that took the photos in question, Paul Ratje, said that he and his colleagues never witnessed that.

"I didn't ever see them whip anyone with the thing," Ratje said. "He was swinging it, but I didn't see him actually whip someone with it. Those definitely can be misconstrued when you're looking at the picture."

In a press conference, Biden accused the agents of "strapping" the migrants. "To see people treated like they did, horses barely running them over and people being strapped, it's outrageous," said Biden. "I promise you that those people will pay."

In the same hearing, Senator Ted Cruz grilled Mayorkas about whether or not the president or vice president has traveled to the southern border to see the "Biden cages."

"The President has not been down to—" responded Mayorkas, who was cut short.

"Okay, no. Has Kamala Harris been down to see the Biden cages—this facility? Yes or no," Cruz asked. "The Vice President was at the border—" Mayorkas said.

"The Vice President was at the border, has she been down to see this facility? I know she went to El Paso, Has she seen the Biden cages?" Cruz pressed.

"They are not cages," Mayorkas responded.

"What are these walls?" Cruz asked. "Has Kamala Harris seen them? Yes or no? It's a simple question. Yes or No, we don't need a paragraph. Has Kamala Harris been down to see these detention facilities?"

"She has not been down—" said Mayorkas.

"Has any Democratic senator on this committee been down to see the Biden cages?" Cruz asked. "I will once again disagree with your use of terminology," Mayorkas said in response to Cruz's use of the word "cages."

"These facilities, has any Democratic member of this committee given a damn enough to see the children being locked up by Joe Biden, Kamala Harris because of your failed immigration policies?" Cruz questioned.

Cruz's questioning comes months after brutal conditions were revealed in temporary border facilities at the southern border. The Biden administration and Democrats have been reluctant to go to the southern border, while Cruz himself has traveled there several times, exposing the real crises that have occurred there.