"I've been calling it 'bring back blackouts' because it's an attack on our energy independence. It's going to raise taxes on Americans who make under $400,000 a year," Greene said. 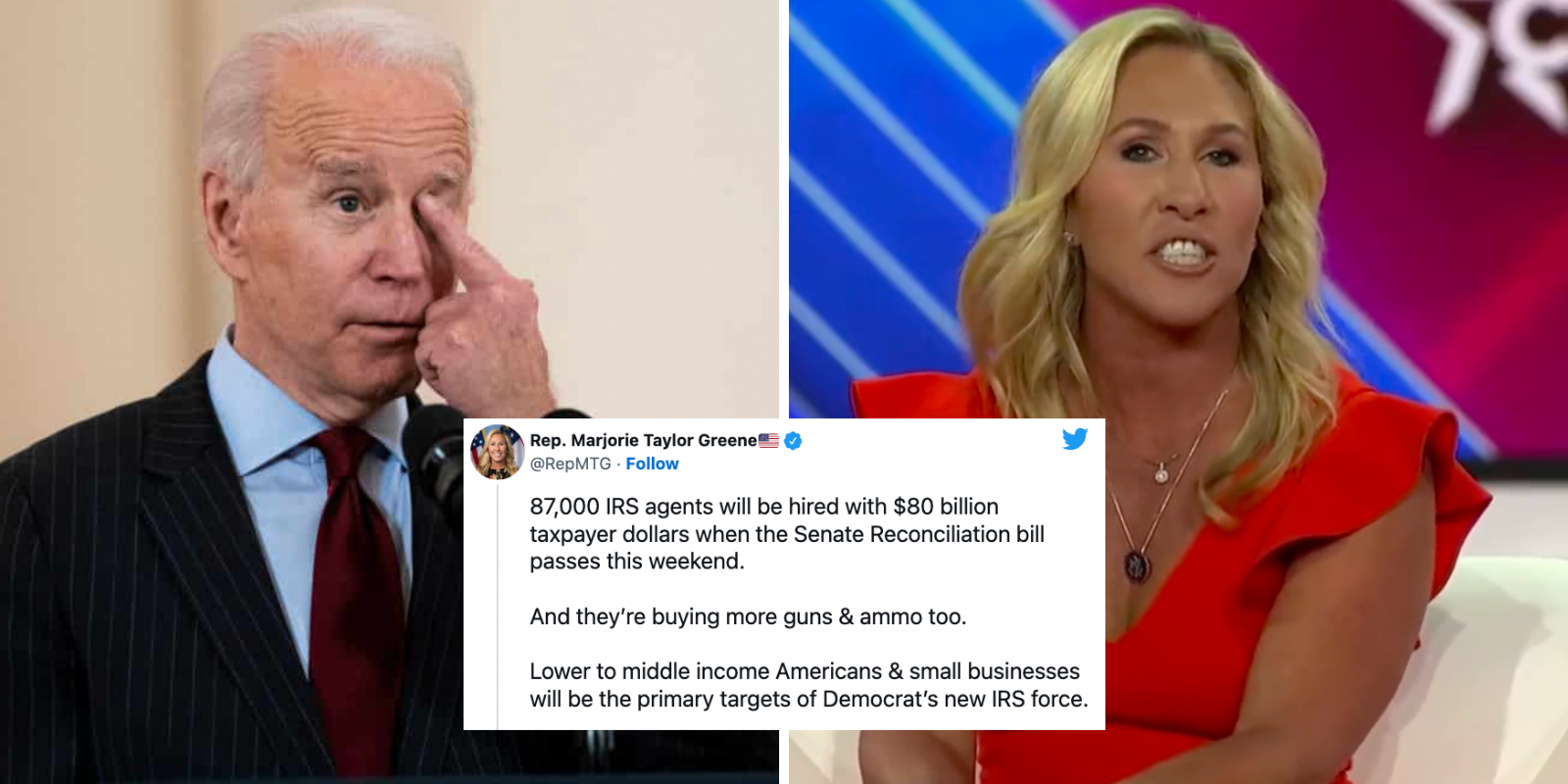 The poorly named Inflation Reduction Act, passed over the weekend by Senate Democrats, is slated to create positions for nearly 87,000 new IRS agents, 70,000 of whom will be armed.

This brings the total to nearly 170,000 under the bureau of tax collection. The cost of this new initiative will be about $80 billion, and it's all part of a bill meant to lower costs to Americans.

This was noted as well by Congresswoman Marjorie Taylor Greene, who told The Post Millennial that "The bill is terrible. It's basically Joe Biden Build Back Better agenda, that a lot of Republicans called 'build that broke."

The Joint Committee on Taxation has given an estimate of the plan, saying that "between 78% and 90% of the additional $200 billion that the IRS will collect as a result of its bolstered workforce will come from small businesses making less than $200,000 per year, according to the New York Post.

"The Democrats are making the IRS bigger than the Pentagon plus the Department of State plus the FBI plus the Border Patrol combined," Senator Ted Cruz said. "This is a massive power grab."

"I've been calling it 'bring back blackouts' because it's an attack on our energy independence. It's going to raise taxes on Americans who make under $400,000 a year," she said.

"This is the Biden administration. This is who they are. They claim to be helping people that not at all. They're America last and that's what their agenda is."

When asked why IRS agents need to be armed, Greene said  "There is a blurring of the IRS that that has sort of a law enforcement angle, which we do need that. But we don't need 70,000 new armed IRS agents. This is terrifying."

The $739 billion Inflation Reduction Act is touted by Democrats as a fix-all for climate change, prescription drug prices, healthcare equity, and imposing tax increases on high-earners, something Biden has routinely promised.

However, the bill, passed on Sunday with a tie-breaking vote from Vice President Kamala Harris, will give extensive tax breaks to families looking to make pricey purchases such as transforming their homes to run on solar or other renewable energy resources and buying electric vehicles. China controls much of the renewable energy industry.

After House Speaker Nancy Pelosi made a visit to Taiwan last week, China shut down talks with the US on a climate agenda and began increasing their fossil fuel capabilities. The Biden administration consistently has tried to cut back the fossil fuel industry in the US to replace it with resources that may be unable to handle the weight of Americans' energy needs.

It raises taxes on all Americans except those earning between $10,000 and $30,000 annually, and it has provisions, through the IRS, to audit more middle-class Americans and to go after those with delinquent tax bills. Biden has consistently promised that Americans making less than $400,000 would see no new tax increases.

Correction: It was later reported that these new IRS positions would be phased in through 2031, and some new hires would replace outgoing, retiring IRS employees.