BREAKING: Biden says getting vaccinated against COVID-19 is 'your patriotic duty' 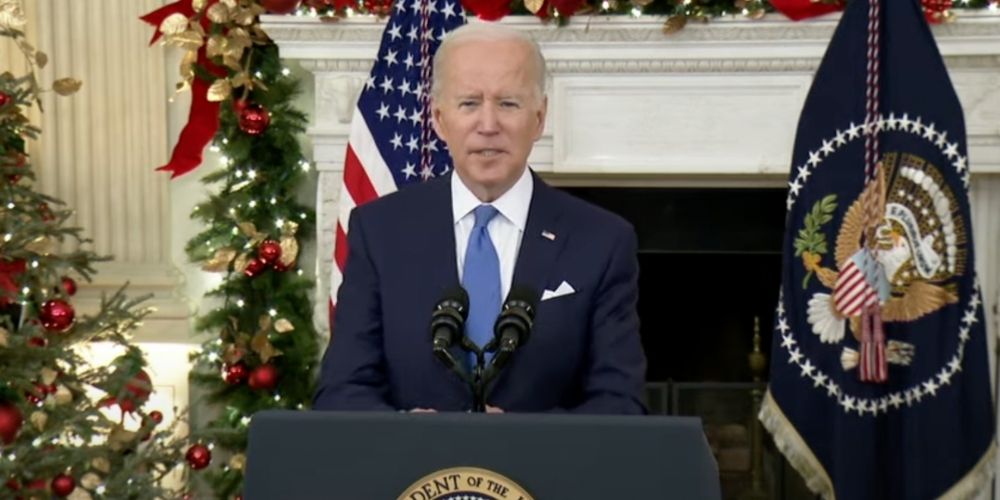 On Tuesday, President Joe Biden announced how he would expand upon his early December plans to battle COVID-19 through the winter.

The plan reiterated many of those expressed in his December speech, with a stress on getting more Americans vaccinated and supporting hospitals amidst the surge in cases of the Omicron variant.

"All these people who have not been vaccinated: you have an obligation to yourselves, to your families, and quite frankly ... and I know I'll get criticized for this—to your country," said Biden.

"Get vaccinated. It's free. It's convenient. I promise you, it saves lives," he stressed.

Biden also blamed cable TV and social media for people who don't want to get vaccinated against the coronavirus.

"Thanks to my administration and the hard work of Americans, we led a rollout made America among the world leaders in getting shots and arms. But uptake slowed this summer as vaccine resistance among some hardened," said Biden.

"Look, the unvaccinated are responsible for their own choices. Those choices have been fueled by dangerous misinformation on cable TV and social media. You know, these companies and personalities are making money by peddling lies and allowing misinformation that can kill their own customers and their own supporters. It's wrong. It's immoral. I call on the purveyors of these lies and misinformation to stop it. Stop it now," he added.

Biden told Americans that they should be "concerned about Omicron, not panicked."

But for those that are unvaccinated, he stressed that the concern should be higher.

"If you're not fully vaccinated, you have good reason to be concerned. You at a high risk of getting sick. And if you get sick, you're likely to spread it to others including friends and family, " said Biden, noting that unvaccinated people have a higher risk of ending up in the hospital or dying compared to those that have been vaccinated.

Biden continued on to say that if you have gotten vaccinated, especially if you have received the booster as well, you have little reason to worry.

In addition to stressing the importance of getting vaccinated, Biden announced additional support for hospitals, increased access to free testing, and expanded vaccination sites.

Overburdened hospitals will receive service members to bolster their staff numbers, as part of the 1,000 troops deployed by the White House to do so. FEMA response teams will also be activated to provide additional staffing and capacity.

Biden also announced that new federal testing sites would be set up across the country to improve access to the service.

The Biden administration will also be purchasing 500 million rapid, at-home tests to be distributed to Americans for free this winter.