"People are not going anywhere, because they're worried they're going to get sick, and I've tried everything in my power to get people vaccinated," Biden said. 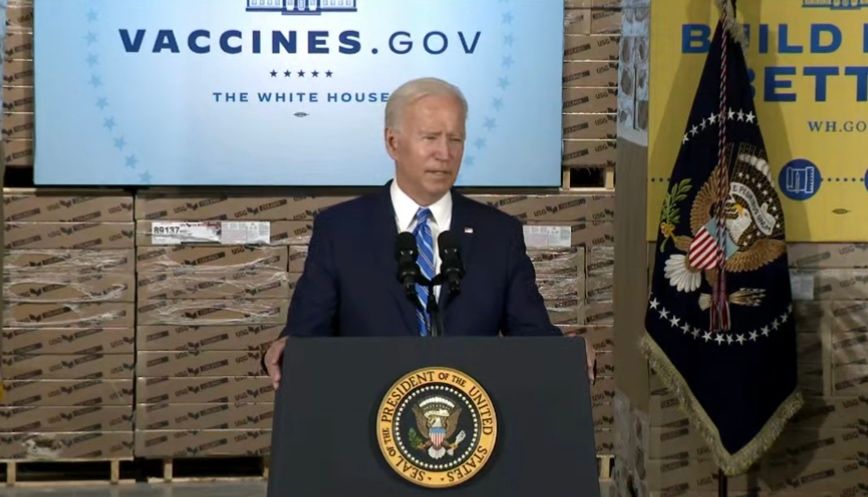 President Joe Biden spoke in Chicago to Clayco employees on Thursday to pump his administration's vaccine mandates. All those who spoke prior to Biden taking the podium kept on their masks, though they are fully vaccinated. While wearing those masks, they spoke to the efficacy not of vaccines, but of vaccine mandates, saying that the mandates have been super effective because they have led to more Americans getting a COVID-19 vaccine.

It was after the Chicago contingent left the podium that Biden approached the mic. Biden spoke about how nice it was that everyone at Clayco got vaccinated.

Biden rambled about his allegiance to labor, and their support of him, before launching into his laundry list of COVID policies, and saying that the evidence that vaccine mandates work is that more people have been vaccinated because of the threats to their jobs and ability to participate in public life.

Biden noted the issues with those who have not been vaccinated. Not only, he said, do they put the entire health care system at risk, but the economy, as well.

"The unvaccinated also put our economy at risk, because people are reluctant to go out, and think about this, even in places where there is no restriction, and going to restaurants and gyms and movie theaters. People are not going anywhere, because they're worried they're going to get sick, and I've tried everything in my power to get people vaccinated," he said.

Biden also said that "vaccination requirements are good for the economy, not only increase in vaccination rates, but to help send people back to work. Back to work." Biden has implemented a ruling from the Oval Office to require all businesses with over 100 employees to mandate that their workers be vaccinated as a condition of employment. The administration believes that this is part of their authority as controlling workplace safety.

The President was pleased to announce that Fox News, which has offered people the opportunity to speak their minds against vaccine mandates, is also subject to the administration's ruling that all large companies require vaccination.

"Increased vaccination coverage results in as many as 5 million American workers going back to work, because they feel safe they go back to work. There'll be more economic demand to drive people back to the workforce, but don't take it from me, not from some liberal think tank has to come through. But here's what Wall Street saying, Goldman Sachs quote vaccination will have a positive impact on employment, it means less rate of COVID-19 which will help people return to work. Moody's and Wall Street vaccination means fewer infections hospitalizations and deaths, in turn, it means a stronger economy," Biden said.

"One economists called vaccine requirements, quote, the single most powerful, the most powerful economic stimulus, ever enacted. The third point I'd like to make: report shows the vaccination requirements have broad public support. Yes, some object, and some object very strenuously, and some are making a political statement of this issue. But a strong bipartisan majority of Americans support vaccinations. They know it isn't about politics. It's about life and death. That's what it's about. It's about looking out for one another. It's about being patriotic, doing the right thing," Biden said.

He went on to say that he's calling on "more employers to act. My message is to require your employees to get vaccinated. With vaccinations, we're going to beat this pandemic finally. Without them, we face endless months of chaos in our hospitals, damage to our economy and anxiety in our schools, and empty restaurants."

"Look," he said, "I know that vaccination requirements are tough medicine. Unpopular with some, politics for others, and life-saving, game-changing for our country. We're in a position to leap forward in a way that we haven't for a long, long time economically. Businesses have more power than ever before to change the arc of this pandemic and save lives and protect and grow our economy. So as President, I'm going to continue to do everything I can to get us out of this pandemic. I look forward to more businesses joining that effort."

Biden's efforts to get Americans vaccinated have resulted in the implementation of vaccine mandates in cities and by employers. Some states, such as New York, have begun firing those workers, specifically health care workers, who have refused to be vaccinated. Many people who have refused the vaccination have done so sitting that they have had COVID, and that with the natural immunity they have been afforded as a result of that infection, they are not in need of mRNA vaccination.

The President took no questions.