It was organized by a group of parents who think the pushing of far-left ideology on their kids is going too far. 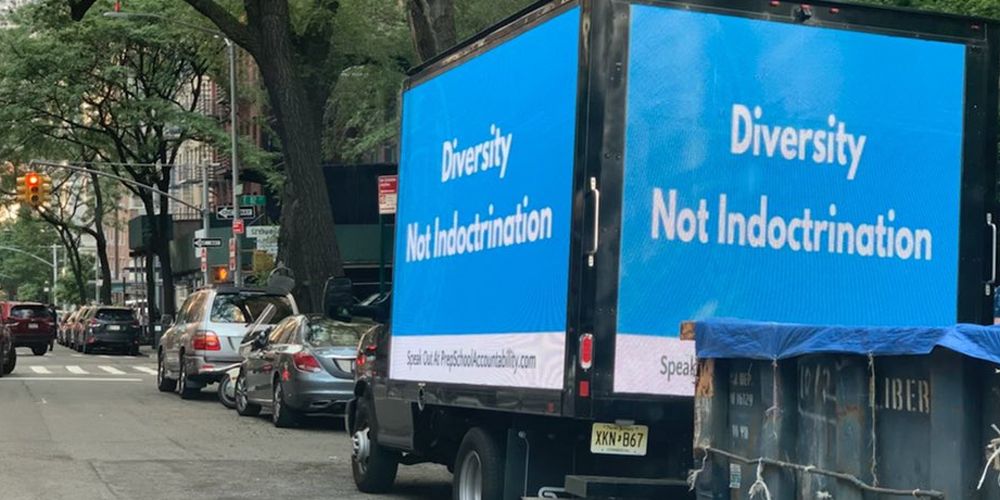 This week the woke indoctrination war continues heating up.

As reported via the New York Post, a group called Prep School Accountability spent $10,000 to station mobile billboard trucks outside six different elite private schools in the Manhattan area. Those included were the Brearley School, Trinity School, the Dalton School, and Spence School.

"DIVERSITY NOT INDOCTRINATION" says one message. "TEACH HOW TO THINK NOT WHAT TO THINK" read another.

To see what the group is about, check out the website listed on their advertisement trucks (or follow them on Twitter): "We are a group of concerned parents who believe there is a better way to promote diversity and inclusivity at leading independent schools in NYC without sacrificing quality education for all students. In recent years, a new orthodoxy has emerged at our schools, dividing our communities based on immutable characteristics such as race, ethnicity, gender, and sexual orientation. As a result, the core tenets of high-quality education—uniting all children and families through a love and appreciation for learning and community spirit—have gone by the wayside. Schools should unite us, not divide us.  To save our schools, administrators must ensure academic rigor and intellectual integrity are requirements of any core curriculum while respecting parents as the primary moral educators of their children. We hope to contribute to a necessary and ongoing dialogue surrounding diversity education to achieve diversity, inclusion, and quality education for all students."

Dan Ladner is the parent to a 6-year-old daughter who attends Horace Mann preparatory school in the Bronx, and he told the New York Post this shift to far-left ideology has gone too far: "I think it just comes down to basic common sense. If the woke thing is alienating people and making people uncomfortable it’s wrong but if it’s getting everyone to come together to think it's good."

Not all parents agreed though. Another said that critical race theory is the definition of diversity that people ought to be striving for in terms of the US education system. But the situation is increasingly polarizing to parents. Back in late April of this year, a father with a daughter in attendance at Brearley publicly blasted the school's turn to teaching wokeism to its students.

Expect to see more of this.