"Save Women’s Skateboarding. This past weekend in Canada. Photo speaks for itself." 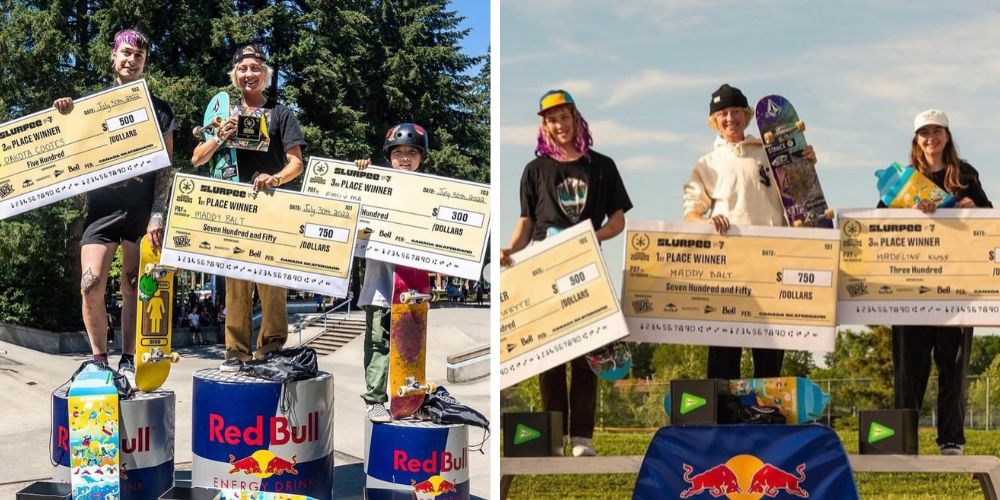 The Canada Skateboard Open, sponsored by Slurpee, has seen a number of biological males compete against and beat biological women at stops across the country.

Back in June, transgender skateboarder Violet Whyte came in second in the Edmonton stop of the tour, beating out Madeline Kuss for the second place prize money of $500.

Coming in first was Canadian skateboarding Olympic qualifier Maddy Balt, who scored a staggering 82.27 on her best run, 20 points over Whyte.

Bringing light to these recent biological male victories over females was fellow skateboarder Taylor Silverman, who posted photos of each of the podium victories to her Instagram.

Silverman, who spoke up earlier this year in regards to being beaten by a biological male, wrote in a pair of Instagram posts, "Save Women’s Skateboarding. This past weekend in Canada. Photo speaks for itself."

In response to outcry over Whyte’s win in Edmonton, Whyte published a post to Instagram slamming those that do not validate a transgender person’s identity.

"I just want to take a moment to say something to all trans/queer people out there; your existence is valid. Do not minimize yourself for anybody else," wrote Whyte, which accompanied a photo of the skateboarder doing a trick.

"That includes family, partners, employers and especially TERFs. Keep showing up and taking up space. That is the only way to create a safe space for us to exist."

"People will try to slander your name or devalidate your existence, yet here you are... a living, breathing person. You exist, and that is something many people will try to contest in your lifetime. You don't owe those people a damn thing. Not a response, not your anger and definitely not your time. You are capable of so much and your presence will inspire so many people to give themselves the permission to be their authentic selves simply because you exist. Trans people have always, and will always exist. Be yourself and show up with love for yourself and those around you," wrote Whyte.