JK Rowling, who has herself always been on the liberal left, also rather astutely pointed out the spectacular "own goal" of so many on the left currently saying "if you care about child safeguarding you must be right wing." 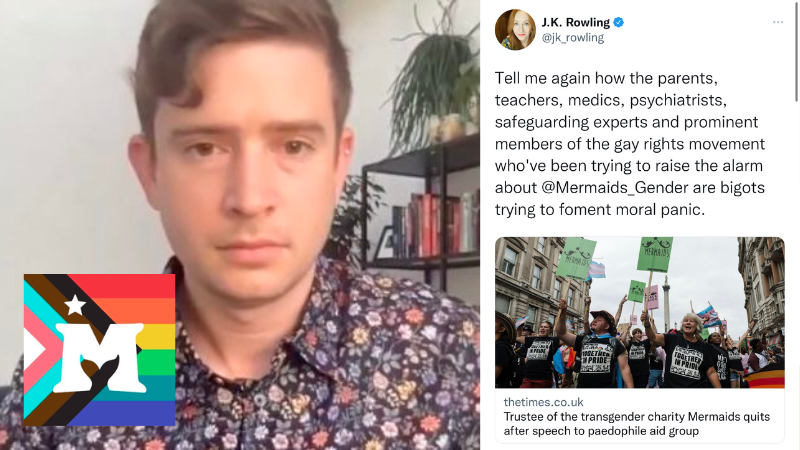 Mia Ashton Montreal QC
Oct 8, 2022 minute read
ADVERTISEMENT
ADVERTISEMENT
Things have gone from bad to worse for UK trans charity Mermaids after it was revealed that one of the members of their board of trustees gave a speech at a conference held by a group which advocates for pedophile acceptance, indicating that he is a supporter of said group. That trustee has since resigned.

Dr. Jacob Breslow was a graduate student in gender research at the London School of Economics at the time of the presentation, which was given in 2011 at an event hosted by the group B4U-ACT, reported The Times. This only came to light as part of discovery during a hearing Mermaid brought against the LGB Alliance, during which they had to provide a list of their board members.

JK Rowling, who has herself always been on the liberal left, also rather astutely pointed out the spectacular "own goal" of so many on the left currently saying "if you care about child safeguarding you must be right wing."

After this information came to light, Breslow immediately resigned his position as trustee of the children’s charity, which advocates for gender-confused children to have their puberty blocked by off-label experimental drugs ironically once also used to chemically castrate sex offenders.

This revelation couldn’t have come at a worse time for the charity which is now facing an investigation by The Charity Commission after it was revealed by The Telegraph that the group was sending dangerous chest compression devices in discreet packages to teenage girls who believe themselves to be boys.

Mermaids workers were also found to be giving medically inaccurate advice to children about puberty blockers being safe and "totally reversible" and a Mermaids moderator had congratulated a 13-year-old for deciding they are transgender and announcing that declaring to want drugs and "all the surgeries."

JK Rowling was one of many high profile people to say that all celebrities who have blindly supported this charity over the years ought to feel ashamed to have done so. Alexandria Ocasio-Cortez, Harry Potter star Emma Watson, and The Duke and Duchess of Sussex are amongst those who have publicly supported the now-disgraced charity.

The charity seems to be self-destructing, as the revelations about their pedophile-apologist trustee only appear to have come to light after their legal proceedings against LGB Alliance were launched, in which they are trying to strip the gay rights group of its charitable status, alleging that the real purpose of the group set up by lesbians to protect the rights of gay, lesbian and bisexual people is "the denigration of trans people and the destruction of organizations that support them, in particular through political lobbying."

"I note the genderists are now arguing that it doesn't matter that a paedophilia apologist was a trustee of a trans children's charity, because he was 'only one'," she tweeted. "You know, I thought things were pretty bad when you were arguing to put convicted rapists in women's jails, when you shrugged off masked men roughing up lesbian protestors and tried to shout down detransitioners talking about what was done to them by ideologically-captured doctors."

"Women, gay people and vulnerable kids have suffered real harm and you? You cheered it all on. You still prefer wilful blindness and four word mantras to considering you might have got this badly wrong. You became part of an authoritarian, misogynist, homophobic movement and you didn't even notice. Enjoy the sense of your own righteousness while you can. It won't last."

Members of pedophile advocacy group Prostasia wrote comments on the site suggesting that they stick up for Breslow.
ADVERTISEMENT
ADVERTISEMENT
mermaids pedo