Dr. Oren Ganor, co-director of Boston Children’s Center for Gender Surgery, said in an email to WBUR that he is "slightly flexible" when it comes to the age of males seeking genital surgery. 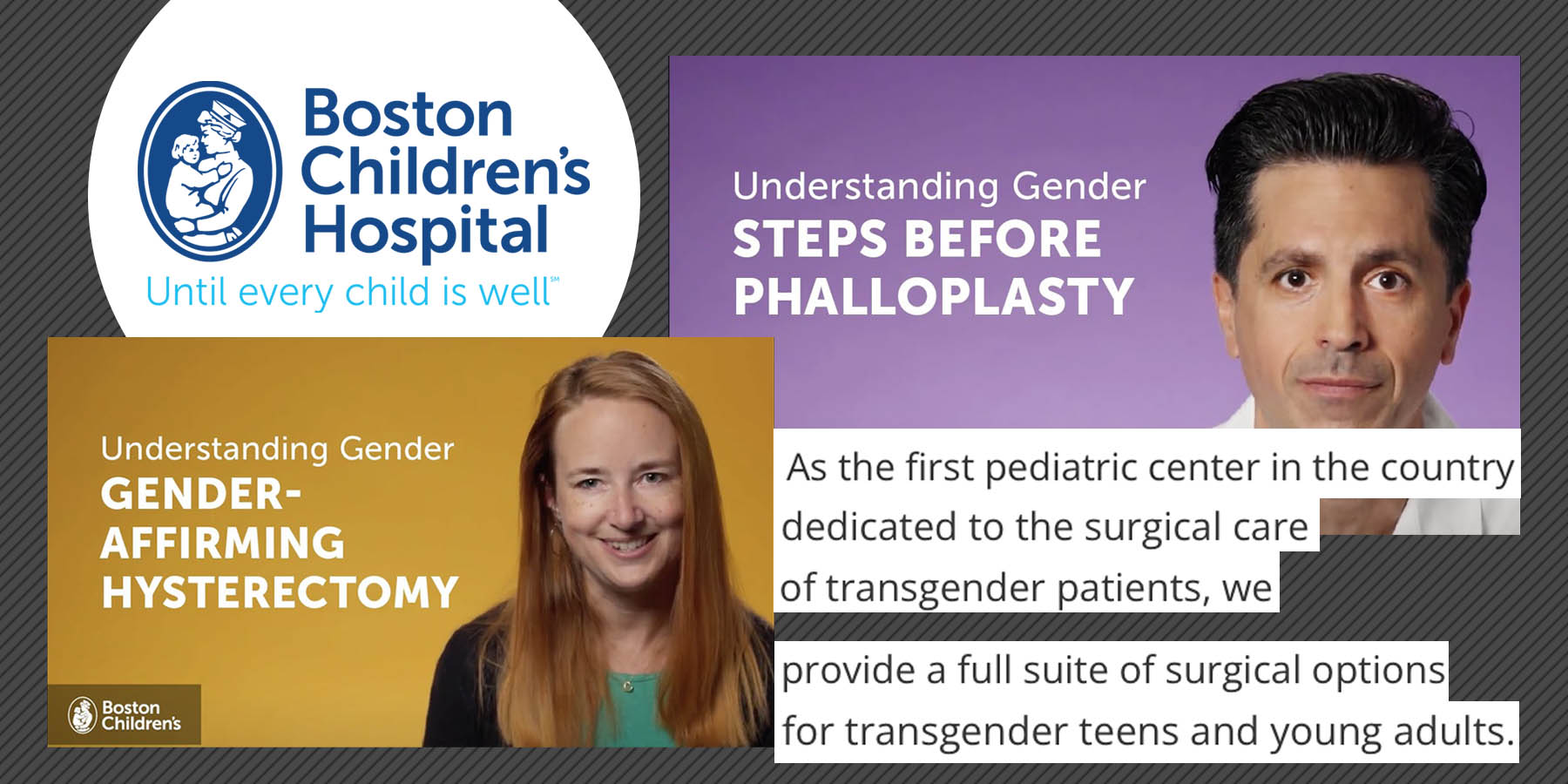 Boston Children’s Hospital boasts about having the first pediatric transgender surgery center in the country offering a "full suite of surgical options for transgender teens."

Boston Children’s Hospital promotes their surgeries through a video series on their official YouTube channel, with titles like "What You Need To Know Before Phalloplasty Surgery." The 90 videos in the series paint a rosy picture of the genital, chest and face surgeries they offer, accompanied by upbeat background music.

Chris Elston, otherwise known as "Billboard Chris," shared a tweet on Tuesday of a video in the Children’s Hospital playlist called "What happens during a gender-affirming hysterectomy?"

In that video, Dr. Frances Grimstad describes the process of getting a "gender affirming hysterectomy."

A bulletin on the Children’s Hospital Gender Multispecialty Service (GeMS) homepage reads, "At Boston Children’s, we are proud to be home to the first pediatric and adolescent transgender health program in the United States" that has treated "more than 1,000 families to date."

Boston Children’s Hospital founded the Gender Multispecialty Service (GeMs) program in 2007 and welcomes patients as young as 3 years old. "At GeMS, our mission is to assess and care for gender-diverse children, teens, and young adults."

GeMS provides "a variety of options for medical transition" that include prescribing puberty blockers, testosterone, estrogen and plastic surgery from their surgery center. "Our skilled team includes specialists in plastic surgery, urology, endocrinology, nursing, gender management, and social work, who collaborate to provide a full suite of surgical options for transgender teens and young adults," the website reads.

But "gender affirmation" care is rooted in gender ideology, which is a belief system based on the falsehood that whether someone is a man, boy, woman, or girl has nothing to do with one’s biology, but instead is determined by one’s subjective and undefinable "gender identity." Therefore, males can be women and girls, and females can be boys and men. Gender ideology also claims that a felt mismatch between one’s body and gender identity can be corrected by puberty blockers, cross-sex hormones, and surgeries, what the Boston Children's Hospital aims to offer.

For children 9 and under, the hospital helps facilitate a social transition that prepares them for individualized treatment plans that can include puberty blockers, cross-sex hormones, and chest surgeries. Chest surgeries are available at age 15.

Boston Children’s Hospital relies on the The World Professional Association for Transgender Health (WPATH) Standards of Care model. Genital surgeries require several letters of support from the patient’s healthcare providers and must have lived as their "identified gender" for only 12 months. For phalloplasty (creation of a pseudopenis from skin taken elsewhere on the body) and metoidioplasty (creation of a pseudopenis from existing genital tissues), they ask that you be at least 18 years old, per WPATH guidelines.

Patients only 17 years old can obtain a vaginoplasty, but Dr. Oren Ganor, co-director of Boston Children’s Center for Gender Surgery, hinted in an email that children even younger can be operated on. Ganor said in an email to WBUR that he is "slightly flexible" when it comes to the age of males seeking genital surgery. Ganor adds that the policy has not been finalized "because of the issue around consent for sterilization (which is part of the procedure).”

Dr. Jaromir Slama, a plastic surgeon at Boston Medical Center, describes the vaginoplasty procedure: "It involves orchiectomy, removing the testicles, and we use the skin tube of the penis and some of the skin of the perineum to pretty much turn it outside in and that becomes the new vagina."

All of these "gender affirming" surgeries are covered through commercial insurers and the state's Medicaid program in Massachusetts. Taxpayer funded state Medicaid’s policy explicitly covers transition-related health care, who have determined in their guidelines that gender-related surgeries "may be medically necessary."

The cost for phalloplasty, which ranges from $20,000 to $40,000, is covered for most patients in Massachusetts, per an order from the state that prohibits insurance companies from discriminating based on "gender identity."

The Center for Gender surgery also provides sample letters to help patients guarantee their acceptance into their program.

But Safer cites a conceptually flawed study which he claims is proof that "gender identity is rooted in biology" that changed his mind. "Which makes it so logical that an option for people in 2016 is to change the external appearance to meet that gender identity," he said.

The WPATH lists surgical complications of genital surgeries in their Standards of Care guidelines. Vaginoplasties may incur "complete or partial necrosis of the vagina and labia, fistulas from the bladder or bowel into the vagina, stenosis of the urethra, and vaginas that are either too short or too small for coitus."

WPATH warns that patients who obtain phalloplasty may suffer "frequent urinary tract stenoses and fistulas, and occasionally necrosis of the neophallus. Metoidioplasty results in a micropenis, without the capacity for standing urination. Phalloplasty, using a pedicled or a free vascularized flap, is a lengthy, multi-stage procedure with significant morbidity that includes frequent urinary complications and unavoidable donor site scarring,"

Amir Taghinia, a plastic surgeon who is a member of Boston Children's transgender surgery team, says that 30 to 50 percent of phalloplasty patients seek treatment for a blocked or leaking urethra.