Matt Taibbi shared the ask from Schiff's office sent to Twitter, which said that Schiff's office claimed that there had been "harassment from QAnon conspiracists" against a Schiff staffer. 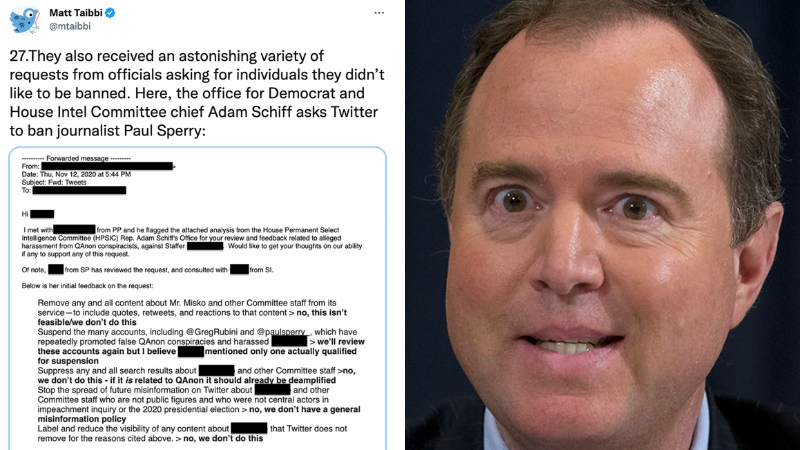 In November 2020, California Congressman Adam Schiff reached out to Twitter to ask them to specifically ban journalist Paul Sperry. Schiff alleged that Sperry, who is an investigative reporter for Real Clear Investigations, had "repeatedly promoted false QAnon conspiracies and harassed [name redacted.]"

"Remove any and all content about Mr. Misko," Rep. Sean Misko of the House Permanent Select Committee on Intelligence, "and other Committee staff from its service—to include quotes, retweets, and reactions to that content."

"Suspend the many accounts, including [Greg Rubini] and [Paul Sperry], which have repeatedly promoted false QAnon conspiracies and harassed [redacted.]"

Rubini was later permanently suspended from Twitter for tweeting "that Dr. Anthony Fauci created the coronavirus, and that it's being used as a bioweapon to reduce the world's population." He had been reported to be in violation of Twitter's policies, as well.

Schiff's request continued, asking Twitter to "Suppress any and all search results about [redacted] and other Committee staff."

"Stop the spread of future misinformation on Twitter about [redacted] and other Committee staff who are not public figures and who were not central actors in impeachment inquiry or the 2020 presidential election."

"Label and reduce visibility of any content about [redacted] that Twitter does not remove for the reasons cited above."

In response to this ask, and to their credit, Twitter said to the first ask, "no, this isn't feasible/we don't do this." As to the ask for suspensions, Twitter said they would "review these accounts again," but that "only one actually qualified for suspension." That may have been Rubini, though Sperry was later suspended.

Schiff has repeatedly stoked fears of QAnon conspiracies to push his agenda, saying in November 2022 that were Kevin McCarthy to be elected as Speaker of the House he would be beholden to the "QAnon caucus."

In October 2020, he tweeted out "QAnon is a crazy, dangerous, fringe conspiracy theory. I denounce it.
Trump refuses to say the same — simply because most of its followers support him. Worse, Trump amplifies QAnon, which can lead to real world consequences and violence. Enough already."

Sperry was later suspended from Twitter in August 2022 after making remarks about the FBI raid on Trump's Mar-a-Lago home.

"CNN is admonishing reporters not to call the FBI raid of Trump's home a 'raid,' but instead to term it as a "judge-approved search." He also took aim at Hillary Clinton's penchant for destroying documents in her possession.
ADVERTISEMENT
ADVERTISEMENT
twitter schiff