That fire, known to officials as the Chuckegg Creek fire, has consumed over 650 km² of forest. Citizens of High Level and other small communities affected by the blaze have been sent to reception centres in Slave Lake, High Prairie, Grande Prairie, as well as Misery Mountain Ski Resort. 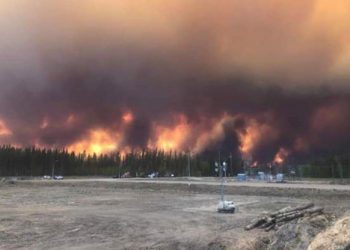 Northern Alberta is currently experiencing one of its worst bouts with wildfires in memory. Currently, there are 30 active fires burning in the province, with the monstrous inferno near High Level, a town three hours north of Grande Prairie, forcing over 4000 residents to flee their homes.

That fire, known to officials as the Chuckegg Creek fire, has consumed over 650 km² of forest. Citizens of High Level and other small communities affected by the blaze have been sent to reception centres in Slave Lake, High Prairie, Grande Prairie, as well as Misery Mountain Ski Resort.

It looks as though things will get worse before they get better. The B.C. Wildfire Service is sending over 250 staff, including 230 firefighters, 14 supervisors, a 19 person incident management team, and three agency representatives in hopes to slow the fire in its tracks.

Canadian Interagency Forest Fire Centre, the agency responsible for sharing of firefighting resources between B.C. and other jurisdictions, made the request. Alberta will be covering all associated costs.

“The fire is jumping from crown to crown of trees,” Kenney said at a news conference Tuesday. “Unfortunately, the dry conditions in northern Alberta are expected to continue for the foreseeable future, with the fire danger possibly increasing this week.”

Kenney reassured Albertans but reminded them that tough days are ahead, stating that “Wildfire season is a long and tough battle every year, and we need to prepare for the long haul this summer.”

Out of 430 wildfires in Alberta since the start of March, 30 are still active and five are classed as out of control.

Kenney also stated that he’s been briefed that the number of active fires currently in Alberta is “at or just slightly above the five-year average.”

Kenney went on to remind Albertans that forest fires are a natural occurrence in northwest Canada, and officials say the High Level fire is the first of its kind in around 80 years.

“Part of this is just burning off decades of accumulated fuel,” Kenney said. “It’s inevitable, it’s going to happen at some point. What’s different now in 2019 is that we have more built up communities in frontier areas like this.”