An activist group calling itself Oly Housing Now has occupied 17 rooms of a Red Lion Hotel on Capitol Way in downtown Olympia, WA, according to a news release issued by the group. 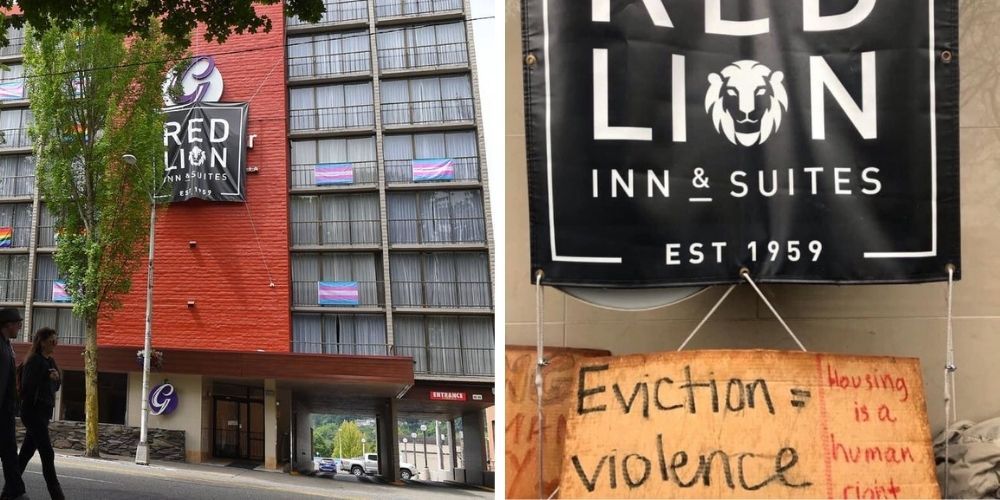 Update 9pm: At least 12 people have been arrested so far.

Update 8:30 PM: EMTs were seen entering the building. City of Olympia releases a statement on the events on the evening.

Update 8:20 PM: Sympathizers of the hotel occupiers are harassing journalists and citizen journalists documenting the event, trying to get them to stop filiming.

Update 8:15 PM: According to the David Ross Show, flashbangs were visible in some of the hotel rooms from the street and some of the occupiers may have set furniture on fire. The fire department has responded.

Update 6:50 PM: Protesters have assembled and are screaming and cursing at law enforcement while they clear the hotel. Local reporter says that the hotel staff had been calling law enforcement for help most of the day since the occupation began.

Update 6:40 PM: Police appear to be making arrests and escorting activists out of the hotel and removing banners placed by activists. SWAT teams are conducting room by room searches.

Update 6:30 PM: There is now a massive police response onsite at the hotel including at least two SWAT teams, Olympia Police Department, Washington State Patrol, Thurston County Sheriff and multiple other agencies. One reporter thinks the National Guard may have been on site due to seeing law enforcement dressed in camo. The hotel is on the Capitol campus where the Guard has been stationed since Jan 6th. A police officer securing the perimeter did not mention the Guard in her list of responding law enforcement agencies.

Update: 6:00 PM: According to local businesses, OPD has called them and told them to shut down because of the activists and possible protests.

An activist group calling itself Oly Housing Now, is claiming to have occupied 17 rooms of a Red Lion Hotel on Capitol Way in downtown Olympia, WA, according to a news release issued by the group. At 11 AM, Police received multiple calls to 911 from hotel employees who said that individuals entered the lobby armed with knives, axes and battons. One employee was allegedly assaulted when they attempted to close the doors, according to an Olympia Police Department spokesperson.

According to the Olympian, approximately 35 people are protesting inside and outside the hotel. Around 12pm Sunday, the group assembled at the nearby Sylvester park then marched to the hotel.

Around 12:30pm, the Olympia Police Department responded to the Red Lion for “a report of a disorderly group of protesters.” According to OPD, some of the activists are entering the establishment and attempting to “take over the front desk”. The staff are being advised to shelter in place while OPD mounted a response. A police cruiser was seen on site and then left.

According to The Olympian, no hotel employees were visible when they arrived, but members of a group called Olympia Anarchist Mutual Aid were bringing supplies into the building. A representative told the outlet that Saturday night, the group booked one night in the hotel rooms and then moved 33 people in and refused to leave Sunday morning at checkout.

Oly Housing Now (OHN) claimed they have purchased 17 hotel rooms for homeless people from nearby encampments and refuse to leave until the county designates funds for permanent housing. Their social media accounts seem to have been created in the last few days in anticipation of the occupation of the hotel.

OHN demanded “Thurston County to Pay for the Rooms with FEMA Funding That Covers Non-Congregate Shelter at 100 percent.” They also demanded an end to the clearing of homeless encampments, hotel vouchers for the homeless, taxes on developers and that the city and county build low income housing.

This follows a similar move by Antifa activists who called themselves Tacoma Housing Now, who booked rooms on Christmas Eve at a Travelodge in Fife, WA and then refusing to leave the establishment. Close to 60 people occupied the motel for several days until police raided the facility ending the occupation. Multiple occupiers had confirmed positive COVID-19 test results and spread it to the other activists and homeless occupants.

Members of Tacoma Housing Now were affiliated with Antifa and the occupation was celebrated on Antifa affiliated websites. Rebecca Parson, who was the spokesperson for the Fife occupation also shared the Olympia occupation on her Twitter account. Earlier in the year the group had occupied an abadoned school for similar purposes but were forced to leave because of hazards in the building.

Saturday, Tacoma Housing Now dumped more than 200 bags of trash in front of the unelected City Manager Pauli's house in order to send a message that the city should “Provide services like trash pickup and housing to our houseless community. Pay for it by firing her and killer cops!”