BREAKING: Antifa storm into banks in Portland; try to break inside federal courthouse

Just another day in Portland, Oregon: the riot capital of the United States. 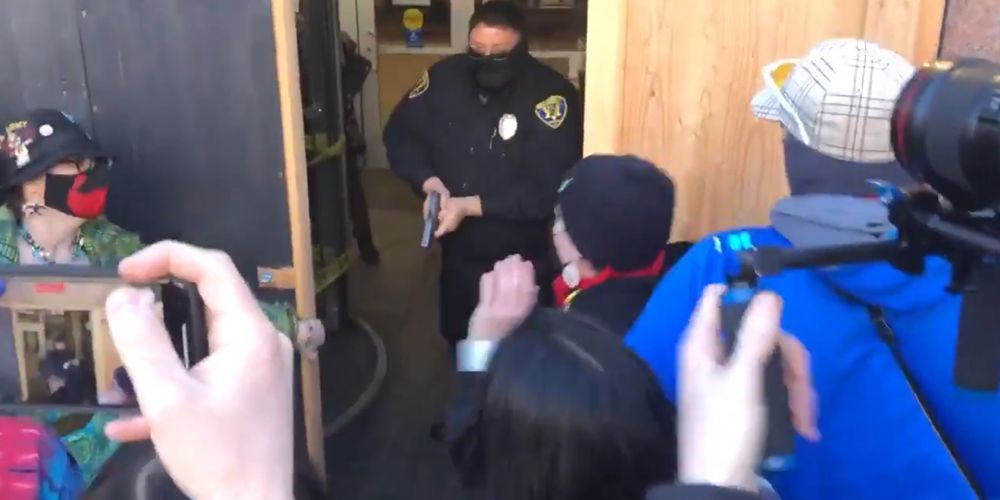 A dramatic scene unfolded in Portland this afternoon as Antifa and other left-wing activists tried to break into a Chase bank. A lone security guard managed to hold off the mob with his pistol.

The source of Ngo's video is an account titled the “45th parallel absurdist brigade,” who documented the day’s activities. They seem to be sympathetic to the protest's cause, seeing as they got nostalgic when passing by the Federal Courthouse where last summer, Antifa hosted nightly sieges against authorities.

The day’s demonstration was a gathering meant to protest against something called Line 3. Which according to a piece last month from The Guardian is an upcoming pipeline proposal to transfer  "nearly 1m barrels of tar sands a day from Alberta, Canada, to Superior, Wisconsin." A move that is facing pushback from activists over it being constructed through Native American lands, as well as concerns about the health of the water supply as a result.

The protesters went to Chase Bank because they’re reportedly one of the funders for the Line 3 pipeline project. The demonstrators made their way inside after the standoff and attending natives sang and played drums in the bank lobby.

After tagging the Chase and a nearby Apple store with graffiti, the protest made its way to Wells Fargo for an encore performance. This bank had a strong security presence noted by the activist crowd.

It all came back around to the Hatfield courthouse where DHS and the Antifa crowd are in a standoff, at the time of writing. Federal officers are currently responding to protect the courthouse as the Antifa crowd starts up their routine property damage to the area.