Independent journalist Tayler Hansen was removed from the event by police. 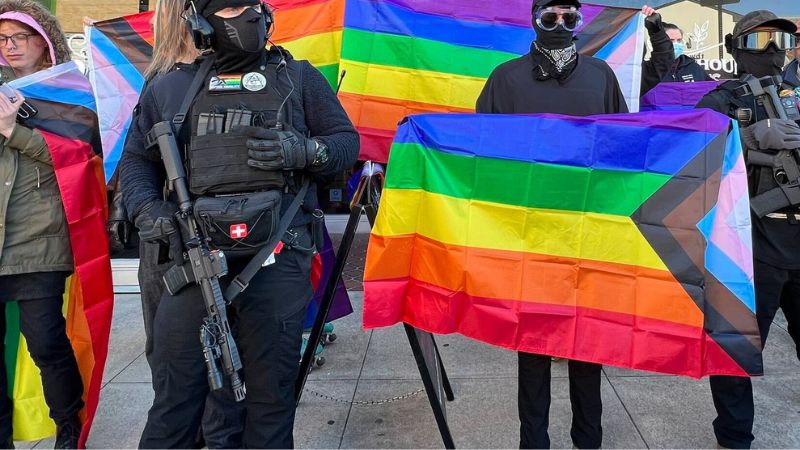 Joshua Young Youngsville North Carolina
Nov 19, 2022 minute read
ADVERTISEMENT
ADVERTISEMENT
A group of armed Antifa were standing guard outside of Patchouli Joe’s bookstore in Denton, TX on Saturday where a drag queen story hour was being held for children.

Independent journalist Tayler Hansen reported from the scene and noted that he was removed from inside the bookstore while armed Black Bloc Antifa were inside. He was told he "wasn't welcome anymore" when he was ejected. In a comment to The Post Millennial, Hansen said, "The book store was allowing ANTIFA inside to change into Black Bloc - I got inside the bathroom and there was a bunch of bags. ANTIFA freaked out because they realized they left their stuff in the bathroom."

"Inside of the Transgender Storytime for Children hosted in Denton— Children in attendance were gifted trans flags to wave around. I was almost immediately removed by Armed ANTIFA at the request of the owner, Police Officers were inside the event as well helping with security," Hansen posted on Twitter along with footage.

Hansen was on the scene with comedian Alex Stein as well as BlazeTV host Sara Gonzales, and all three posted images of the armed militants to social media.

Comedian Alex Stein posted video of himself confronting the Antifa members in Black Bloc getup and said they're "protecting these children so they can go get indoctrinated and go in there for transgender storytime you're such a good American. God bless"

Stein confronted the Antifa members, taking video of the masked group, and said, "these are the real cowards, they're hiding behind their masks. Little guns. They think they're so tight."

"They're gonna walk around with a gun. They can't handle themselves like a real man. Alright guys, I just want to announce on primetime 99 Alex Stein and I love y'all even though you guys don't love me and I know you guys probably love children a little too much," Stein added.

She also posted a full unhinged meltdown from one of the attendees.

"A Far-Left Attendee helping with security at todays “Transgender Storytime for Kids” in Denton tells @SaraGonzalesTX to “SHUT THE F*** UP” in response to her challenging his positions on transgender children."

In the video Stein posted, police can be seen on scene standing around.