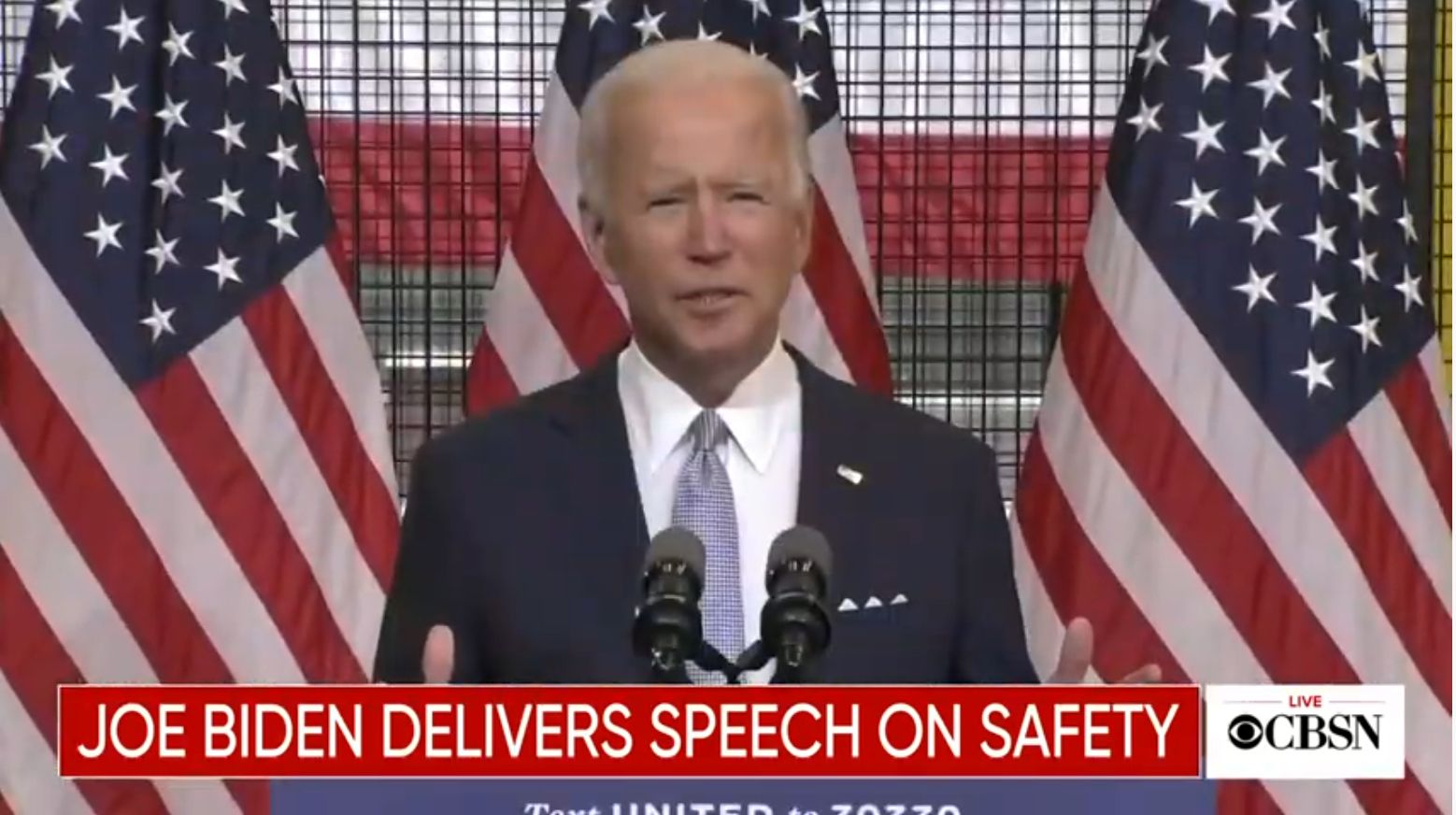 Joe Biden gave a his first speech outside of Delaware today, in Pittsburgh, and in mentioning the rioting in American cities, he said that "violence will not bring change it will only bring destruction."

He claimed that Trump cannot stop the violence, but that it will continue if Trump is reelected.

This after a glitchy start.

He said that rioting and looting are not protesting, and that this kind of behaviour is not what was taught by America's famed civil rights leaders. "We must not burn, we have to build," he said.

"Trump can't stop the violence because for many years he's fomenting it," Biden said. His claim was that it is Trump's failure to call on his own supporters to stop acting as a militia that is at fault for the destruction in America's cities.

Biden blamed white nationalists, right-wing militias, and Donald Trump directly for the violence in America's cities. He did not mention Antifa, despite the fact that the radical group is responsible for much of the violence, including the alleged gunning down of a Trump supporter on the streets of Portland.

He said the President is a man "who makes things worse not better," and "who sows chaos rather than providing order."

Biden spoke with sadness about nurses and doctors in Wisconsin who have seen death and health crises over the past six months. That state has seen 75,337 cases, 66,699 recoveries, and 1,122 deaths.

He addressed the accusations that have been coming from the White House that the rioting and violence in cities are exemplary of Joe Biden's America. "Do I look like a radical socialist with a soft spot for rioting? Really?"

He attempted to reverse the narrative of Joe Biden's America by saying that "the violence we're seeing in Donald Trump's America."

"He keeps telling us," Biden said, "that if he was president you'd feel safe, but he is president." He went on to say that "Donald trump adds fuel to every fire" and that Trump refuses to acknowledge that there's a racial justice problem in America and that he and won't condemn militants.

Biden thinks we'd see less violence if he was president instead of Trump, and claimed that he'd personally spoken to the families of George Floyd and and Jacob Blake, and their quest for justice.

Those families, he said, believe that the violence doesn't honour either of those men.

Biden said that he would not bring US federal agents to bear to control rioting cities. he said he wants to unite the nation.

Biden touted his record as Vice President, saying that it marked a 15 percent decrease in American crime. "The murder rate now is up 26 percent across the nation under Donald Trump."

"More cops have died from covid this year than have been killed on patrol," he said.

Biden blamed Trump for COVID as well as the decimation of small businesses that were shut down by social distancing and self-quarantine guidelines from governors and mayors.

"Trump took a good economy and threw it back into the ditch through his failure to get COVID under control," he said.

Biden brought up safety as a mandate that he believes belongs to the American president.

"We should talk about basic security about being able to look your child in the eye and tell them everything's going to be ok," Biden said. "That's the job of the president."

Biden backed up his campaign slogan by saying that "We won't just build things back the way they were before we're going to build them back better." his plan includes renewable and sustainable energy, federal child care programs and a "clean energy strategy."

Having been accused of wanting to ban fracking as part of a clean energy strategy, Biden said unequivocally that he was not. "I am not banning fracking no matter how many times Donald Trump lies about me."

"The future that's what this is all about," said Biden, leaning on rhetoric. He said that we should all be listening to Julia Jackson, Jacob Blake's mother, and not Donald Trump.

"We will rid ourselves of this toxin or will we make it a permanent part of our nation's character," Biden said. Going on to blame Trump's character for the turmoil in America. "Trump has sought to remake this nation in his image, selfish angry dark and divisive this is not who we are."

Biden claimed that Donald Trump is instilling fear in America, but that he believes "American's are stronger than that." He said that we should "be not afraid," quoting the Pope, and that "fear never builds the future but hope does."

Whether the nation will get it together after these words from the presidential hopeful is yet to be seen. He did not take questions from the press, so no one was able to ask.