"I've two political heroes. My entire life. When I started off as a 22-year-old on the east side of the civil rights movement," Biden said. 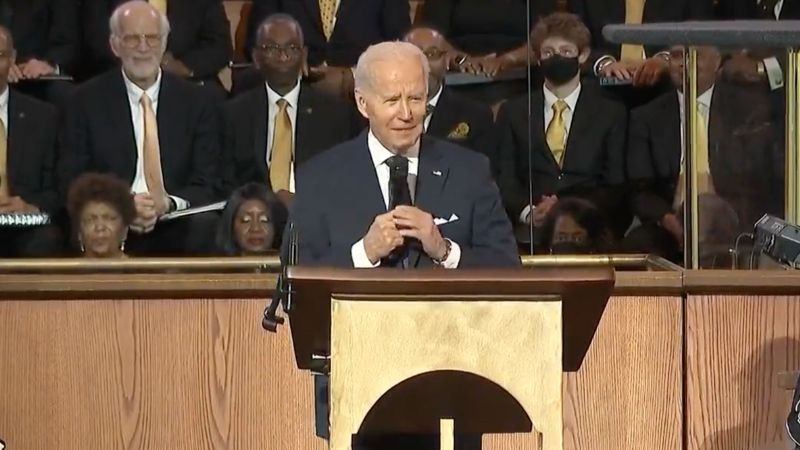 On Sunday, Joe Biden gave a speech at the Ebenezer Baptist Church in Atlanta in honor of Dr. Martin Luther King Jr where he repeated false claims about his supposed involvement in the civil rights movement and protesting apartheid in South Africa.

"I've two political heroes. My entire life. When I started off as a 22-year-old on the east side of the civil rights movement," Biden said. "I got elected to the United States Senate when I was 29 and wasn't old enough to take office."

"And I had two heroes, Bobby Kennedy. I admired John Kennedy, but I could never picture him at my kitchen table. But I could Bobby and no malarkey, Dr. King, Dr. King," Biden added.

Biden has made several references to being involved in the civil rights movement, a claim CNN reports is false. In 2021, he specifically said at a press conference that he was "arrested" at a civil rights event in his youth, but there is no evidence of any such occurrence.

Biden repeated the claim in January of 2022 during a speech in Atlanta, and left-leaning PolitiFact rated the comments as "false."

"I took on apartheid in South Africa and a whole lot else," Biden later claimed in the speech.

In 2020, as Insider reports, Biden repeated a story for weeks that he was arrested in South Africa while trying to meet with Nelson Mandela. He later admitted the story was not true.

During the speech Biden also said, "I may be a practicing Catholic, but I used to go to 7:30 mass every morning in high school and then in college, before I went to the black church. Not a joke."

As the New York Post reports, no members of Biden's local Delaware black church have any memory or record of the president ever attending their congregation.

In his gaffe-filled speech Biden also said to an unknown attendee during a non sequitur, "What's your name honey? It's good to see you. Maybe I can have a picture with you before I leave, ok?"