BREAKING: President Biden: 'Our forces are not going to fight in Ukraine'

"Our forces are not and will not be engaged in a conflict with Russia in Ukraine," Biden said unequivocally. 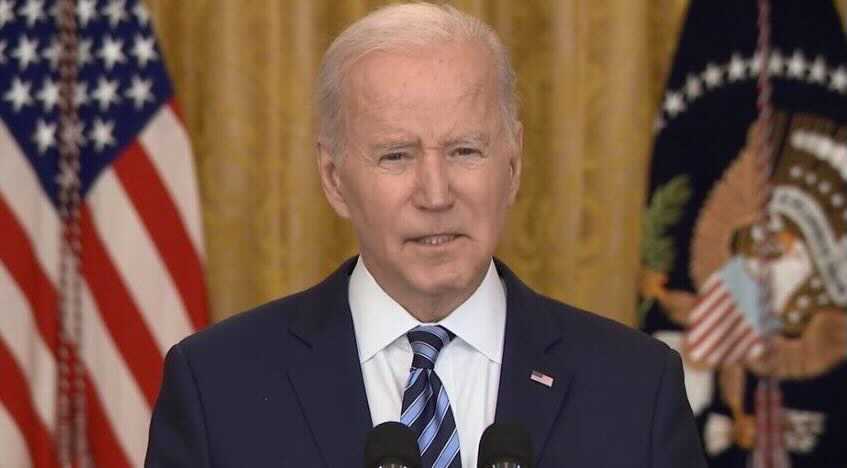 President Joe Biden addressed the nation and the world on Thursday afternoon to speak to the invasion of Russian military forces into Ukraine. He said that the events are "unfolding largely as predicted."

Cyberattacks, and "staged political theatre in Moscow," have been seen, Biden said, slamming Putin for saying that Ukraine has committed genocide and would attack Russia.

Biden said that as the UN was trying to aim for peace, Putin was declaring war.

"Putin is the aggressor, Putin chose this war, and now he and his country will bear the consequences."

Exports will now be limited to Russia, in addition to previously levied sanctions on Russia. Biden spoke about the "joint impact" of the response of G7 nations, who are "in full and total agreement." Russia will be limited in its ability to transact in any currency.

"We've already seen our impact," Biden said, on the Russian rouble, as the Russian stock market plunged on Thursday.

"We've cut off Russia's largest bank," he said, "from the US financial system." Today, the US and allies are blocking transaction of 4 additional banks, in the amount for $50 bullion in assets. This includes not only the banks, but Russian elite citizens and their families.

Russia has been prevented from raising money, and now Russian companies will also be blocked from raising funds "as we squeeze Russia's access" to the 21st century economy.

This, Biden estimates, "will strike a blow" to Russia's ability to further increase their armed forces, and it will "be a major hot it Putin's long term ambitions"

The US will defend her allies in Europe. 30 allied nations and close parters will meet this week to "strengthen all aspect of our NATO alliance."

"Our forces are not and will not be engaged in a conflict with Russia in Ukraine," Biden said unequivocally.

The US will defend every bit of NATO territory, however. "The is no doubt that the United States and every ally will meet our article 5 commitments," he said.

Authorized the deployment of ground and air forces to the Baltic states, Biden said, noting that NATO is also adding their forces "to ensure collective defense."

NATO also enacted an activation response plan to protect allies on the eastern boundaries of Europe.

Biden spoke to the need for "additional moves," as well, and said he was conferring with DOD Sec Austin and the Joint Chiefs.

US gas companies "should not exploit" this crisis to raise prices for Americans at the pump, he said, as he explained that allies are also working to keep fuel supplies flowing.

The US "stands up to bullies, we stand up to freedom, this is who we are," he said.

Biden warned Russia that the US would respond in the event that there were cyber attacks against US companies or assets.

He said that he reassured Zelensky that the US would support Ukrainians as they defend their country, and that Russia has been engaged in a propaganda war to justify their aggression.

"Putin has unleashed great pain" on Ukrainians, he said, noting that this is a dangerous moment for all of Europe.

Biden said this has always been "about naked aggression," and that Putin is choosing a war without a cause in service to his "sinister vision" for our world.

Biden took questions from reporters after speaking. "To follow up, sir," one reporter asked, "are you urging China to help isolate Russia?"

"I'm not prepared to comment on that at the moment," Biden said.