Video footage from inside the Planalto Palace shows the protestors, decked out in patriotic outfits, walking through the gas around the offices. 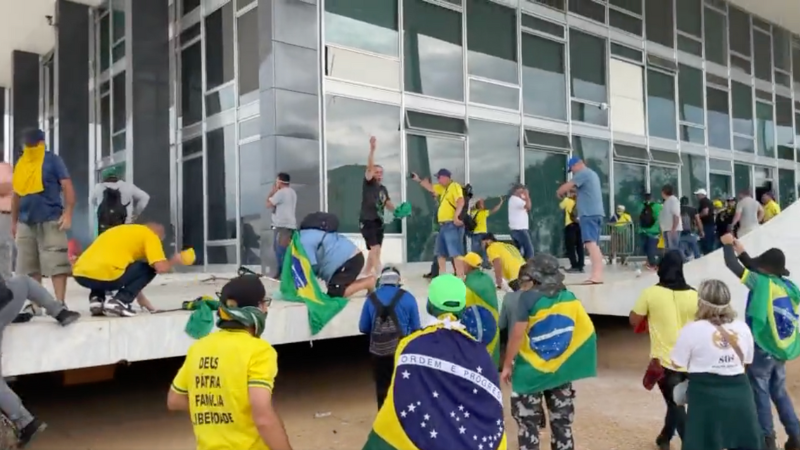 Olivia Rondeau
Jan 8, 2023 minute read
ADVERTISEMENT
ADVERTISEMENT
The headquarters of Brazil's executive and legislative branches were stormed by demonstrators protesting against the election of socialist President Luiz Inácio Lula da Silva on Sunday, breaking into the presidential palace as well as the National Congress building.

Palácio do Planalto, or Planalto Palace in English, is the workplace of Brazilian presidents, and is located in the same plaza as the National Congress of Brazil, as well as the Supreme Federal Court. The Praça dos Três Poderes, or Three Towers Plaza, is in the capital city of Brasília.

Brazilian outlet Metropoles reports that a hundreds of "Bolsonarists," or supporters of former President Jair Bolsonaro, "broke through blocks that prevent the entry of non-accredited people and entered the Planalto parking lot," before eventually making their way into the Planalto Palace and National Congress buildings.

Footage shared by American conservative activist ALX shows the moment protestors broke through the barrier as police attempted to subdue them. Eventually the police had to retreat while the crowd stormed through.

Video from inside the Planalto Palace shows the protestors, decked out in patriotic outfits, walking through the gas around the offices.

Around 2:40 pm, the protestors also entered the National Congress building under a "shower of tear gas bombs."

More footage shows masses of protestors climbing up the ramps on the outside of the congressional building to get inside.

Renato Souza, a reporter with Brazilian publication Portal R7, shared video from the inside of the building.

"President Lula is not on site," he reported.

In response to the invasion, Lula has "decreed federal intervention in the Federal District," according to the Brazil-based Tupi Report.

Meanwhile, Bolsonaro is suspected to have been in Orlando, Florida, since December, reported The Hill.

Diario 98 columnist George Marques reported that while the buildings were being invaded, a portion of the Bolsonaro supporters stayed behind to pray.

Lula, who was inaugurated just one week ago, won 50.83 percent of the vote compared to conservative incumbent Jair Bolsonaro, who won 49.17, in the country's October 2 vote. There was a runoff election afterwards on October 30 which Lula won, and that win was immediately ratified by the Superior Electoral Court.

Bolsonaro launched a challenge to the presidential election in late November, claiming that there were "signs of irreparable... malfunction" in some of the country's electronic voting machines. The head of Lula's Workers Party said the bid was mere "chicanery."

Lula da Silva, who served two consecutive presidential terms 12 years ago, was convicted in 2017 for money laundering but a court threw out the conviction in March 2021.

With a country divided on the results of the election, the left-leaning Supreme Court banned guns in the country's capital of Brasília and suspended registered gun owners' licenses, reports CNN.
ADVERTISEMENT
ADVERTISEMENT
brazil