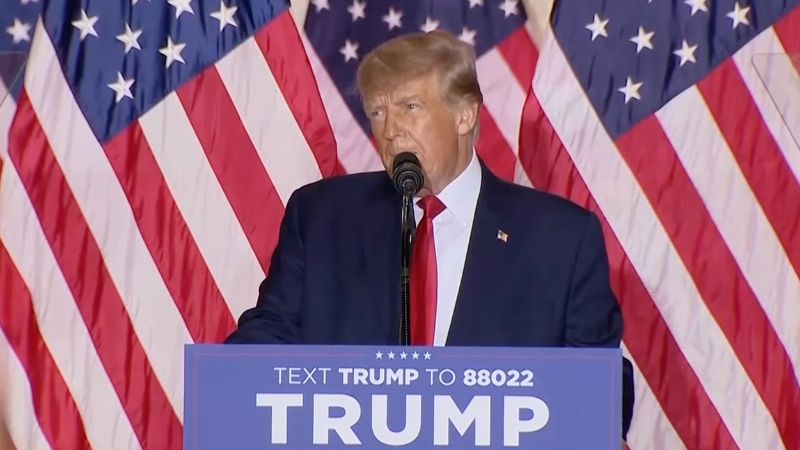 It was only a week ago that Donald Trump announced that an announcement would be forthcoming. Teased out for months, with the former president saying that he would "very probably" run again, Trump made good on that promise Tuesday night from his home at Mar-a-Lago.

"I am running because I believe the world has not yet seen the true glory of what this nation can be," he later added. "We have not reached that pinnacle. Believe it or not, in fact, we can go very far. We’re gonna have to go far. First, we have to get out of this ditch."

Flanked by supporters and family, Trump announced what so many have long anticipated, that he would be making another run for president.

Trump said that when he left office, "the United States stood ready for its golden age. Our nation was at the pinnacle of power, prosperity, and prestige, towering above all rivals, vanquishing all enemies, and striding into the future confident and so strong."

Trump walked through his accomplishments, reminding supporters of the booming economy, energy independence, decreased drug flow over the border, and tight trade deals with China.

Trump celebrated the accomplishments of his administration, noting that "China was kneeling back on its heels," the "vicious ISIS caliphate, which no president was able to conquer, was decimated by me and our great warriors in less than three weeks," and noted that North Korea "had not launched a single long-range missile since my summit Chairman Kim Jong Un."

"Under our leadership, we were a great and glorious nation, something you haven’t heard for quite a long period of time."

He spoke about increasing jobs in the US, and the respect shown to the US by foreign leaders under Trump's leadership.

As to his opposition, Trump brought up how ready Democrats were to claim that he would start wars, and instead his administration started no new conflicts.

The crowd could barely contain their excitement, chanting "Trump, Trump, Trump." They were anxious for him to say what they had all come to hear. But before he gave them what they wanted, he explained further why he believes his potential second term is what the nation needs.

Trump said the US is a failing nation, a nation in decline. A big reason for that is the open border, he said, which is not only flooding the nation with illegal immigrants but with drugs.

"Now we are a nation in decline," Trump said, noting the failures of the Biden administration, including rampant inflation, record-high gas prices, the disastrous Afghanistan withdrawal, and the administration’s open border policies.

Biden, Trump said, is the leader who is dragging the nation to the brink of nuclear war.

"The decline of America is being forced upon us by Biden and the radical left," Trump added.

The speech, similar to those he has given at rallies over the last two years, was substantially more sedate due in part to the surroundings and the gravity of the announcement.

Trump noted the Republican takeover of the House, telling the crowd, "Nancy Pelosi has been fired."

Noting the increase in Republican voters of "all walks of life," Trump said, "This will not be my campaign. This will be our campaign together."


Speaking of his goals for his next potential presidency, Trump said that his administration would "immediately tackle inflation," and "we will again put America first."

"Every policy must be geared for that which supports the American worker, the American family, and businesses both large and small and allows our country to compete with other nations on a very level playing field."

"We will wage war upon the cartels and stop fentanyl and deadly drugs from killing 200,000 Americans a year."

"When I’m in the White House our schools will cease pushing critical race theory as they were, radical civil and gender insanity, or they will lose all federal funding," said Trump, who also noted that biological men would be banned from competing in women’s sports.

"We will abolish every Biden Covid mandate and rehire every patriot who was fired from our military with an apology and full pay back."

Trump also stated that he would push for term limits for members of Congress, an end to stock trading for these members, voter ID requirements, and "only paper ballots" to be used.

Trump later added, "We will expand the frontiers of human knowledge and extend the horizons of human achievement, and we will plant to our beautiful American flag very soon on the surface of Mars, which I got started."

"Thank you very much. I'm asking for your vote, I am asking for your support, and I am asking for your friendship and your prayers, in this very incredible but dangerous journey. If our movement remains united and confident that we will shatter the forces of tyranny and we will unleash the glories of liberty for ourselves and for our children and for generations yet to come.

Shortly before his announcement, it was revealed that Trump had filed paperwork with the Federal Election Commission stating his intentions to run for president.


The ballroom at Mar-a-Lago was full of supporters and press anxious to hear what many have anticipated since Trump left office in 2021. Trump has held rallies non-stop across the US, holding together his base and offering a persistent alternative to the Biden regime's failed economic and Covid policies. He's defended his record, and has been a constant critic of Biden's spending in Ukraine, handling of the border, and social programs, to name a few.

Trump's announcement of an announcement came on the eve of the US midterm elections, which were heralded as a "red wave," until the results came in. While it is looking like the Republicans will gain control of the House, it will be by a slim margin, with 218 seats to the Democrats' 206, only a five seat gain for the GOP.

While there was hope among conservatives that they would take control of the Senate, those dreams were dashed as they lost one seat, that of outgoing Pennsylvania Senator Pat Toomey, whose seat went to John Fetterman. Much was made of the fact that some of those candidates Trump endorsed, notably Dr. Mehmet Oz in Pennsylvania, did not win their elections.

None of this has appeared to deter Trump, or his supporters, from launching a second play for the White House, which would give Trump that second term that was denied him after the 2020 general election loss to President Joe Biden. Trump's loss was both decisive and divisive for the GOP, with Trump supporters believing that the loss was the result of shenanigans, electoral foul play, or outright election stealing, while those more establishment conservatives either played mum on these claims or, as Liz Cheney did, spoke out against them and were ostracized and lost her Wyoming congressional seat.

It is widely believed that Florida Governor Ron DeSantis will run against Trump in the 2024 election. His recent win in Florida's gubernatorial race and his policies fighting wokeness in the state have gained him national attention, and national support. In the wake of the midterm elections, there has been further division in the GOP, with conservative media outlets like the New York Post and Fox News seeming to pivot to DeSantis away from Trump.

Trump has already been endorsed by allies in the GOP, Marjorie Taylor Greene and Elise Stefanik among them.

While DeSantis has not yet announced his candidacy, and his press team has vocally said that they are focused on the Sunshine State, this announcement essentially launches the GOP primary much earlier than usual. Others who have indicated that they may make a run are Mike Pompeo and former VP Mike Pence.