Musk entered the San Francisco headquarters ahead of the $44 billion deal closing, and was faced with skeptical employees worried for their jobs and the company culture. 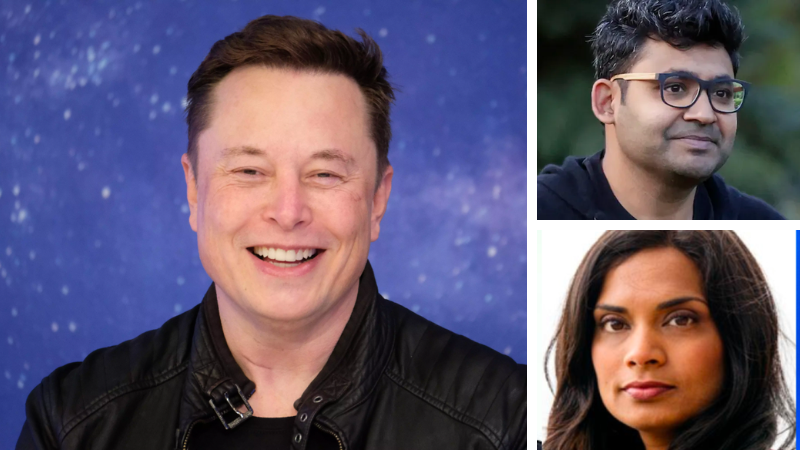 "CEO Parag Agrawal, chief financial officer Ned Segal, and Vijaya Gadde, head of legal policy, trust, and safety, were all fired, according to the people. Sean Edgett , the company’s general counsel, was also pushed out, one of the people said," the Washington Post reports.

The Thursday night firing indicates that Musk is taking the reigns quickly and forcefully, and will be closely involved in making decisions about content and management decisision.

"The three top Twitter executives were hastily shuttled from the building, the people said," according to the Washington Post.

Musk entered the San Francisco headquarters ahead of the $44 billion deal closing, and was faced with skeptical employees worried for their jobs and the company culture.

Musk was clear on Thursday in a letter to advertisers, saying "The reason I acquired Twitter is because it is important to the future of civilization to have a common digital town square, where a wide range of beliefs can be debated in a healthy manner, without resorting to violence."

"There is currently great danger that social media will splinter into far right wing and far left wing echo chambers that generate more hate and divide our society," Musk said.

"Twitter obviously cannot become a free-for-all hellscape, where anything can be said with no consequences," he said.

When Musk's buy of the platform was announced in April, Gadde cried during that meeting, complaining about how the copmany could change under Musk's leadership. She was widely reported to have been instrumental in the suppression and censorship of the New York Post's reporting on Hunter Biden's laptop, which revealed a pattern of influence peddling and shady business deals by the Biden family.

"She got what she deserved," Human Events Daily's Jack Posobiec told Tim Pool on Tuesday night.

Segal made clear that even if Donald Trump were to run for president again in 2024, his Twitter account would not be restored. Trump was banned from the platform after the riot at the Capital on January 6, 2021.

Agrawal, who has said in the past that Twitter was "not bound by the first amendment," took over for Twitter founder Jack Dorsey in November 2021. This was after the platform had suppressed and censored reporting from the New York Post on Hunter Biden's laptop, which Dorsey later had to apologize for and admit was done in error.


"Our role," Agrawal said of Twitter in 2020, "is not to be bound by the First Amendment, but our role is to serve a healthy public conversation and our moves are reflective of things that we believe lead to a healthier public conversation."

"The kinds of things that we do about this is, focus less on thinking about free speech, but thinking about how the times have changed," Agrawal said.

"One of the changes today that we see is speech is easy on the internet. Most people can speak. Where our role is particularly emphasized is who can be heard. The scarce commodity today is attention. There's a lot of content out there. A lot of tweets out there, not all of it gets attention, some subset of it gets attention.

"And so increasingly our role is moving towards how we recommend content and that sort of, is, is, a struggle that we're working through in terms of how we make sure these recommendation systems that we're building, how we direct people's attention is leading to a healthy public conversation that is most participatory."