"...it's worth considering how, if at all, the current generation of popular sites of gay networked sociability might fit into an overall queer social landscape that increasingly includes individuals under the age of 18." 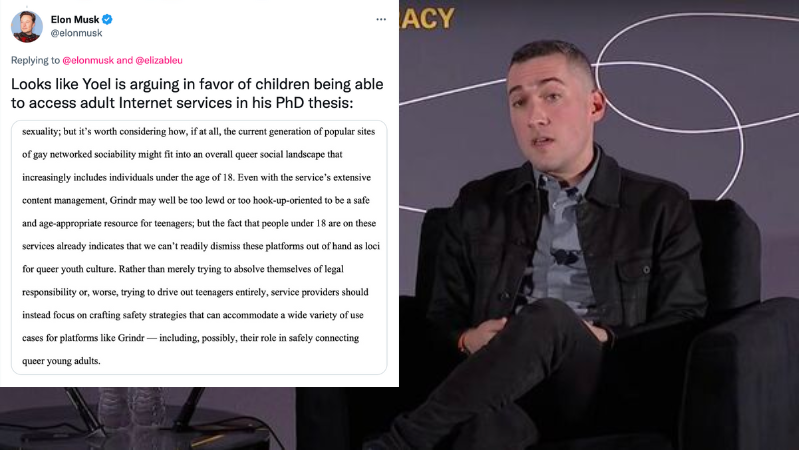 On Saturday Twitter CEO Elon Musk called out former head of Twitter Trust and Safety Yoel Roth for "arguing in favor of children being able to access adult Internet services in his PhD thesis."

Musk tweeted an excerpt from Roth's thesis, portions of which read, "...it's worth considering how, if at all, the current generation of popular sites of gay networked sociability might fit into an overall queer social landscape that increasingly includes individuals under the age of 18."


"The fact that people under 18 are on these services already indicates that we can't readily dismiss these platforms out of hand as loci for queer youth culture," Roth said. "Rather than merely trying to absolve themselves of legal responsibility or, worse, trying to drive out teenagers entirely, service providers should instead focus on crafting safety strategies that can accommodate a wide variety of use cases."

Musk was responding to a tweet from Eliza Bleu that linked to a Roth tweet from 2010 that read, "Can high school students ever meaningfully consent to sex with their teachers?" Roth also linked to a Salon article titled "Student-teacher sex: When is it OK?"


The Salon piece documents the story of a High School choir teacher, Matthew Hirschfelder,  who had sex with a student. According to Salon, "Things get messier when looking at cases like Hirschfelder's. If we draw the line at high school graduation, as opposed to at a student's 18th birthday, it means that a teacher having sex with a 20-year-old high school student could be outlawed."

Fox News producer Gregg Re reached out to the Annenberg School for Communication at Penn State University, asking for comment as to Roth's controversial thesis.

"You awarded a deviant named @yoyoel a PHD," Re said along with his inquiry.

On November 20, Roth published an op-ed with the New York Times and said he fought "dangerous misinformation" while at the social media giant, and said, "yes, ban[ning] President Donald Trump" was part of his efforts. He also said Musk's goal of  "unfettered speech" was not right for the platform.

Twitter users called Roth out then for how he allowed child pornography to flourish at the outlet. One user wrote, "Why was child pornography permitted on Twitter for years under your watch, but stamped out within 48 hrs after you left?"

The multiple rounds of the "Twitter Files" confirmed that Roth was complicit in censorship of conservative voices on the site. In early December, Roth defended banning the Babylon Bee and Libs of TikTok on Twitter and said the users make "people unsafe in the world."
ADVERTISEMENT
ADVERTISEMENT
roth musk