Committee Chair Bennie Thompson said "we have left no doubt, knowing that Donald Trump led an effort to up in American democracy that directly resulted in the violence of January 6." 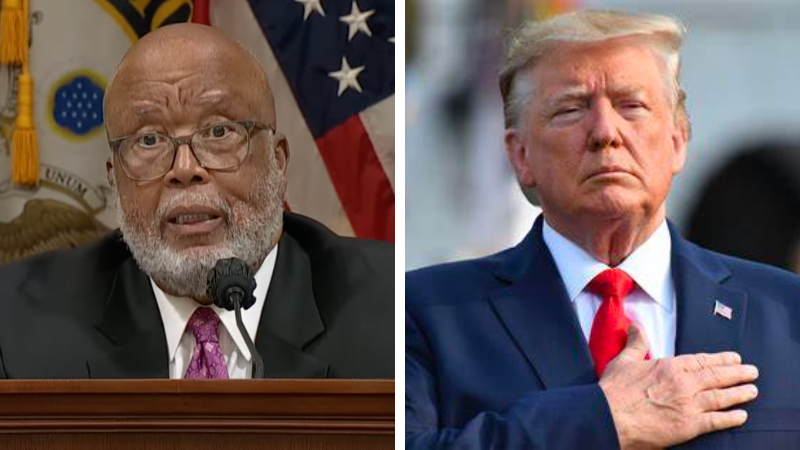 Libby Emmons Brooklyn NY
Oct 13, 2022 minute read
ADVERTISEMENT
ADVERTISEMENT
On day 9 of the January 6 Committee hearings, lawmakers on the committee voted to issue a subpoena compelling former President Trump to appear before that body. The committee, seating only two members of the GOP, both of whom are outgoing, Liz Cheney and Adam Kinzinger, voted to subpoena Trump.

"Mr. Chairman on this vote, there are nine ayes and zero nos," the clerk said after the vote, and the resolution was agreed to.

Speaking during the hearing and by way of calling for a vote, Committee Chair Bennie Thompson said "we have left no doubt, knowing that Donald Trump led an effort to up in American democracy that directly resulted in the violence of January 6."

"He tried to take away the voice of the American people in choosing their president and replace the will of the voters with his will to remain in power," Thompson said. "He is the one person at the center of the story of what happened on January 6. So we want to hear from him. The committee needs to do everything in our power to tell the most complete story possible, and provide recommendations to help ensure nothing like January 6 ever happens again."

"We need to be fair and thorough and gain a full context for the evidence we've obtained," Thompson continued. "But the need for this committee to hear from Donald Trump goes beyond our fact-finding. This is a question about accountability to the American people. You must be accountable. He is required to answer for his actions. He was required to answer to those police officers who put their lives and bodies on the line to defend our democracy, he's required to answer to those millions of Americans whose votes he wanted to throw out as part of his scheme to remain in power," Thompson said.

"And whatever is underway to ensure this accountability under law, this committee will demand a full accounting every American person of the events of January 6. So it is our obligation to seek Donald Trump's testimony as precedent in American history of Congress to compel the testimony of a precedent precedent. That's also precedent for presidents to provide testimony and documentary evidence to congressional investigators. We also recognize that a subpoena to a former president is a serious and extraordinary action," Thompson continued.

"That's why we want to take this step in full view of the American people, especially because the subject matter at issue is so important to the American people. And the stakes are so high future in our democracy. And so I recognized and vice chair, this training the Wyoming to offer its chairman pursuant to today's notice, I send to the desk a committee resolution and ask for its immediate consideration," Thompson said, before passing it off to outgoing Wyoming Congresswoman Liz Cheney, who called for the vote.

"Our committee now has sufficient information to answer many of the critical questions posed by Congress at the outset," Cheney said. "We have sufficient information to consider criminal referrals from multiple individuals and to recommend a range of legislative proposals to guard against another January 6, but a key task remains. We must seek the testimony under oath on January 6 central player more than 30 witnesses in our investigation have invoked their fifth amendment right against self-incrimination. And several of those did so specifically in response to questions about their dealings with Donald Trump directly."

Cheney also said that "Witnesses have also gone to enormous lengths to avoid testifying about their dealings with Donald Trump. Steve Bannon has been tried and convicted by a jury of his peers for contempt of Congress. He is scheduled to be sentenced for this crime later this month. criminal proceedings regarding Peter Navarro continue. And Mark Meadows, Donald Trump's former Chief of Staff has refused to testify based upon executive privilege. The committee's litigation with him continues."

"Mr. Chairman, at some point the Department of Justice may well unearth facts that these and other witnesses are currently concealing. But our duty today is to our country and our children and our constitution," she went on. "We are obligated to seek answers directly from the man who set this all in motion. And every American is entitled to those answers. So we can act now to protect our republic. So this afternoon, I am offering this resolution that the committee directs the chairman to issue a subpoena for relevant documents and testimony under oath from Donald John Trump in connection with the January 6 attack on the United States Capitol."

The vote is intended to make the case "that Trump was the central antagonist in the attack and in preceding efforts to overturn the election," Axios reports.

The committee has questioned whether or not they should attempt to compel the former president to testify as they attempt to prove that he incited a riot at the Capitol Building on January 6, 2021.

The committee has presented hearsay evidence in an attempt to bolster its claims but has not proven that there was any prior intention or planning. Trump and his team had planned a rally that day at Washington, DC's Ellipse, which went off as planned.

Axios reports that if Trump were subpoenaed, he would be unlikely to sit before the committee and testify. They report that it's likely that the committee does necessarily want the spectacle of Trump's testimony, but is looking for a response from his team.