"Having the financial support of LGBcoin is incredible, especially at such a pivotal time in our team's growth as we work to build to the next level of competition," said Brown. 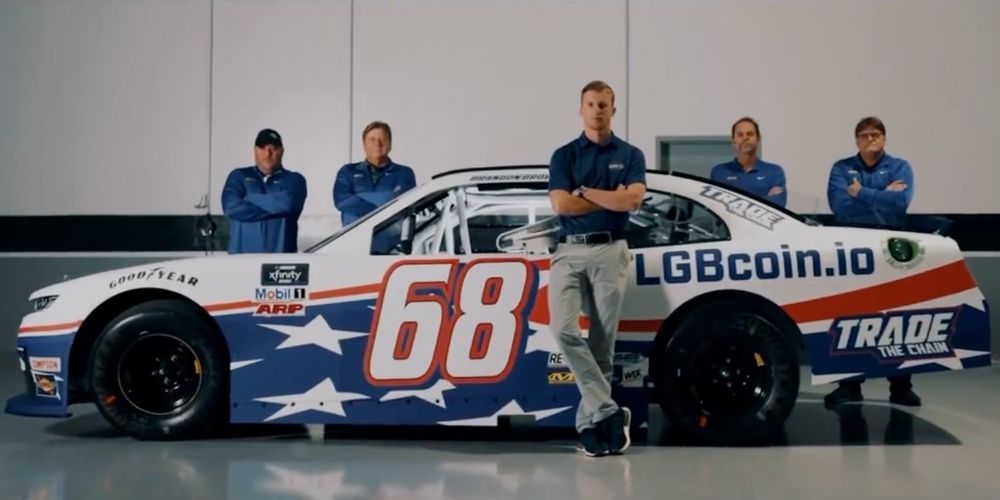 On Thursday, Brandonbilt Motorsports announced that Let's Go Brandon Coin would be their primary sponsor for their No. 68 car that Brandon Brown drives during the 2022 NASCAR Xfinity Series season.

In a video released as part of the announcement, the team unveiled their car for the season, a patriotic-themed Chevrolet Camaro covered in red, white, and blue and the LGBcoin.io coin logo.

"We are thrilled to partner with Brandonbilt Motorsports and Brandon Brown for the 2022 NASCAR Xfinity Series season," said James Koutoulas, self proclaimed LGBcoin HODLer and founder of Typhoon Capital Management.

"Brandon is not only an incredibly talented driver, but also a thoughtful individual wise beyond his years. His commitment and singular focus on his profession is inspiring and his personal story is one that we can all be proud of—an American story of success and perseverance. Brandon is truly America's Driver," he continued.

"We are proud to support Brandon this season, to help him continue his American dream," said Koutoulas. "If we do our job right, when you think of us, and you hear, 'Let's Go Brandon,' you'll think and feel, 'Let's Go America.'"

Brown expressed his gratitude towards LGBcoin becoming a sponsor, highlighting the whirlwind of events that led to this moment.

"Having the financial support of LGBcoin is incredible, especially at such a pivotal time in our team's growth as we work to build to the next level of competition," said Brown. "From wondering if we would have the financial means to continue to compete, to my first major win (at Talladega no less), to becoming an unintentional meme, this past season was a rollercoaster. The support of sponsors like LGBcoin empowers us to be as competitive as possible and I’m looking forward to competing hard on the track in 2022."

LGBcoin was born in the wake of Brown's win at Talledega in October, where an NBC reporter interviewing Brown after his win mistakenly said the crowd was saying "Let's go Brandon." The crowd was instead saying "f*ck Joe Biden."

"Brandon is a talented and passionate racecar driver, focused on perfecting his craft to take his skills to the highest level," LGBcoin said in a statement posted to their website.

"His kindness and charm are unrivaled. Recently, Brandon spoke out for the first time since the infamous post-race interview that birthed a meme to share his thoughts and make clear that he has 'no interest' in politics. As Brandon pointed out, it's weird to hear something that has been chanted only by your friends and family turned into a political meme."

"He doesn't love the negative connotation and he'd like to redefine the phrase into something more positive. We can't blame him," they continued. "This country needs more positive and good-natured people like Brandon and that’s just one of the many reasons why we support him. NASCAR is an expensive sport, and when you’re competing against well-funded racing teams, you need every financial advantage."

"Brandon's personal story is one that we can all be proud of—an American story of success and perseverance, building a race team with his dad from scratch to compete at some of the highest levels of the sport. Brandon is truly America's Driver," they added.

"LGBcoin is proud to support Brandon, providing financial resources to help him stay competitive and that empower him to do what he loves: drive. We don't expect Brandon to lead a political movement, and neither should you. But we want him to have the support to continue to live his American dream and to make us all proud," they concluded.

Brown had been having trouble finding sponsorships after the Let's go Brandon trend too off. His name was the origin of the meme, when an NBC sports reporter spoke to him after a win and, upon hearing the crowd chant "F*ck Joe Biden," told viewers that they were saying "Let's go Brandon."