Murphy announced her return with a simple message of gratitude to Joe Rogan, Elon Musk, ad Raicilla for bringing her back on.

Libby Emmons Brooklyn NY
Nov 21, 2022 minute read
ADVERTISEMENT
ADVERTISEMENT
Noted Canadian feminist Meghan Murphy is back on Twitter. Her account was reinstated Sunday amid a wave of reinstatements of other previously banned accounts, such as Project Veritas, Donald Trump, The Babylon Bee, and others. Murphy was permanently suspended from the platform in 2018 for referring to Canadian trans activist and trans-identified biological male Jessica Yaniv as "him."

Murphy announced her return with a simple message of gratitude to Joe Rogan and Elon Musk for bringing her back on. "Raicilla for everyone!" She said. Since all of the controversy, Muprhy left her home in Vancouver and has taken up residence in Mexico. Murphy's reinstatement isn't just a win for free speech, it's a win for reality.

Past Twitter policies meant that people who did not believe in gender ideology essentially had to lie and say they did, ot face the wrath of the Twitter mods. In a dig at now ousted Twitter exec Vijaya Gadde, who was responsible for many of the policies that led to controversial bans, including Murphy's, she said simply "Men aren't women, Vijaya."

In 2018, Yaniv sued women in British Columbia for not wanting to wax Yaniv's male genitals. Yaniv claimed that this was discriminatory and took the case before a Human Rights Tribunal. Murphy was outspoken about Yaniv in fact being biologically male, and not female, despite Yaniv's assertions. 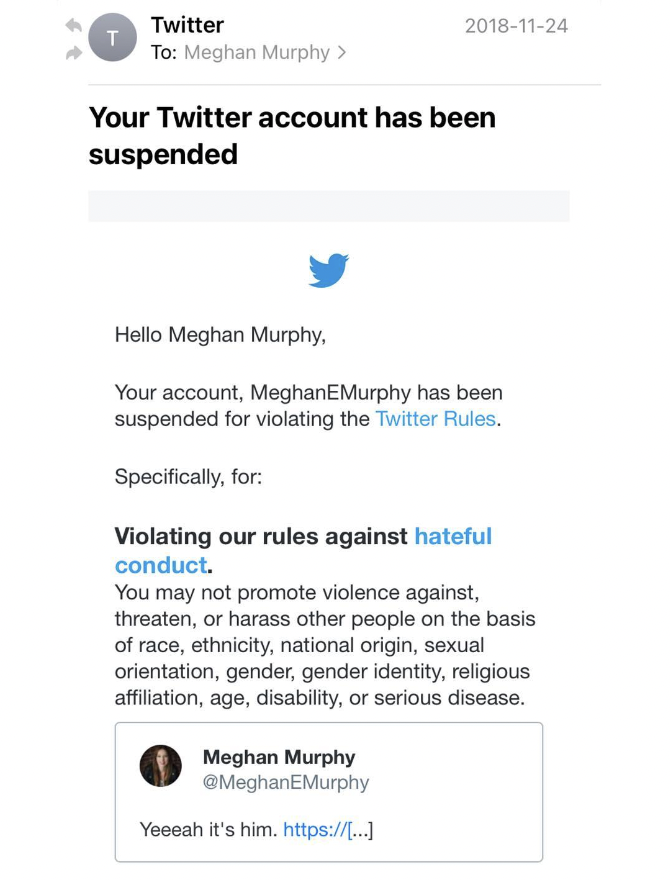 The women he brought suit against were immigrant women who performed waxing services for women in their homes. Waxing male genitals is not something they could do while upholding the tenets of their religion, regardless of how the holder of those male genitals identified.

Yaniv, trans advocate, alleged predator, and human rights tribunal litigant, successfully petitioned Twitter to ban outspoken feminist activist Murphy. Murphy's crime was referring to Yaniv with a male pronoun. That's it. That's literally all she did. Her account had about 25,000 followers at the time of the ban. Her account has already surpassed that at time of writing.

Murphy brought suit against Twitter over the ban, but a California court ruled against her. The court sited Section 230 of the Communications Decency Act, something that has been the subject of many conversations regarding online content, and the culpability, or lack thereof, of social media platforms over the content on their platforms.

Section 230 makes the designation that social media companies offer platforms, and not publication. "In sum, the trial court properly sustained Twitter’s demurrer without leave to amend because each of Murphy’s claims is barred under section 230(c)(1)," the judge stated.

In her defense, Murphy argued that the policy Twitter had at the time, allowing them to ban users "at any time, for any, or no reason," was a negation of Twitter's dedicated to being a pro-free speech platform.

When Musk proposed a plan to buy the platform, he stated unequivocally that he would uphold free speech, and in the weeks since he took over, he has done so. "New Twitter policy is freedom of speech, but not freedom of reach," Musk said. "Negative/hate tweets will be max deboosted & demonetized, so no ads or other revenue to Twitter."

In recent years, there has been fear among many Twitter users over speaking truth about biological sex, which is what got Murphy, and many others, banned, suppressed, locked out, and censored. Twitter moderators have been insistent on upholding the lie that people can change their sex, and that a person who is born one sex, but says they are the other sex, is automatically that other sex, regardless of reality.

Murphy came back to the platform and immediately told a truth that, even a few short weeks ago, would have led to supression and censorship. But with Musk's takeover, truth is back on Twitter.
ADVERTISEMENT
ADVERTISEMENT
meghan elon