The largest teachers union in the country adopted several actions in favor of critical race theory indoctrination in American schools during their Annual Meeting this weekend. 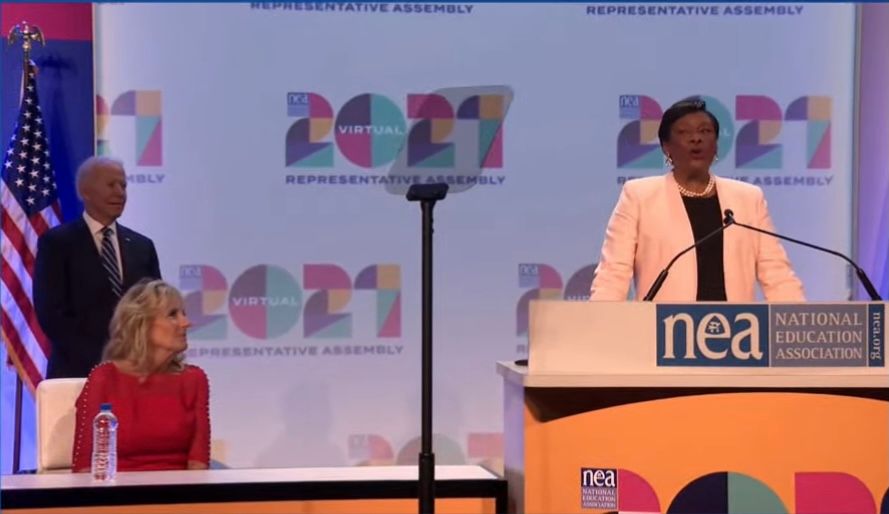 The NEA, which is the largest teachers union in the country, adopted several actions in favor of critical race theory indoctrination in American schools during their Annual Meeting and Representative Assembly this weekend.

The NEA's Business Item 39 states that the "USA's economy/social order is built on interactions between different cultures/races" and that "To deny opportunities to teach truth about Black, Brown, and other marginalized races minimalizes the necessity for students to build efficacy."

As such, they have decided to implement a plan that will publicize "information" on what critical race theory is and "what it is not." They will bring in staff to education union members who "want to learn more and fight back against anti-CRT rhetoric."

The plan will provide a "study that critiques empire, white supremacy, anti-Blackness, anti-Indigeneity, racism, patriarchy, cisheteropatriarchy, capitalism, ableism, anthropocentrism, and other forms of power and oppression at the intersections of our society, and that we oppose attempts to ban critical race theory and/or The 1619 Project."

They say that this will "convey [the NEA's] support for the accurate and honest teaching of social studies topics, including truthful and age-appropriate accountings of unpleasant aspects of American history, such as slavery, and the oppression and discrimination of Indigenous, Black, Brown, and other peoples of color, as well as the continued impact this history has on our current society. The Association will further convey that in teaching these topics, it is reasonable and appropriate for curriculum to be informed by academic frameworks for understanding and interpreting the impact of the past on current society, including critical race theory."

Moreover, the union intends to implement new special days in the school calendar, and to bring in Black Lives Matter to assist the creation of special education materials founded in critical race theory. These include celebrations of George Floyd's birthday on October 14, which will be "a national day of action to teach lessons about structural racism and oppression."

There will be an additional "day of action" that will "recognize and honor lives taken such as Breonna Taylor, Philando Castile, and others." The NEA will publicize this, as well as conduct "a virtual listening tour that will educate members on the tools and resources needed to defend honesty in education including but not limited to tools like CRT."

The NEA also committed over $50,000 to "research the organizations attacking educators doing anti-racist work." They are inspired to to do this because they say that "attacks on anti-racist teachers are increasing, coordinated by well-funded organizations such as the Heritage Foundation."

An additional proposal in the amount of $1,122,500 has been referred to committee that would "raise money for and create an awareness campaign to address the recent wave of state legislation that prohibits educators and courses from including certain concepts and facts because, according to the lawmakers sponsoring this legislation, they have the potential to make some people uncomfortable."

The NEA states that "As a part of this awareness campaign, NEA will work with coalition partners to raise funds to create a variety of public messages and will reach out to its members and well-recognized actors, musicians, and sports figures to solicit their input and help. This campaign will focus on the importance of teaching our students to be able to evaluate the influence of the intersections of identity, including but not limited to, exceptionality, ability, gender, gender identity, sexual orientation, age, race, ethnicity, religion, and socio-economic status, based on the experiences of peoples, groups, and events."

The NEA were staunch supporters of Biden's presidential campaign, and when he won the election in November 2020, they presented him with their "playbook" on education and how to get schools open after so much learning time was lost due to pandemic-inspired closures.

In addressing the assembly with First Lady Jill Biden on Friday, Biden praised the NEA, saying that their work and the work of their member educators was essential. He claimed that parents know that teachers need a raise after they had to "help" educate their kids at home. He did not address the issue of critical race theory, and the White House has deflected questions along those lines.