Psaki was grilled by Fox News' Peter Doocy and couldn't answer the simple question: "Do you think the people are leaving Cuba because they don't like communism?" 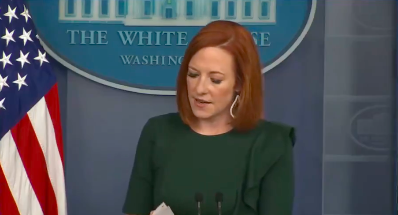 White House Press Secretary Jen Psaki refused to say the word "communism" when asked why Cubans are protesting in the streets and fleeing to neighbouring countries. Psaki was grilled by Fox News' Peter Doocy and couldn't answer the simple question: "Do you think the people are leaving Cuba because they don't like communism?"

Psaki also echoed the message that migrants should not come "through processes of trying to come to the border ... or coming by sea without going through an asylum application process."

Although this is different then what was said during the Presidential campaign, this is the same message that Vice-President Kamala Harris said during her trip in Guatemala.

Doocy asked, "Do you think the people are leaving Cuba because they don't like communism?" Psaki's answer was, "We think people are leaving Cuba or protesting in the streets as well because they're opposed to the oppression, to the mismanagement of the government in the country; and we certainly support their right to protest, we support their efforts to speak out against their treatment in Cuba," and then proceeded to go in detail about the refugee resettlement efforts for Cuban and Haitian nationals in the United States.

Doocy's question exposes the suspected hypocrisy of the "Squad" members and members of the administration remaining silent on the failures of communism in Cuba while supporting other human rights protests across the world. Conservatives are accusing the Democrats of not calling out communism by name because of their support for similar ideologies.

Sen. Marsha Blackburn asked, "[The Squad] are silent crickets when it comes to supporting the people of Cuba in their push for freedom. So the question is, are they supporting the communist regime?" Psaki's refusal to condemn the communist government by name seems to provide evidence in support of many conservatives' claims.