WATCH: Kamala Harris speaks in Guatemala, tells migrants NOT to come to America

“I want to be clear to folks in this region who are thinking about making that dangerous trek to the United States-Mexico border…Do not come. Do not come.” 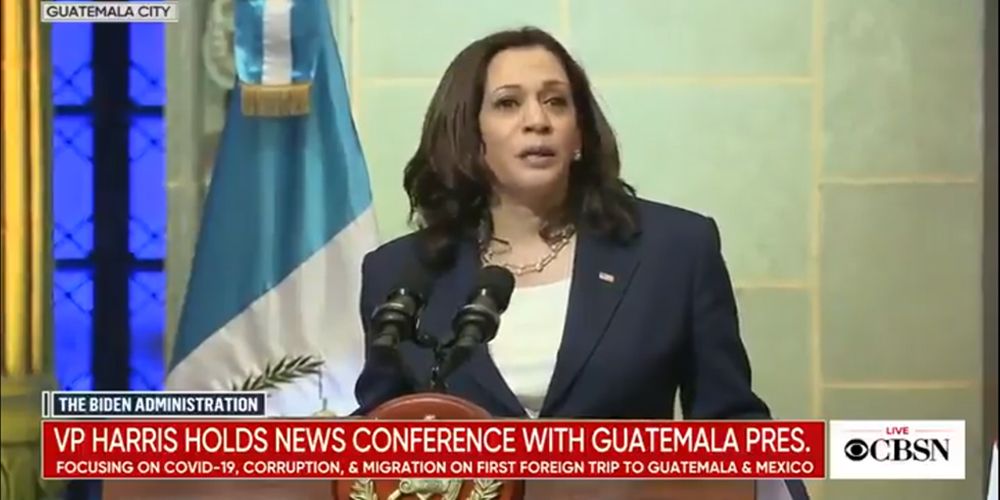 It was towards the end of March when President Joe Biden put Vice President Harris in charge of migration. Harris was an outspoken politician that at the onset of the Trump presidency opposed his administration's policy decisions surrounding the stopping of migration with a "big and beautiful" border wall.

Democrats back then sent a strong pro-immigration message that shocked many aspiring migrants about the lack of the Biden administration's willingness to follow through.

Fast forward to the beginning of June and the vice president's staff said she wouldn't be visiting the United States-Mexico border whatsoever. This despite the ongoing issue of unchecked migration coming into the America at an unprecedented record pace.

Instead, on Monday, Harris went further than south of the border, flying into Guatemala for a visit to President Alejandro Giammattei. Before her arrival today, Giammattei blamed the Biden administration themselves for creating the situation in America it's currently facing.

Upon her arrival, protesters greeted Harris with negative banners telling her things like "Trump won" and "go home."

Then came the vice president's news conference with Guatemala's president.

"And I want to emphasize that the goal of our work is to help Guatemalans find hope at home, at the same time I want to be clear to folks in this region who are thinking about making that dangerous trek to the United States-Mexico border … Do not come. Do not come."

"The United States will continue to enforce our laws and secure our border. There are legal methods by which migration can and should occur. But we, as one of our priorities, will discourage illegal migration. And I believe, if you come to our border, you will be turned back. So let's discourage our friends, our neighbors, our family members, from embarking on what is otherwise an extremely dangerous journey. Where in large part the only people who benefit are coyotes."

Coyote is a term that liberal "blue checks" mocked former President Donald Trump for using in a debate against Biden last year.

The Biden border crisis has created a situation untenable for Arizona's pair of Democrat senators, who publicly criticized the administration’s response early last month. At the beginning of June, Texas Gov. Greg Abbott declared a state of emergency over the ongoing migration situation hitting the border.

Today the media got a response from Harris as to why she wasn't there herself to see the conditions border patrol agents must face.

In response to a question from the Associated Press about why Harris hasn't visited the United States-Mexico border, the vice president responded that it was a Republican talking point levied against her.

"The reason I am here in Guatemala as my first trip as vice president in the United States is because this is one of our highest priorities," Harris said. She said going to Guatemala to make deals would yield more "real results" than "grand gestures."