"I will be sending a letter to the department of justice asking for a criminal referral because he has lied to Congress." 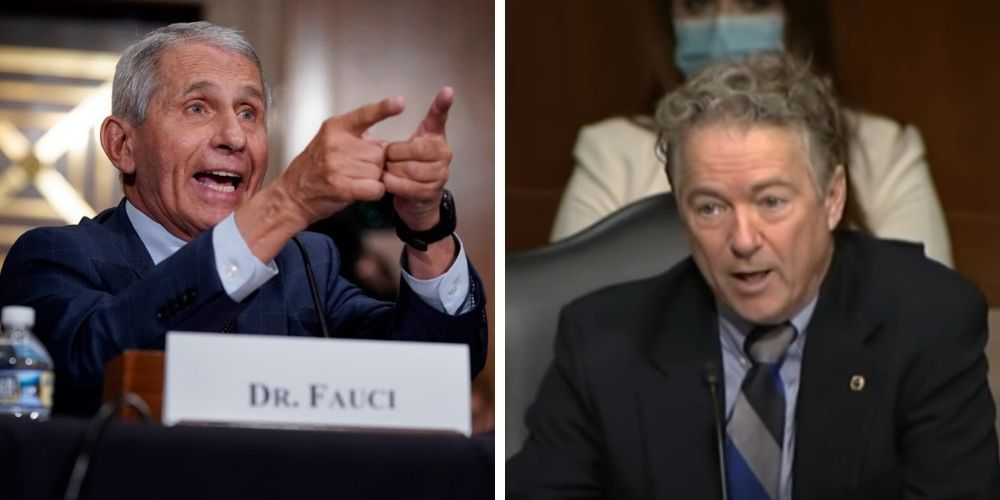 Senator Rand Paul (R-KY) told Sean Hannity on Fox News Tuesday night that he would be sending a criminal referral letter to the Department of Justice about Dr. Anthony Fauci.

Hannity reference Paul’s comments earlier in the day during a fiery hearing on Capitol Hill about the COVID-19 pandemic and asked the Senator, "You kicked off your questioning of Dr. Fauci emphasizing federal law makes lying to Congress, a felony punishable by up to five years in prison. Is your belief based on the evidence Senator that he lied before Congress and broke the law?"

Paul replied, "Yes, and I will be sending a letter to the department of justice asking for a criminal referral because he has lied to Congress."

The Senator said on Fox News Primetime that medical experts who have differing opinions than Dr. Fauci regarding COVID-19 won’t go public with their dissent fearing that it will affect their funding.

Paul said, "He’s been there for 40 years, probably 39 years too long, but he controls all the funding, so people are deathly afraid of him."

"I get letters from scientists all the time. You can find them. They’re very distrustful of what he’s saying," Paul added regarding Fauci, who has been director of the National Institute of Allergy and Infectious Diseases (NIAID) since 1984. "They don’t think he’s making sense. They don’t think he’s reading the science accurately, but they’re afraid to speak out because many of them are university scientists and they depend on NIH [National Institutes of Health] funds, and to cross him means it’s the last money you’ll ever get."

Paul is one of the most outspoke critics of Fauci. The two have frequently clashed during Senate hearings on the pandemic. Paul and Fauci engaged in another battle during a Congressional hearing earlier Tuesday, as the senator, an ophthalmologist, grilled the doctor on what he referred to as "gain of function" research at a Wuhan lab.

Paul detailed the evidence that he claims proves that experimentation on gain of function research was happening at the Wuhan Institute of Virology and quoted the doctor who did this work on both her work and on the amount of funding she received from the NIH.

"Senator Paul," Fauci began, "I have never lied before the Congress, and I do not retract that statement. This paper that you are referring to was judged by qualified staff up and down the chain as not being gain of function."

Paul interrupted, "You take an animal virus, and you increase its transmissibility to humans, you're saying that's not gain of function?" He asked incredulously.

Paul accused Fauci of obfuscating the truth, a charge which Fauci denied, saying "I want everyone to understand that if you look at those viruses, and that's judged by qualified virologists and evolutionary biologists, those viruses are molecularly impossible to result in SARS-COVID-2."

"No one is saying those viruses caused the pandemic," Paul clarified, "we're saying they are gain of function viruses because they were animal viruses that became more transmissible in humans, and you funded it. And you won't admit the truth."

"And you are implying," Fauci said, "that what we did was responsible for the deaths of individuals, and I totally resent that and if anybody is lying here, senator, it is you."

Paul first addressed to Fauci saying that it "is a crime to lie to congress." Paul went on, "On your last trip to our committee, on May 11, you stated that the NIH has not ever and does not now fund gain of function research in the Wuhan Institute of Virology. And yet, gain of function research was done entirely in the Wuhan Institute by Dr. Shi, and was funded by the NIH."

Paul entered a paper into the record for Congress, titled "Discovery of a rich gene pool of bat SARS-related coronaviruses provides new insights into the origin of SARS coronavirus."

Paul stated that in this paper Dr. Shi outlines her research, which Paul describes as "gain of function", the amount of funding from the NIH is noted, and the NIH is praised for having granted these funds for her research. Shi "took two bat coronavirus genes, spike genes, and combined them with a SARS related backbone to create new viruses that are not found in nature. The lab created viruses were then shown to replicate in humans," Paul read. It is this paper with which Fauci took issue.

"Viruses that in nature only impact animals," Paul said, "were manipulated in the Wuhan lab to gain the function of infecting humans. This research fits the definition of the research that the NIH said was subject to the 'pause' in 2014-2017, a pause in gain of function." Paul said, referencing the funding moratorium on gain of function research that was implemented in 2014 and lifted, by Fauci and others, in 2017.

Paul said that the NIH failed to recognize this, and it "never came under any scrutiny." Paul quoted other doctors who noted that this research into "novel coronaviruses was dangerous for humans." These were pathogens, Paul quoted, that these viruses are only found in the lab, and quoted a doctor saying that this practice "epitomizes gain of function research."

More credibility has been given to the theory that the coronavirus leaked from the Wuhan Institute of Virology rather than forming in nature or transmission from animals to humans in recent months.

CNN has reported that an increasing number of White House officials support the “lab leak theory.” In May, President Joe Biden ordered intelligence agencies to conduct a 90-day review of all material regarding the origins of the pandemic.