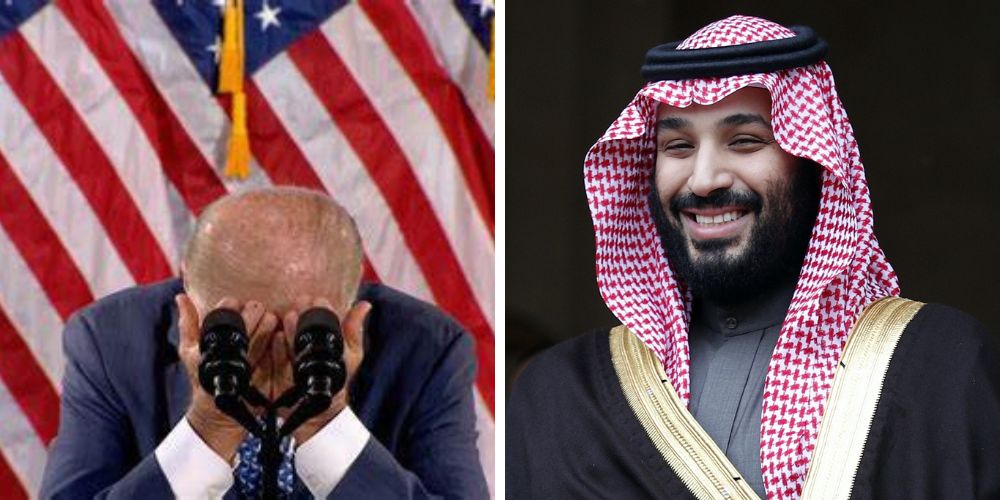 Ari Hoffman and Libby Emmons
Oct 13, 2022 minute read
ADVERTISEMENT
ADVERTISEMENT
The Biden administration urged Saudi Arabia and other OPEC+ members to delay announcing oil production cuts until after the November mid-term elections. Gas prices are foremost in the minds of American voters and are expected to play a major role in the control of Congress in the minds of voters. Saudi Arabia refused to go along with Biden's wishes, saying that they would be reducing their oil production, as would their Russian allies.

Biden then threatened to withhold Congressionally authorized arms sales to Saudi Arabia, making the stunning admission during a recent sit-down interview with CNN's Jake Tapper, in which he stated that Saudi Arabia would face "consequences for what they've done with Russia." Biden asked Saudi Arabia to delay their decision to cut oil production, and to drill more oil in the lead up to the November midterm elections, essentially to boost the Democratic Party by cutting gas prices.

Holding Congressionally authorized foreign funding hostage over a political conflict, or to coerce a nation into behaving according to the wishes of the White House, is exactly what Biden accused former President Trump of doing three years ago, which led directly to Trump's impeachment.

Tapper seemed oblivious to this conflict, but Human Events Daily Senior Editor Jack Posobiec pointed it out on Twitter, saying "Here is Biden in 2019 calling for Trump to be impeached for the exact same thing Biden is doing right now with Saudi Arabia," and quoting then-candidate Biden.

"Have we caught Joe Biden admitting to coercing a foreign country in furtherance of his own political interest? Yes, we have because he admitted it on live TV," Posobiec said on Human Events Daily. Biden, he said, "explicitly states that he is going to coerce Saudi Arabia by holding up congressionally approved military aid."

"So if you're going to be impeached for quid pro quos that involve withholding military aid, then my question is, where is President Biden calling for impeachment on himself? It's the exact same situation," Posobiec said.

"Back then it was Trump and Ukraine. Now it's Biden in the Saudis. So the question is simple: this was only the third impeachment in the history of the United States of America, and it was predicated on this theory of a quid pro quo between the two presidents."

"President Biden can sit there and admit that he's coercing the Saudis, the same way that he admitted before, but he was coercing the Ukrainians with a $1 billion loan to get the Ukrainian prosecutor fired. This guy is the father of the quid pro quo when it comes to modern American government."

Biden said in October 2019 "President Trump withheld Congressionally appropriated aid to Ukraine unless they granted him a political favor. It's the definition of quid pro quo. This is no joke—Trump continues to put his own personal, political interests ahead of the national interest. He must be impeached."

Trump had asked Ukraine's President Volodymyr Zelensky to look into why a prosecutor who was investigating energy giant Burisma, on whose board Hunter Biden sat, had been fired. Trump allegedly suggested that US aid to Ukraine would be withheld pending the investigation. Biden, as Vice President, had demanded the prosecutor be fired, under penalty of withholding funds. Trump wanted to know why Biden had wanted a Ukrainian prosecutor fired.

Biden, however, just did exactly the same thing. And then denied it.

"We believe by the decision that OPEC+ made last week, they're certainly aligning themselves with Russia and right now this is not a time to be aligning with Russia, especially this brutal, unprecedented war that they have started in Ukraine and we've been very clear about that," Biden's press secretary said of Saudia Arabia and OPEC's decision.

"It's categorically false to connect this to U.S. elections," said National Security Council spokesperson Adrienne Watson per the AP. "It's always been about the impact on the global economy and impact on families at home and around the world, especially as (Russian President Vladimir) Putin wages his war against Ukraine."

Yet Democrat Senator Bob Menendez, chair of the Senate Foreign Relations Committee, called for a freeze on cooperation with Saudi Arabia, which would include most arms sales. Menendez as chair has veto power over foreign arms sales and said in a statement that he "will not green light any cooperation with Riyadh until the Kingdom reassesses its position with respect to the war in Ukraine."

The production cutback is the largest since the beginning of the COVID-19 pandemic and will boost Russian oil prices which will in turn bankroll the country's invasion of Ukraine and thwart the West's efforts to choke off money to Moscow.

OPEC+ controls approximately 30 percent of the world's oil supply, and proceeded with the production cuts, resulting in maintaining high gas prices. Gas prices and inflation are one of the top issues on the minds of US voters in the upcoming election.

This summer Biden visited Saudi Arabia, and even gave a fist-bump to Crown Prince Mohammad bin Salman in an effort to convince the nation to produce more oil.

Following the US and European Union cutting off Russian oil exports, Moscow has instead been selling oil to Saudi Arabia which keeps the Russian oil for its own use and sells theirs on the open market. Energy ministers from OPEC+ and allied non-members, which include Russia, met at the group's Vienna headquarters last week.