A train derailment in BC led to a local school being evacuated. It happened approximately 40 kilometres east of Prince George 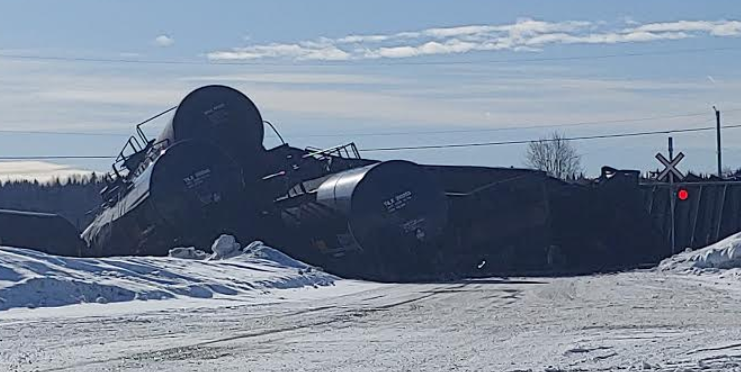 A train derailment in British Columbia led to a local school being evacuated. The train derailment happened approximately 40 kilometres east of Prince George, at 10 a.m. PST. It is still unknown what the train is carrying.

“On our way to town, at the Giscome crossing where the school is, there is a train wreck of propane tank cars — crumbled tanks,” said Catherine Kendall, a nearby farmer, to CBC. “My concern was the kids.”

Parents have been notified to pick up their children from the school or to take their children to another school for the remainder of the day. This is the second train derailment in two days, and the twelfth since December.

This is the second derailment in two days.

Yesterday, a train was derailed in Kingston, Ontario.

No injuries or cause was reported.

Other train derailments across the country have caused major headaches to companies moving cargo.

Two weeks ago, CN railway announced they were investigating after a train derailment in Sainte-Marie-Salome, Quebec.

That derailment happened just an hour north of Montreal, Quebec.

“Two cars derailed and there’s no danger for the public, no injuries, no fire and no dangerous goods are involved,” CN senior manager of public affairs Olivier Quenneville told CTV News.

A source reportedly told CTV News that they believe something was purposely put onto the tracks to derail the train. A CN spokesperson did not confirm whether or not that is true.

“The incident is still under investigation and we will not comment further,” said Quenneville.

That derailment also led to no injuries. An investigation is still ongoing into the cause.

The OPP stated that there was no danger to the public’s safety, though evacuations did take place.