"I think that it's completely ludicrous," said CNN guest Natalee Bingham, who identifies as a trans woman, yet continued to refer to the suspect by "them/them" pronouns during the segment. 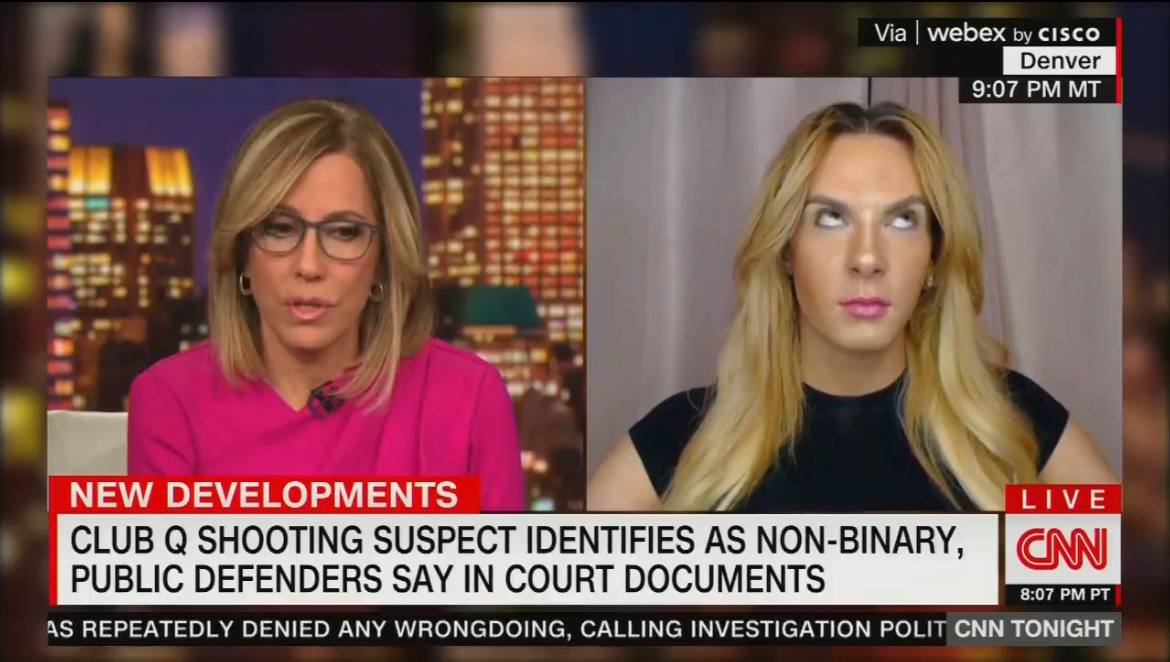 Roberto Wakerell-Cruz Montreal QC
Nov 23, 2022 minute read
ADVERTISEMENT
ADVERTISEMENT
A trans guest on CNN claimed that she can tell that the person who allegedly entered an LGBTQ Colorado nightclub Club Q and shot five people to death is not non-binary, as the suspect requested to be referred to as on court documents.

Anderson Lee Aldrich allegedly killed five people at Club Q at around midnight on Friday. Since then, it has been revealed through the suspect's lawyer that the suspect identifies as non-binary, with court documents attesting to the use of "they/them" pronouns and listing the suspect's title and name as "Mx. Aldrich."

"The attorneys for the shooter are now saying that the shooter is non-binary, and the shooter would like to use the pronouns 'they/them' for the court and all court papers, and that's what Anderson Aldrich's attorneys are saying. Do you have any thoughts on that?" asked anchor Alisyn Camerota.

"I think that it's completely ludicrous," said CNN guest Natalee Bingham, who identifies as a trans woman. "I believe they're just saying that because they want to have the easy way out on this. That's really, really offending, especially being a transgender woman myself, that a male, which it was obvious with the mugshot, that's a man."

"That's not a non-binary person because in no way, shape, or form could they appear as a woman the next day. It's really offensive to really hear that, that they're playing that role. If they're non-binary, why would you go after the club where you feel safe?" Bingham asked while continuing to use the suspect's preferred pronouns. "Why would you do that to a community where you are welcomed in if you are non-binary?" Bingham concluded.

Merriam-Webster defines nonbinary as "relating to or being a person who identifies with or expresses a gender identity that is neither entirely male nor entirely female."

Aldrich allegedly opened fire with a semiautomatic rifle inside the nightclub in Colorado Springs, killing five people and injuring 17 before being subdued by patrons, including a former US Army vet, and arrested by police, who arrived within minutes.

Richard M. Fierro, a veteran of the US Army, was with his family at the club when the shooting began. He describes how his instincts kicked in and, without even thinking, he intervened. He was able to take down and subdue the shooter until police arrived.

"We thank the quick reactions of heroic customers that subdued the gunman and ended this hate attack," the nightclub posted on their Facebook page on Sunday.

Police records show a man with the exact same name allegedly threatened his mother with a homemade bomb, forcing neighbors in surrounding homes to evacuate while the bomb squad and crisis negotiators talked them into surrendering.