BREAKING: Trudeau clamps down on Iran after getting ROASTED by Poilievre

Trudeau announced that Canada would take steps that will "raise the bar internationally in holding Iran accountable," falling short, however, of declaring the IRGC a terrorist entity. 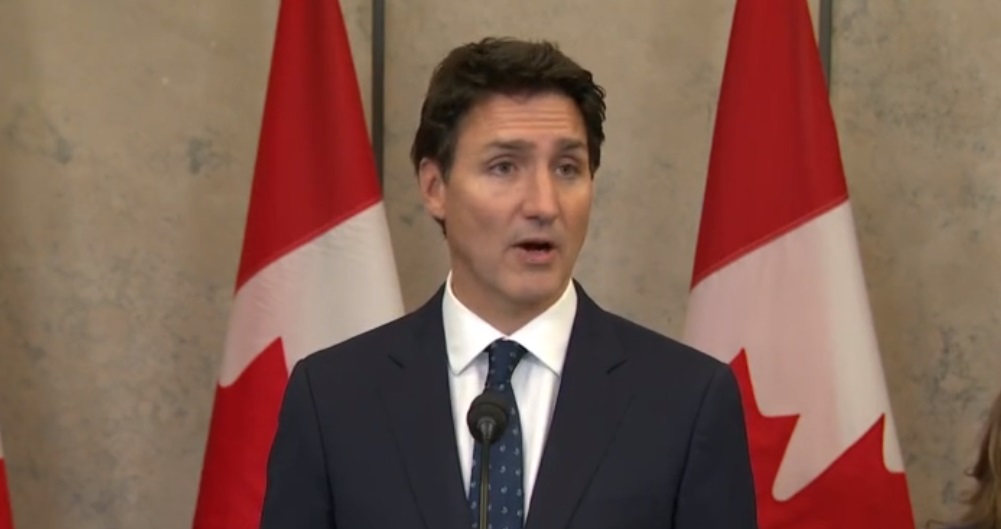 Roberto Wakerell-Cruz Montreal QC
Oct 7, 2022 minute read
ADVERTISEMENT
ADVERTISEMENT
Prime Minister Justin Trudeau announced on Thursday that he will list Iran's IRGC under the most powerful part of Canada's Refugee and Immigration Act. The announcement came just days after the prime minister was held to task on the issue by Conservative Leader Pierre Poilievre.

"The Iranian regime continues its irresponsible disregard for human rights. The women and people of Iran have had enough of this oppressive regime," Trudeau began.

"We will continue to stand with the families of flight PS-752 victims. This week marked 1000 days since Iranian missiles shot down the plane which contained dozens of Iranian Canadians," he continued.

"Canada has some of the toughest measures on Iran of any country in the world. For years, we've been condemning Iran's support for terrorism and destabilizing behaviour in the region, including by declaring it a state sponsor of terrorism.

"Just a few days ago, we announced new sanctions against 25 members of the Iranian leadership, and nine entities," Trudeau said of the list, which includes military top leadership of the IRGC and of Iranian intelligence, who he says are "directly responsible" for brutality and crimes."

Trudeau announced that Canada would take steps that will "raise the bar internationally in holding Iran accountable."

The prime minister said Canada will pursue a listing of the Iranian regime including the IRGC leadership under the "most powerful provision of the immigration and refugee protection act."

"This is a measure that has only been used in the most serious circumstances against regimes conducting war crimes or genocide, like in Bosnia and Rwanda," Trudeau explained, adding that this measure would make the top 50 percent of the IRGC leadership, "the over 10,000 officers and senior members most responsible for this heinous state behaviour, inadmissible to Canada, denying them access to Canadian territory, and opportunities."

Trudeau said that the designation of a regime is a "permanent decision," saying that more than 10,000 members of the IRGC leadership will no longer be able to enter Canada "forever."

Trudeau also said that Canada's capacity to tackle foreign interference and money laundering will be increased, and that work would be accelerated to help agencies with this task. Trudeau said that $76 million would go towards Canada's "overall capacity to implement sanctions."

"We have recognized that Iran is a state sponsor of terrorism," Trudeau replied. Trudeau explained, "The Canadian Criminal Code is not the best tool to go after states or state entities, but we will continue to look at all tools we can use to do it," when askd why the IRGC would not be added to the list of terrorist entities.

In a statement on the Conservatives' website, they wrote: "We the undersigned call on the Canadian government to stand with the people of Iran fighting for their freedom against their tyrannical dictatorship."

"Whereas the Iranian dictatorship’s morality police murdered a 22-year-old woman, Mahsa Amini, because she dared to confront the Iranian regime and fight for her freedom. Her message has now inspired protests in Iran and around the world of people rising up to join her fight.

"Whereas the Islamic Revolutionary Guard Corps (IRGC) is responsible for shooting down Flight PS752, which killed 55 Canadians and 30 permanent residents.

"And whereas this Liberal government still refuses to recognize the IRGC as a terrorist organization, allowing them to legally operate here in Canada.

"Therefore be it resolved that we call on this Liberal government stand up to the Iranian dictatorship, list the IRGC as a terrorist organization, and support the Iranian people’s fight for their freedom," they wrote.