"She was one of my favourite people in the world," Trudeau said, "and I will miss her so." 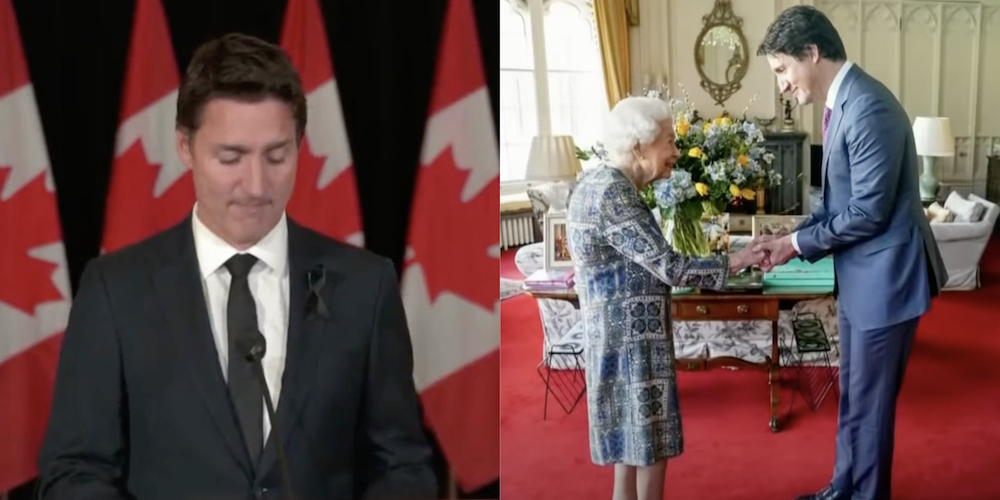 Following the death of Queen Elizabeth II on Thursday afternoon, support from world leaders poured in as they expressed their sadness and offered condolences to the Royal Family.

Among them was Canadian prime minister Justin Trudeau, who delivered a raw, emotional statement, referring to the monarch as one of his "favourite people in the world."

"It is with the deepest of sorrow that we learned today of the passing of Her Majesty Queen Elizabeth II," Trudeau began. "She was our Queen for almost half of Canada's existence, and she had an obvious, deep, and abiding love and affection for Canadians."

"She served us all with strength and wisdom for seventy years as we grew into the diverse, optimistic, responsible, ambitious and extraordinary country we are today."

Trudeau went on to point out that he was the twelfth Canadian prime minister to serve under the Queen's rule, adding that he was having trouble believing that his most recent visit with her ended up being the last. "I will so miss those chats," he said.

"She was thoughtful, wise, curious, helpful, funny, and so much more," he continued. "In a complicated world, her steady grace and resolve brought comfort and strength to us all. Canada is in mourning."

"She was one of my favourite people in the world," Trudeau concluded, "and I will miss her so."

According to an official statement out of Buckingham Palace, Queen Elizabeth II passed away peacefully at Balmoral surrounded by her family.

Following her death, now king Charles expressed his sadness, and acknowledged that "her loss will be deeply felt throughout the country, the Realms and the Commonwealth, and by countless people around the world."