"Members of that team came to 'view him as the leader of a terrorist group responsible for violence/deaths comparable to Christchurch shooter or Hitler and on that basis and on the totality of his Tweets, he should be de-platformed.'" 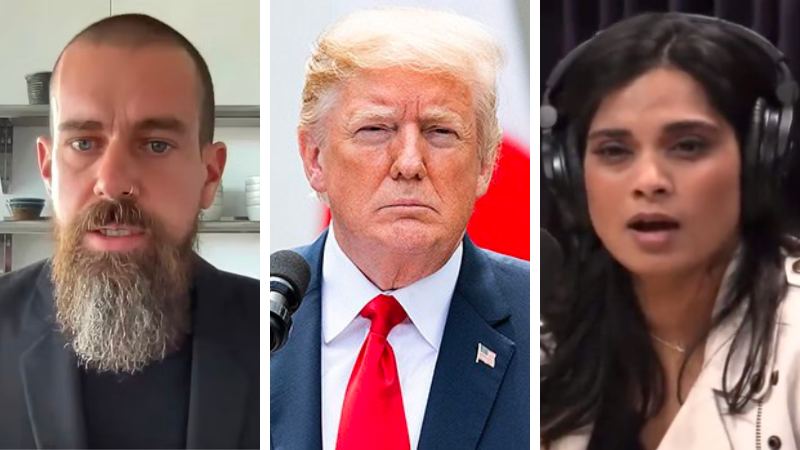 Bari Weiss released the latest segment of the Twitter Files on Monday afternoon, continuing to cover the removal of President Donald Trump from Twitter, while he was a sitting president, only days after the Capitol riot of January 6, 2021.

"On the morning of January 8, President Donald Trump, with one remaining strike before being at risk of permanent suspension from Twitter, tweets twice."

Weiss tracked the tweets from the Oval Office in real time, recording what Trump said, and when, on January 8, the morning before he was banned.

"6:46 am: 'The 75,000,000 great American Patriots who voted for me, AMERICA FIRST, and MAKE AMERICA GREAT AGAIN, will have a GIANT VOICE long into the future. They will not be disrespected or treated unfairly in any way, shape or form!!!

"For years, Twitter had resisted calls both internal and external to ban Trump on the grounds that blocking a world leader from the platform or removing their controversial tweets would hide important information that people should be able to see and debate," Weiss reported.

She noted the policy that kept Trump on the platform despite repeated calls from both inside Twitter and from prominent Democrats, like Michelle Obama, and pundits to ban him.

"'Our mission is to provide a forum that enables people to be informed and to engage their leaders directly,' the company wrote in 2019. Twitter’s aim was to 'protect the public’s right to hear from their leaders and to hold them to account.'"

"But after January 6, as @mtaibbi and @shellenbergermd have documented, pressure grew, both inside and outside of Twitter, to ban Trump," Weiss reported.

"Maybe because I am from China," she quoted one employee saying on January 7, "I deeply understand how censorship can destroy the public conversation."

Another employee responded with an attempt to quell the Chinese employee's fears, saying "I understand this fear, but also I think it's important to understand that censorship by a government is very different than censorship of the government. The first amendment in the US—and similar legislation in other countries with similar concepts—exist specifically to prevent the government from silencing the people."

"I respect that but realistically we impose far stricter rules on effectively everyone else on the platform," said another."

Another said "We started labelling/restricting his tweets when they became a threat to Democracy, and it seemed like that was our redline; yesterday, he clearly attempted to overthrow our Democratic system of government and showed no signs of remorse... if this is not a clear reason to suspend him (again, as an unhinged ruler attempting to subvert the most powerful Democracy in the world), I'm not sure what would be."

Dissent to the ban, Weiss noted, was definitely not the norm at Twitter HQ. In fact, it was employees that banded together to ban Trump, calling it "the elephant in the room." Others looked for employees to become activists within the company to seek Trump's banning.

"We have to do the right thing and ban this account," Weiss quoted one staffer as saying.

While another said it's "pretty obvious he’s going to try to thread the needle of incitement without violating the rules."

Then the Washington Post got on board, publishing an op-ed from Twitter employees, addressed to then CEO Jack Dorsey, demanding Trump be removed from the platform.

"We must examine Twitter’s complicity in what President-Elect Biden has rightly termed insurrection," it read.

Despite this, staff who were assigned to determine policy violations did not actually find any violations. "But the Twitter staff assigned to evaluate tweets quickly concluded that Trump had *not* violated Twitter’s policies. 'I think we’d have a hard time saying this is incitement,' wrote one staffer," Weiss reported.

While some staffers took aim at Trump's voters, others continued to express that they did not see any incitement. "Don't see the incitement angle here," Weiss reported a staffer saying.

"'I also am not seeing clear or coded incitement in the DJT tweet,' wrote Anika Navaroli, a Twitter policy official. 'I’ll respond in the elections channel and say that our team has assessed and found no vios'—or violations—'for the DJT one,'" Weiss reported.

"She does just that: 'as an fyi, Safety has assessed the DJT Tweet above and determined that there is no violation of our policies at this time.'"

Weiss notes that Navaroli later testified before the House Select January 6 Committee, at which time she told Congress: "For months I had been begging and anticipating and attempting to raise the reality that if nothing—if we made no intervention into what I saw occurring, people were going to die."

Twitter's team determined that Trump's 7:44 am tweet was not a violation. "It’s a clear no vio. It’s just to say he’s not attending the inauguration."

Weiss notes that Twitter deals with other heads of state, as well, such as those in Iran, Nigeria, and Ethiopia. "In June 2018, Iran’s Ayatollah Ali Khamenei tweeted, “#Israel is a malignant cancerous tumor in the West Asian region that has to be removed and eradicated: it is possible and it will happen.” Twitter neither deleted the tweet nor banned the Ayatollah," Weiss reported.

She tracked through concerns about the former Malaysian Prime Minister, who said it was "a right" for Muslims to "kill millions of French people," and that while the tweet was deleted for "glorifying violence," the Prime Minister still has his Twitter account.

"Muhammadu Buhari," Weiss reported, "the President of Nigeria, incited violence against pro-Biafra groups. 'Those of us in the fields for 30 months, who went through the war,' he wrote, 'will treat them in the language they understand.' Twitter deleted the tweet but didn't ban Buhari."

She tracked through Twitter's handling of Ethiopian Prime Minister Abiy Ahmed in 2021, who called for war against Tigray, as well as Prime Minister Narendra Modi’s call to arrest Twitter employees in India if accounts he wanted banned did not stay banned.

Nevertheless, Twitter employees moved to ban Trump, despite there being no violations. And it was Vijaya Gadde who made the call.

"Less than 90 minutes after Twitter employees had determined that Trump’s tweets were not in violation of Twitter policy, Vijaya Gadde—Twitter’s Head of Legal, Policy, and Trust—asked whether it could, in fact, be 'coded incitement to further violence,'" Weiss reported.

Then things began to escalate.

"A few minutes later, Twitter employees on the 'scaled enforcement team' suggest that Trump’s tweet may have violated Twitter’s Glorification of Violence policy—if you interpreted the phrase 'American Patriots' to refer to the rioters." Weiss reported.

"Members of that team came to 'view him as the leader of a terrorist group responsible for violence/deaths comparable to Christchurch shooter or Hitler and on that basis and on the totality of his Tweets, he should be de-platformed.'"

"'Multiple tweeps [Twitter employees] have quoted the Banality of Evil suggesting that people implementing our policies are like Nazis following orders,' relays Yoel Roth to a colleague."

"One hour later, Twitter announces Trump’s permanent suspension 'due to the risk of further incitement of violence.'"

This ban opened the door for Twitter employees to begin banning medical information. "By the next day, employees expressed eagerness to tackle 'medical misinformation' as soon as possible," Weiss reported.

"For the longest time, Twitter’s stance was that we aren’t the arbiter of truth," Weiss quoted an employee as saying, "which I respected but never gave me a warm fuzzy feeling."

Rising CEO Parag Agrawal noted to Head of Security Mudge Zatko "I think a few of us should brainstorm the ripple effects" of Trump's ban, and that "centralized content moderation IMO has reached a breaking point now."

While other world leaders, such as heads of state in Germany, France, and Mexico, all took issue with Trump's ban