FBI Agent Elvis Chan and "other law enforcement agencies repeatedly primed Yoel Roth to dismiss reports of Hunter Biden’s laptop as a Russian 'hack and leak' operation," but no intelligence existed of such an operation. 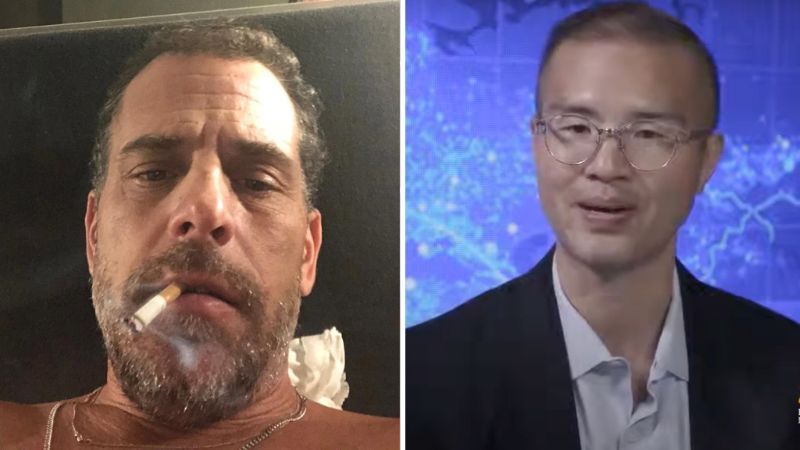 "1. TWITTER FILES: PART 7 The FBI & the Hunter Biden Laptop How the FBI & intelligence community discredited factual information about Hunter Biden’s foreign business dealings both after and *before* The New York Post revealed the contents of his laptop on October 14, 2020."

"In Twitter Files #7, we present evidence pointing to an organized effort by representatives of the intelligence community (IC), aimed at senior executives at news and social media companies, to discredit leaked information about Hunter Biden before and after it was published."

"The story begins in December 2019 when a Delaware computer store owner named John Paul (J.P.) Mac Isaac contacts the FBI about a laptop that Hunter Biden had left with him On Dec 9, 2019, the FBI issues a subpoena for, and takes Hunter Biden's laptop."

"By Aug 2020, Mac Isaac still had not heard back from the FBI, even though he had discovered evidence of criminal activity. And so he emails Rudy Giuliani, who was under FBI surveillance at the time. In early Oct, Giuliani gives it to @nypost"

"Shortly before 7 pm ET on October 13, Hunter Biden’s lawyer, George Mesires, emails JP Mac Isaac. Hunter and Mesires had just learned from the New York Post that its story about the laptop would be published the next day."

"8. The next day, October 14, 2020, The New York Post runs its explosive story revealing the business dealings of President Joe Biden’s son, Hunter. Every single fact in it was accurate."

"9. And yet, within hours, Twitter and other social media companies censor the NY Post article, preventing it from spreading and, more importantly, undermining its credibility in the minds of many Americans. Why is that? What, exactly, happened?"

"10. On Dec 2, @mtaibbi described the debate inside Twitter over its decision to censor a wholly accurate article. Since then, we have discovered new info that points to an organized effort by the intel community to influence Twitter & other platforms."

"11. First, it's important to understand that Hunter Biden earned *tens of millions* of dollars in contracts with foreign businesses, including ones linked to China's government, for which Hunter offered no real work. Here's an overview by investigative journalist @peterschweizer"

"12. And yet, during all of 2020, the FBI and other law enforcement agencies repeatedly primed Yoel Roth to dismiss reports of Hunter Biden’s laptop as a Russian 'hack and leak' operation. This is from a sworn declaration by Roth given in December 2020."

"13. They did the same to Facebook, according to CEO Mark Zuckerberg. 'The FBI basically came to us [and] was like, 'Hey... you should be on high alert. We thought that there was a lot of Russian propaganda in the 2016 election. There's about to be some kind of dump similar to that."

"14. Were the FBI warnings of a Russian hack-and-leak operation relating to Hunter Biden based on *any* new intel? No, they weren't 'Through our investigations, we did not see any similar competing intrusions to what had happened in 2016,' admitted FBI agent Elvis Chan in Nov."

"16. In fact, Twitter debunked false claims by journalists of foreign influence on its platform 'We haven’t seen any evidence to support that claim' by @oneunderscore__ @NBC News of foreign-controlled bots. 'Our review thus far shows a small-scale domestic troll effort…'"

"17. After FBI asks about a WaPo story on alleged foreign influence in a pro-Trump tweet, Twitter's Roth says, 'The article makes a lot of insinuations... but we saw no evidence that that was the case here (and in fact, a lot of strong evidence pointing in the other direction)'."

"18. It's not the first time that Twitter's Roth has pushed back against the FBI. In January 2020, Roth resisted FBI efforts to get Twitter to share data outside of the normal search warrant process."

"19. Pressure had been growing: 'We have seen a sustained (If uncoordinated) effort by the IC [intelligence community] to push us to share more info & change our API policies. They are probing & pushing everywhere they can (including by whispering to congressional staff)'."

"20. Time and again, FBI asks Twitter for evidence of foreign influence & Twitter responds that they aren’t finding anything worth reporting. '[W]e haven’t yet identified activity that we’d typically refer to you (or even flag as interesting in the foreign influence context)'."

"22. Then, in July 2020, the FBI’s Elvis Chan arranges for temporary Top Secret security clearances for Twitter executives so that the FBI can share information about threats to the upcoming elections."

"24. Recently, Yoel Roth told @karaswisher that he had been primed to think about the Russian hacking group APT28 before news of the Hunter Biden laptop came out. When it did, Roth said, 'It set off every single one of my finely tuned APT28 hack-and-leap campaign alarm bells'."

"25. In Aug, 2020, FBI’s Chan asks Twitter: does anyone there have top secret clearance? When someone mentions Jim Baker, Chan responds, 'I don't know how I forgot him' — an odd claim, given Chan's job is to monitor Twitter, not to mention that they worked together at the FBI."

"26. Who is Jim Baker? He's former general counsel of the FBI (2014-18) & one of the most powerful men in the U.S. intel community. Baker has moved in and out of government for 30 years, serving stints at CNN, Bridgewater (a $140 billion asset management firm) and Brookings"

"27. As general counsel of the FBI, Baker played a central role in making the case internally for an investigation of Donald Trump"

"28. Baker wasn't the only senior FBI exec. involved in the Trump investigation to go to Twitter. Dawn Burton, the former dep. chief of staff to FBI head James Comey, who initiated the investigation of Trump, joined Twitter in 2019 as director of strategy"

"29. As of 2020, there were so many former FBI employees — 'Bu alumni' — working at Twitter that they had created their own private Slack channel and a crib sheet to onboard new FBI arrivals."

"30. Efforts continued to influence Twitter's Yoel Roth. In Sept 2020, Roth participated in an Aspen Institute 'tabletop exercise' on a potential 'Hack-and-Dump"' operation relating to Hunter Biden The goal was to shape how the media covered it — and how social media carried it"

"32. By mid-Sept, 2020, Chan & Roth had set up an encrypted messaging network so employees from FBI & Twitter could communicate. They also agree to create a 'virtual war room' for 'all the [Internet]' industry plus FBI and ODNI” [Office of the Director of National Intelligence]."

"33. Then, on Sept 15, 2020 the FBI’s Laura Dehmlow, who heads up the Foreign Influence Task Force, and Elvis Chan, request to give a classified briefing for Jim Baker, without any other Twitter staff, such as Yoel Roth, present."

"34. On Oct 14, shortly after @NYPost publishes its Hunter Biden laptop story, Roth says, 'it isn’t clearly violative of our Hacked Materials Policy, nor is it clearly in violation of anything else,' but adds, 'this feels a lot like a somewhat subtle leak operation.'."

"35. In response to Roth, Baker repeatedly insists that the Hunter Biden materials were either faked, hacked, or both, and a violation of Twitter policy. Baker does so over email, and in a Google doc, on October 14 and 15."

"36. And yet it's inconceivable Baker believed the Hunter Biden emails were either fake or hacked. The @nypost had included a picture of the receipt signed by Hunter Biden, and an FBI subpoena showed that the agency had taken possession of the laptop in December 2019"

"37. As for the FBI, it likely would have taken a few *hours* for it to confirm that the laptop had belonged to Hunter Biden. Indeed, it only took a few days for journalist @peterschweizer to prove it."

"38. By 10 am, Twitter execs had bought into a wild hack-and-dump story 'The suggestion from experts - which rings true - is there was a hack that happened separately, and they loaded the hacked materials on the laptop that magically appeared at a repair shop in Delaware'."

"39. At 3:38 pm that same day, October 14, Baker arranges a phone conversation with Matthew J. Perry in the Office of the General Counsel of the FBI"

"40. The influence operation persuaded Twitter execs that the Hunter Biden laptop did *not* come from a whistleblower. One linked to a Hill article, based on a WaPo article, from Oct 15, which falsely suggested that Giuliani’s leak of the laptop had something to do with Russia."

"41. There is evidence that FBI agents have warned elected officials of foreign influence with the primary goal of leaking the information to the news media. This is a political dirty trick used to create the perception of impropriety."

"43. 'The unnecessary FBI briefing provided the Democrats and liberal media the vehicle to spread their false narrative that our work advanced Russian disinformation'."

"45. In the end, the FBI's influence campaign aimed at executives at news media, Twitter, & other social media companies worked: they censored & discredited the Hunter Biden laptop story. By Dec. 2020, Baker and his colleagues even sent a note of thanks to the FBI for its work"

"46. The FBI’s influence campaign may have been helped by the fact that it was paying Twitter millions of dollars for its staff time. 'I am happy to report we have collected $3,415,323 since October 2019!' reports an associate of Jim Baker in early 2021."

47. And the pressure from the FBI on social media platforms continues In Aug 2022, Twitter execs prepared for a meeting with the FBI, whose goal was 'to convince us to produce on more FBI EDRs' EDRs are an 'emergency disclosure request,' a warrantless search."

"In response to the Twitter Files revelation of high-level FBI agents at Twitter, @Jim_Jordan said, 'I have concerns about whether the government was running a misinformation operation on We the People'."