The account that took screenshots of leftist’s sudden change of viewpoint on a situational basis of seeming convenience, has been removed from the platform. 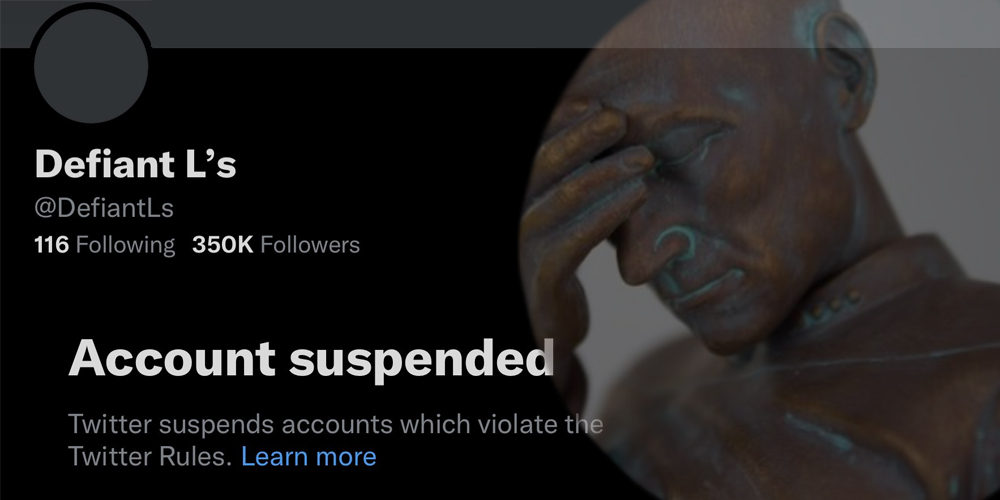 On Tuesday evening, Twitter removed the "Defiant L’s" account from their social media platform. At the time of its suspension, it had amassed over 350,000 followers due to its highlighting the hypocrisy of prominent liberal figures.

This spotlight on a particular subset of modern online life is also a specialty that made Libs of TikTok popular.

According to someone who reached out to the account holder, the stated reasoning behind Defiant L's suspension is allegedly ban evasion.

"Hey Twitter, so about an hour ago my account @DefiantLs was suspended. The word currently is 'ban evasion' though I've never had an account suspended so I've never had a ban to evade. Regardless, I've appealed the suspension and will keep everyone updated. Until then, I can be found at Instagram @defiant.ls and also on GETTR at @defiantls ha. Thanks for all the support and kind words. I hope to chat with you all again soon. Have a drink and keeping honking <3 DefiantLs."

It’s one of many high-profile site suspensions and bannings so far this year: Matt Walsh over talking about gender, independent journalist Leeroy Johnson was filming an anti-mandate protest in NYC, The Post Millennial’s Katie Daviscourt wanted a trucker convoy demonstration to happen in the USA, and journalist Matthew Foldi was suspended back on Monday after sharing video footage of a gunman that got into a shootout with police at the University of Chicago.

The reactions from the general public are coming in.

"Yo @TwitterSupport I would like to know how a Twitter account that literally just quotes the exact words of people violated any of your stupid rules."

"Are you kidding me?"

"Of course. Anyone impactful here on the politics of politics is up against a clock."

"Why would @DefiantLs be suspended from Twitter when all they do is post screenshots of leftists tweets? You know who won't ban them? @GETTRofficial."