Each charge of first degree intentional homicide is classified as a Class A felony, which could carry sentences of life in prison each. The Court Commissioner stated that he saw probable cause for each of these charges. 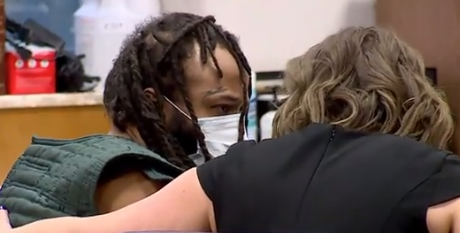 Darrell Brooks, accused of driving his car intentionally into a Christmas parade in the town of Waukesha, Wisc. on Sunday, appeared in court for to face five homicide charges on Monday. Brooks was apprehended after the incident and was taken into custody.

Each charge of first degree intentional homicide is classified as a Class A felony, which could carry sentences of life in prison each. The Court Commissioner stated that he saw probable cause for each of these charges.

The prosecution brought up Brooks' previous criminal record. His past crimes were in many states, and go back to 2005. The crimes of which he was previously convicted included violent offenses. Brooks has two open charges in addition to the homicide charges.

"There's a long history of flights, obstructing, bail jumping type behavior, Your Honor," the prosecutor said, before going on to list additional charges for which he failed to appear in court. There are numerous warrants out for Brooks' arrest.

Given this extensive criminal history, the state said that they have "very significant concerns about Mr. Brooks' flight history and willingness to obey the law."

They anticipate filing an additional charge of intentional homicide for a sixth victim, an 8-year-old boy. That boy later died from his injuries. The state's complaint covers over 60 victims who were struck by the car on Sunday.

In asking for a large bail sum, $5 million, the state said that "there are not words to describe the risk that this defendant presents to our community, not only flight risk, but the dangerous that he presents his history of violence and the allegations in this complaint..."

Brooks' defense stated that the defendant was poor, and could not fund a large bail sum. The Court Commissioner detailed that conditions under which bail would be determined, which included a prohibition of Brooks' having use of a vehicle.

The Court Commissioner noted that these homicide charges come while Brooks is already out on bail for other alleged crimes.

"I believe you are a flight risk," the Court Commissioner said, "there's a failure to follow court orders."

"You don't do well under pressure," the Court Commissioner told Brooks. "You don't respond well to what is common sense within our community, within our society," he went on. "Those smallish bails that you were out on didn’t do very well."

The Court Commissioner ordered DNA be taken from Brooks before discussing bail.