"We also believe very much in empowering and engaging activists and creating grassroots movements... to fight legislation and with actions to suppress voters around the country," Psaki said. 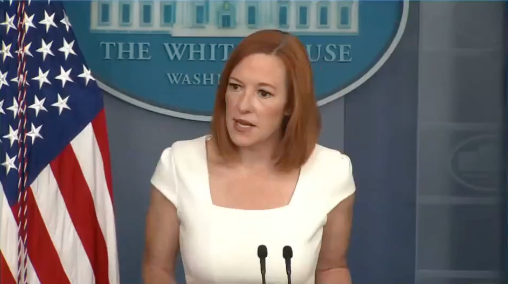 Speaking to reporters on Thursday, Press Secretary Jen Psaki addressed the Biden administration's efforts to interfere in voting rights laws that have either passed or are up for consideration in many states across the US.

A key component for the administration, Psaki said is that "We also believe very much in empowering and engaging activists and creating grassroots movements, something that the vice president is continuing to play a very prominent and prevalent role in doing, is also a part of how we're going to fight legislation and with actions to suppress voters around the country."

The Department of Justice under Attorney General Merrick Garland has taken up a lawsuit against the state of Georgia over their recently enacted voting laws, saying that they are discriminatory. However, the Supreme Court upheld the voting laws of Arizona in a recent case. Congressional Democrats are interested in passing the For the People Act, which according to West Virginia Senator Manchin, is a "sweeping election reform bill" proposed by Democrats, that at "more than 800-page bill has garnered zero Republican support"

Psaki was asked what the Biden administration intends to do in the face of these defeats of their voting law agenda. Psaki said in response that the Democratic National Committee is working on these efforts. She also said that the vice president will be "elevating" these efforts.

These efforts will be in addition to "levers" from the federal government, Psaki said, noting that Biden "is not waiting to have the legislation on his desk."

She took a question from another reporter on voting rights, who wondered if the administration had concerns that "elevating voting rights a Democratic platform issue will give Republicans more fodder to make partisan attacks."

"No," Psaki said, and quickly moved on.

At the beginning of the press conference, Psaki outlined the plans for voting interference, saying that the reason for this is because of the "lies" that led to the Capitol right. She said that "Our constitutional rights are on the line because state legislatures have forced through a wave of anti-voter laws based on the same repeatedly disproven lies that lead to an assault on our nation's Capitol."

The president has been vocal on his concerns about voting laws, saying that Georgia's new laws are a manifestation of "Jim Crow" laws, that were outlawed many decades ago.