The interview with Trump garnered over five million views in the first day it was posted before it was suddenly deleted by Youtube. 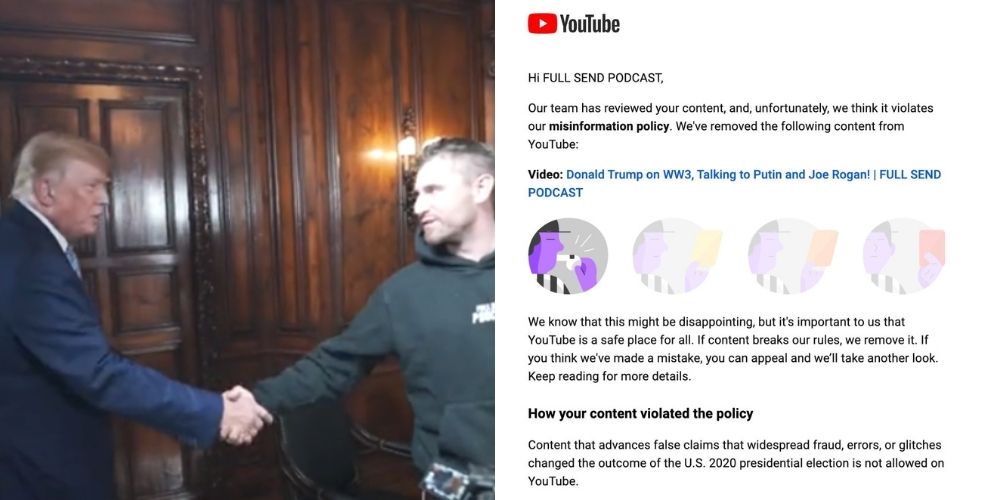 On Wednesday, popular Youtuber’s the Nelk Boys posted their interview with former President Donald Trump on their Full Send podcast.

The popular Canadian and American pranksters have over 7 million subscribers and over a billion views. In October of 2020, Trump called the NELK Boys onstage during a campaign rally and during the interview co-host Kyle Foregeard reminisced about being invited on Air Force One to meet Trump while he was still in office.

The interview with Trump became the number one podcast on multiple platforms and garnered over five million views in the first day it was posted before it was suddenly deleted by Youtube on Thursday.

Following the video veing removed by Youtube, the NELK Boys tweeted out, "Youtube has DELETED our trump episode that over 5M views in 24 hours," as well as a copy of the email they received from the platform informing them that the video had been removed.

The video is available on Rumble.

Trump called into the Sean Hannity show on Fox News Thursday night and reacted to the news of the video being removed.

Hannity said, "I guess if your name's Donald Trump, you got canceled. If you're an Ayatollah in Iran and you threatened to wipe Israel off the map, you don't get canceled. Maybe you can explain that to me."

Trump said he was told about the NELK boys by president of the UFC Dana White and agreed to do the show. "I did it and it was, we had a lot of fun. It was a half hour or so, and it became very much a sensation because they had 6 million hits in a very short period of time. It was the number one they've ever done."

"I told them. I said, don't worry, it'll be taken down because I'm doing it. It'll be taken out. We talked about very good things. And we talked about a lot of policy, good policies, including energy, independence, and all of that. And I just heard a little while ago, they got taken down."

Trump then slammed Big Tech and the media. "This is not a free press. Big tech is a disaster. And our country is a much different place. What they're doing is really terrible."

Donald Trump Jr. posted to Twitter after the video was removed, "Youtube deleted the @fullsendpodcast with my father, just like he predicted they would, because they don't believe in free speech.Time to put the podcast up on @rumblevideo!!!"

The letter from Youtube said that the video violated the platform's content policy for having "...false claims that widespread fraud, errors, or glitches changed the outcome of the U.S. 2020 presidential election..."

During the interview, Trump also claimed that the 2020 election was "rigged."

Trump spent the interview joking with the hosts and showering them with compliments.

Trump also said that there "…could be a chance of World War III" because the US is no longer respected. He also said there was "zero chance" Russian President Vladimir Putin would have invaded while he was still President and partially blamed the invasion of Ukraine on President Joe Biden's disastrous withdrawl from Afghanistan.

Co-host Bob Menery even offered to caddy for Trump on the golf course. "Donald, well the good news is, can I, worst case scenario, I used to caddy at a golf club. Can I caddy for you?"

Trump replied, "You can be my caddy anytime."

Trump said during the interview, "In the history of our country, nothing like me has ever happened. I don't say that positive, negative. You know, you've never had a businessman."

"So, you had soldiers and you had politicians," Trump added, "there's never been an outsider."